Never previously having encountered truth from the Lithuanian Government, I was overjoyed to hear Lithuanian President Nauseda speak at the Malmo International Forum on Holocaust Remembrance. He stated firmly – “truth about historical facts is required”. Every Lithuanian President has said this, none have yet been truthful.

In 1995, President Brazauskas stood before the Israeli Knesset and admitted that Lithuanians had murdered their Jewish neighbors. 96.4% of Lithuanian Jews were slaughtered. The highest murder rate in Europe.

Only 0.04% of Lithuanians are found to have rescued Jews which leaves 99.96% of Lithuanians either perpetrators, bystanders or have insufficient proof of their unsubstantiated claims. Almost every Lithuanian I have ever met claims their family were rescuers and their family saved Jews. They just never seem to have any names of the rescued, details or corroboration. With a survival rate of only 3.6%, the claimed rescues were obviously unsuccessful. Perhaps the supposed Lithuanian rescuers only saved the furniture or jewelry belonging to Jews?. Perhaps every Lithuanian collaborated in saving the exact same Jew? After all, Lithuanians are highly skilled at collaboration, and, in my personal experience, very low on truthfulness.

Usually, genuine rescuers remained silent, having to hide their bravery from their neighbors who might have killed them in retaliation for having saved a Jew. I have personally met a few Lithuanians whose grandparents claimed to be rescuers, but, were actually perpetrators. They lied to their family to cover up their crimes.

The immediate past President of Lithuania, Dalia Grybauskaite was equally vocal in public that accurate Holocaust memory was required. Her words were inspirational, her actions the opposite. In a 2017 letter, President Grybauskaite delivered a masterpiece of Holocaust distortion. Her letter is here. 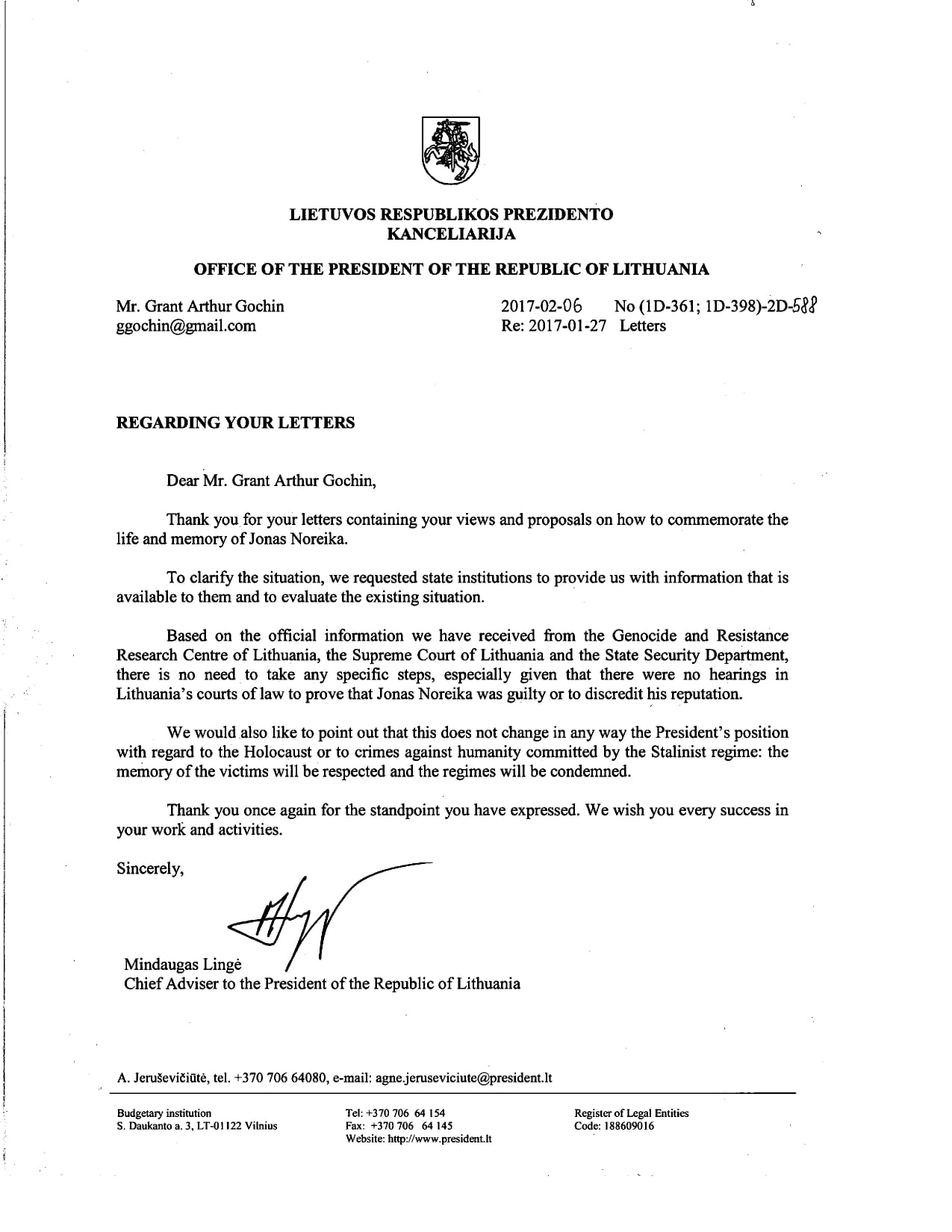 An uneducated reader could not possibly comprehend the depths of dishonesty of her response, I disassemble it below in explanation:

Thank you for your letters containing your views and proposals to commemorate the life and memory of Jonas Noreika.

To clarify the situation, we requested state instructions to provide us with information that is available to them and to evaluate the existing situation.

Based on the official information we have received from the Genocide and Resistance Research Center of Lithuania, the Supreme Court of Lithuania and the State Security Department there is no need to take any specific steps, especially given that there were no hearings in Lithuania’s courts of law to provide that Jonas Noreika was guilty or to discredit his reputation.

The Genocide and Resistance Research Center of Lithuania is the Governments center of historical fraud in Lithuania. They are an institution with negative credibility. Their task is to rewrite history.

This letter shows that the Supreme Court of Lithuania and the State Security Department are in collusion with the President and the Genocide Center as proof of Noreika’s crimes have been known and available since 1984 – 13 years before President Brazauskas honored him. The only impediment to established fact is Lithuania’s disdain for truth.

There were no hearings in Lithuania’s courts as Noreika died before Lithuania regained independence. Soviets did punish Holocaust perpetrators; Lithuanians rehabilitated them and gave them national honors.

It is not possible to put a dead person on trial, therefore Noreika could not be tried. The President’s intention is to distract.

Neither Hitler, Stalin, Putin or Lukashenko were ever placed on trial, therefore, by President Grybauskaite’s own assertion, their reputation should also not be discredited.

Courts in Lithuania declined to hear the facts of Noreika’s crimes, ensuring President Grybauskaite’s position that he was never tried. This was collusion by all branches of government to rewrite history. Lithuanian Courts are not known for independence and judicial decisions are for sale (as confirmed by President Nauseda).

Lithuania does not hold persecutors of Lithuanians to this same standard, having discredited the reputations of those that collaborated with Soviets against Lithuanian citizens. Holding murderers of Jews as completely innocent, and heroes of the nation, while holding others accountable for their crimes is classical antisemitism. Lithuania is an antisemitic state.

We would also like to point out that this does not change in any way the President’s position with regard to the Holocaust or to crimes against humanity committed by the Stalinist regime: the memory of the victims will be respected and the regimes will be condemned.

President Grybauskaite specifically mentions crimes by Soviets – this is a distraction. She deliberately omits crimes perpetrated by Lithuanians. This is not only Holocaust revisionism, but classical antisemitsm. Omitting condemnation of crimes by Lithuanians while honoring known Holocaust perpetrators is Holocaust distortion.

Thank you once again for the standpoint you have expressed. We wish you every success in your work and activities.

President Grybauskaite has aspirations for high political office in the European Union or the European Council. Surely such blatant Holocaust distortion would preclude her from consideration for High Office? Would modern Europe elect an open Holocaust revisionist to power? It is up to us to ensure that the European electorate knows her ideology.

Similarly, Lithuanian Ambassador Darius Semaska, the grandson of a Holocaust perpetrator who has also been falsely converted into a national Lithuanian hero, and also deceitfully declared a rescuer of Jews, tweeted this masterpiece of Holocaust revisionism. 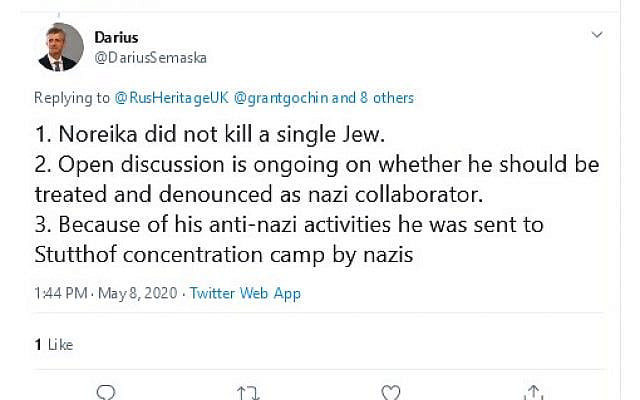 Ambassador Semaska is correct on the first point. Just like Hitler, Stalin, Eichmann and others, Noreika did not kill a single Jew. He issued the orders for them to be killed. Anywhere around 14,500 Jews murdered at Noreika’s behest. Therefore, not a singular Jew murdered by his own hand. Masterful revisionism. Semaska depends on the ignorance and antisemitism of his audience.

Nothing could be further from the truth. The Lithuanian Courts refused to hear any of the facts of the case, and the government doubled down on their Holocaust fraud. Per President Grybauskaite’s letter, the Lithuanian Supreme Court and the State Security Department are colluding in the deception.

This is so deceptive that for this singular comment alone, Ambassador Semaska should be held in contempt. Noreika opposed Nazis only after he had completed his genocide of Jews. His opposition was based on his pro-Lithuanian nationalism. Given his slaughter of Jews, Nazis made Noreika into an “Honored Prisoner” with extraordinary privileges, including the right to rape Jewish Concentration Camp victims, at his will. Semaska places this irrelevant factoid in order to distract, and leaves out all the relevant details. This is Holocaust distortion.

Unlike many, I am sure that the current President of Lithuania is an honorable man. President Nauseda stated in front of an audience of European and other world leaders, that truth must be told about the Holocaust. I am sure he was not manipulating them to create a false image of credibility in Lithuania. I’m sure Nauseda is ethical, and so, with every confidence in his sincerity, I have asked him to do so. My letter to President Nauseda is here.

President Nauseda regularly rails against the historical revisionism of his enemy, Russia. He speaks against Russian governmental misinformation and disinformation. He explains to the world that Russia uses false information as a tool of war. Certainly, Nauseda does not want to make a fool of himself on the world stage and show he is a hypocrite by doing exactly what he accuses his enemy of doing. If he is not truthful, his statements at Malmo would make him a liar and untrustworthy by anybody.

Already, Lithuania’s Defense Minister Anusauskas is an exposed Holocaust distorter. We know the President does not want to sink to his dastardly level. Defense Minister Anusauskas’s willingness to distort facts about the greatest crime in history, calls into question his truthfulness on every issue, including and especially the use of foreign military to defend Lithuania. After all, if Aunusakas can distort about the murder of 220,000 of his own Lithuanian citizens, why would he possibly care about the lives of American soldiers that might be lost in his war? Obviously he would not. Obviously. If both the President and the Minister of Defense are shown as non credible, how could any leader entrust their soldiers into Lithuanian custody?

Nauseda told the world that he stands for western values, for truth and human dignity. This claim assures us he is not a dishonest hypocrite and it gives the world confidence he will tell the truth, as already established by US Congress, the International Holocaust Remembrance Alliance, and all credible historians that study the Holocaust in Lithuania.

The world is now watching and already knows the facts, so we are also certain Nauseda will not try to distract as his predecessor did. He will not try to shift responsibility because his institutions of government have already been exposed as dishonest. These last threads of credibility lie on his shoulders.

By statute, President Nauseda has 20 days in which to reply. Being an honest man that opposes antisemitism, I am certain he is eager to clarify the facts. His response is due on November 22, 2021. I am convinced that Nauseda will be the first Lithuanian leader to tell the world the truth. I am confident he will show the International Holocaust Remembrance Alliance they can revoke their definition of his country as fraudsters. I am certain he wants the world to know that his word means something and can be taken at face value, rather than him immediately be dispensed as disinformation, and his country again identified as dishonest players.

I’m eagerly waiting for November 22. I will report back.