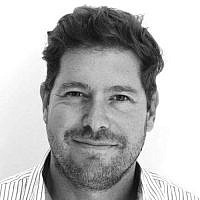 The Blogs
Yoel Guzansky
Apply for a Blog
Please note that the posts on The Blogs are contributed by third parties. The opinions, facts and any media content in them are presented solely by the authors, and neither The Times of Israel nor its partners assume any responsibility for them. Please contact us in case of abuse. In case of abuse,
Report this post. 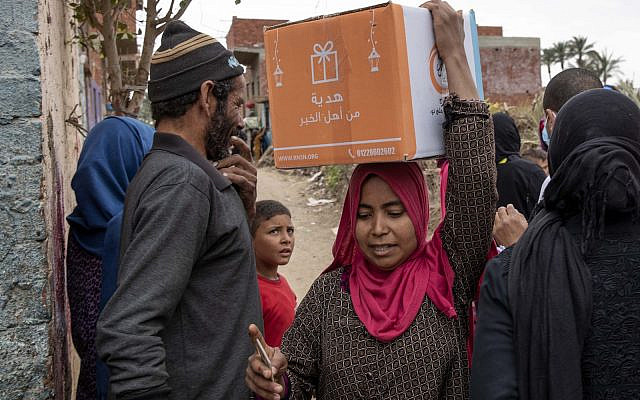 In Cairo, Egypt, a woman carries a carton filled with food distributed by the non-governmental organization Resala Nour Ala Nour to people who have been highly affected by the coronavirus outbreak. April 9, 2020. (AP Photo/Nariman El-Mofty)

The outbreak of the coronavirus pandemic created a global health crisis. Its prolongation could also produce a food-supply crisis with broad geopolitical implications, particularly here in the Middle East.

The United Nations World Food Program has warned several times in recent weeks that the coronavirus pandemic might increase world food shortage. David Beasley, the head of WFP, said last week he fears a famine of “biblical proportions,” as the number of those suffering from acute hunger is expected to raise from 135 million to 250 million, mostly in countries involved in violent conflicts.

Even before the pandemic’s outbreak, the WFP warned of a growing number of people suffering from hunger and malnutrition due to violent conflicts and climate change. Senior executives in the global food industry also warn that trade restrictions and the disruption of logistical supply chains caused by the pandemic might double the number of people suffering from hunger around the world, estimated at 800 million before the outbreak.

World governments are concerned by the decision by Russia, a leading grain exporter (including to Israel, Turkey, Egypt, Iran, Syria, UAE, and Lebanon) to impose export quotas. Moscow claims that this is only a precautionary measure and that the volume of grain exports will remain similar to last year. Last week, Russia even supplied a shipment of wheat to Saudi Arabia for the first time. Now, however, Russia’s willingness to export “as usual” could be presented as a non-trivial goodwill gesture. Meanwhile, Vietnam and India are limiting their exports of rice; Ukraine has restricted its export of buckwheat; and Egypt has capped its export of vegetables.

Despite the difficulty in assessing the scope of the pandemic in the Middle East, presumably, the coronavirus outbreak is far more severe than the official reports of many Arab countries due to poor governance, limited testing, and cover-up. Therefore, it behooves Israel to pay special attention.

So far, there have been no reports of substantial food shortages or price hikes. However, in the Middle East, there are many failing states that even under normal circumstances struggle to provide basic needs to their citizens, countries that suffer from civil wars and from chronic shortage of water.

The coronavirus pandemic might exacerbate an already dire situation and pose a threat to the food security of many of the region’s people. On top of that, speculative intervention and public panic might also drive-up food prices and create shortages.

Many Arab countries lack the basic conditions to sustain modern agriculture mainly because of water shortage and their dependency on food imports is high. Population growth rates and climate change, which led to weather warming and droughts, along with a large number of refugees, have increased the demand for food imports.

Arab regimes are refraining from raising food prices as they fear aggravating political risks. In the past, the fear of basic food shortages accelerated public discontent and exposed additional repressed social problems. The Egyptian government is particularly cautious – ever since 1977, fluctuations in the price and availability of the pitta-bread led to widespread riots. Cuts to subsidies of the pitta-bread prices in Jordan (2017) and Egypt (2018) led to demonstrations, although they did not pose a risk to the regimes’ stability.

Any further disruption to trade would be damaging for the Gulf Countries given that the six rely on imports for most of their food consumption.

Seemingly, food shortages in Middle East countries do not directly harm Israel’s security. However, they might worsen structural challenges facing the Arab world, such as migration and refugees, terror, and religious radicalization, which in turn, could raise Israel’s “maintenance costs” for preserving its position as a “villa in the jungle”.

As an independent food producer, Israel could leverage its expertise and technological capabilities to offer assistance to its neighbors. Beyond the obvious humanitarian reasoning, such an initiative could offer an opportunity to expand Israel’s cooperation with Egypt and Jordan beyond security cooperation and allow those countries to decrease their dependency on powerful food suppliers, such as Russia.

Prior to the pandemic, Israel excelled in cooperative projects to export advanced agricultural expertise with major food producers, such as China, Russia, and Ukraine and other countries in dire need for food. The incoming new Israeli government could use this asset to support the recovery of the Israeli agricultural sector already in the coming months. It might become one of the growth engines of the Israeli economy in the post-covid-19 world.

This article was co-authored with Daniel Rakov, an expert on great power competition in the Middle East from INSS (Institute of National Security Studies)

About the Author
Expert on Gulf security, advisor, lecture with many years of experience in the governmental and think tank worlds. I'm a senior fellow at INSS. My most recent book, Fraternal Enemies: Israel and the Gulf Monarchies, co-authored with Prof. Clive Jones, was published by Oxford University Press in 2020.
Related Topics
Related Posts
Comments