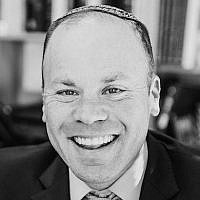 The Blogs
Steven Abraham
Apply for a Blog
Advertisement
Please note that the posts on The Blogs are contributed by third parties. The opinions, facts and any media content in them are presented solely by the authors, and neither The Times of Israel nor its partners assume any responsibility for them. Please contact us in case of abuse. In case of abuse,
Report this post.

When I sat down in early May to to put put my thoughts down on paper in “It’s time to say ‘yes’” I never could have imagined the outpouring of support from congregants, colleagues, friends and acquaintances. In addition I heard from those who disagreed with my position, I am indebted to those who object to my belief and for making me both question and reaffirm my own position.

In addition to hearing short bits of feedback I had individuals from USY and college, friends for whom I had lost touch, who took the time to write about their own personal choices. I didn’t know their life choices but for many they married someone who was not Jewish, the individual was not accepted in the synagogue of their youth and right or wrong, walked away…nevertheless they took the time to write. What prompted me to write was that true apathy, a true disregard for Jewish roots would have kept their voices silent. The reason a decision or creative new approach is needed, is that there is still a chance of engaging these Jews, those at the tale end of Generation X, with the same movement that created these loving, caring Jewish adults.

While I heard from many, the group that shocked me the most, and is the reason I continue to be so passionate, was the number of young Jews currently in an interfaith relationship. The common theme throughout almost all their stories was the same. My parents sent me to Hebrew school or Jewish Day School, went to Jewish Summer Camp, was involved in youth group, attended a university with a Jewish community and yet I fell in love with someone not Jewish. One such email ended – “It wasn’t on purpose, I wasn’t trying to upset my family, it just happened”. Ironically we know this story as it’s the same one that has been told by Jewish parents for over 20 years when their son or daughter brings home a non-Jew. Nevertheless, these young adults were reaching out to a rabbi over email because they thought perhaps I would understand “I’m not trying to turn my back on Judaism”, one said “but my family and synagogue appear to think this is an all or nothing proposition”.

Over the past few week a number of thought provoking articles have been published most notable Rabbi Amichai Lau-Lavie’s paper entitled “Joy”. As well as Rabbi Daniel Klein’s article on why Conservative Rabbis must think creatively about Intermarriage, and another by Rabbi Danny Gordis about why the Conservative Movement will eventually cave on the issue of Intermarriage.Most recently a beautiful article by Rabbi Abby Treu was published in the New York Jewish week, entitled “Intermarriage Issue Is Not About Rabbis”, talking specifically about the role of rabbis in and their authority, or lack thereof, in today’s world. There is no single answer for every community, only a wealth of ideas steeped in Torah and love.

“because her [a rabbis] commitment to the halakhic framework makes this impossible and her understanding of what are the limits of her authority as a rabbi do not include the facilitation and participation in Jewish rituals where one of the actual performers of the ritual is not Jewish”.

This is the same halakhic framework that allows for driving on Shabbat and officiation at a marriage between a Kohen and a divorcee or convert? Transgressions, according to the Torah that I would think far outweigh that of interfaith marriage. It is also this same framework that rightfully allowed the ordination of women and the marriage of same-sex couples. It is a framework, a tool to guide us in our decision making, not a wall to hide behind when a tough decision comes before us.

JTS in a statement “On Marriage and Covenant: A Statement by JTS” says:

“We understand the arguments made for our clergy to officiate at interfaith weddings, knowing that they come from a place of genuine concern for bringing near individuals and families who are or might be estranged from the community and tradition we love. However, we believe—and the data confirm—that by far the most effective path toward building a Jewish future is to strengthen Jewish identity, beginning with the Jewish family.”

Yet by saying “we believe – and the data confirms” is plainly saying, we have read the numbers put out by demographers and social scientists that tell us which route to follow. That argument does not even attempt to enter into the halakhic framework.

Analogously, for years educators have bemoaned the practice of teaching abstinence only in our school systems. To my knowledge, they did not disagree because it isn’t the best form of birth control, but because the facts on the ground tell us that our children are in relationships and they require more information than simply being told “wait till your married”. I agree that endogamy may be ideal, but its not the reality of where things stand today. There are times to be aspirational and there are times to be realistic.

The genius of the halakhic system is trying to replicate the moves, the thought process, the erudition of the rabbis of old. I sometimes wonder if the rabbis of the Mishnah and Gemara were alive today if they would scold us for relying to heavily on their precedents rather than doing what is best for the Jewish people.

About the Author
Rabbi Steven Abraham came to Beth El as Assistant Rabbi in July of 2011 and was named Beth El’s congregational Rabbi in August of 2013. He is the father to two beautiful children, daughter Naama, and son Leor. He graduated from the rabbinical school at the Jewish Theological Seminary, where he also received an M.A. in Jewish Education. Before attending JTS, he earned his B.S. in Business Management from the University of Baltimore. Most recently, he earned a Certificate in Interfaith Families Engagement program at Hebrew College. In college and rabbinical school, Rabbi Abraham was actively involved with USY as a group leader on multiple summer programs, including USY on Wheels and Summer in The City, and staffed NATIV. Rabbi Abraham currently sits on multiple local and national boards. He is a member of the board of the Boys and Girls Clubs of the Midlands, the National Board of United Synagogue of Conservative Judaism, Israel Bonds National Rabbinic Advisory Council, is a founding Board Member of The Nebraska Religious Council for Reproductive Freedom and was recently selected to be a member of Leadership Omaha Class of 43.
Related Topics
Related Posts
Comments