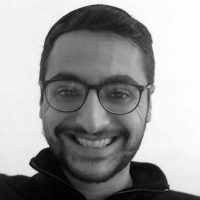 The past couple of weeks have been a tumultuous time for me since the protests erupted in Iran. To watch some of the images and videos coming out where innocent students are running for their life, teenage girls are being beaten by men, can break a soul.

There is a song that a Persian singer in Iran released called baraye, which means “for.” In the song, he recites a litany of things that have caused him to mourn for the people of Iran. It’s a beautiful song.

Here in Israel there is a festive atmosphere with the holiday of Sukkot quickly approaching. As I was making my own preparations, as a Persian Jew, I kept thinking about what my fellow countrymen are going through. I sat down and wrote this poem, also called “For,” where I share what makes me grieve for my people in Iran.

For my grandfather, who spent his life longing to return to Iran
For my father, who dreams of visiting the city he grew up in, with his son

For my parents, who even after 40 years Iran never left their heart
For the 10 million who fled because they were torn apart

About the Author
Menachem Zaman resides in Jerusalem, Israel with his wife and two kids.
Related Topics
Related Posts