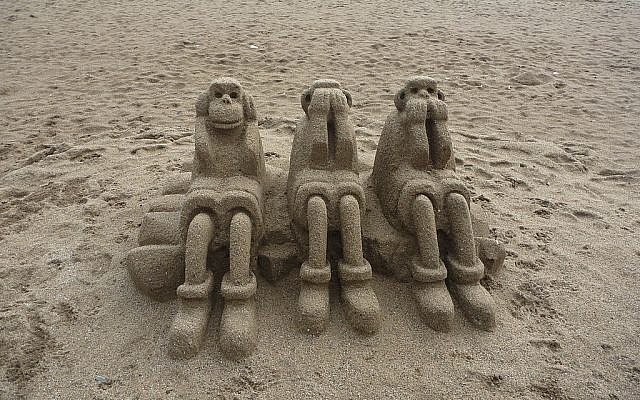 How to censor anti-Bibi speech? Publish only the positives.

The Israeli courts are now re-re-reconsidering the sufficiency of the Bibi-indictments. I will leave it to them to determine if the allegations rise to the level of Israeli criminal violations.

But there is more on the table. By virtue of Netanyahu’s own initiative, we are also a Jewish state, so there are Jewish implications involved, as well. Like G’neyvat Daat[1]– (theft of thought), along with the moral violations involved in pressuring the press for positive coverage, and the deprivation of the liberty of independent thought that usurpation of free press coverage brings.

To quickly dispense with some of the faux legal defenses produced by various Netanyahu hacks, à la ex-Professor Dershowitz’ lack of precedent argument – that quacks.[2] When there is no precedent, we have what is called “cases of first impression”. Just because someone is the first on the block to commit a particular crime, does not get them off, as Dershowitz would have us believe (more g’nayvat data), simply because no one did it beforehand.

Worse still, is the failure to appreciate the reason this particular crime (of impeding free press) is not often found in a democracy, and that is that controlling the press is the hallmark of anti-Democracy – that’s the kind of thing we don’t do. States or governments that do control, pressure, seduce, or manipulate the press are known as totalitarian governments, autocracies, or theocracies. In a Democracy we pride ourselves on Free Press. That means government officials don’t mess around with what others want to say.

Abuse of Power and the Double Standard

In other such situations marked by asymmetry of power- sexual harassment cases, for example, the mere fact that the “seducer” is in a position of power is sufficient to infer impropriety. When word goes out the “Supreme Leader”, who, coincidentally is also in charge of awarding contracts and other lucrative sweets by virtue of his self-claimed stewardship of a multiple of agencies, and has a passion for positive press, the seductive power is far too intense for the ordinary mercenary Israeli to resist. And who could blame them? Does one really need particulars to punish such pressure, be it gracefully cloaked or amorphous in tone? Do we really need an in-your-face bill of sale to convict that power abuser, at least in the court of morality?  That the Israeli courts are NOW searching for the jots and tittles in a bill of particulars is certainly a double standard when, for example, Joe Biden was criticized for merely sniffing a woman’s hair.

The Cost of Free Press vs. Expensive Real Estate

And how much positive pressure will suffice to implicate the Prime Minister, per the Courts? There is an old adage that the most expensive real estate in New York is a half an inch in the New York Times. The reason is that space in a newspaper is finite. For every decision to publish one thing, something else is rejected. For every pro-Bibi piece, an anti-Bibi piece is omitted. By pressuring for more positive press, Netanyahu simultaneously committed two infractions: pressuring the press for positive publicity and preempting negative publicity.  Censorship of negative press is effectuated, albeit indirectly.

But the inquiry becomes more subtle – how much cooption of editorial choice is required before the official’s actions are deemed improper?  Will a quarter page of laudatory prose in an important newspaper rise to the level of bribery? Or do we need a full-page, color, entry? Does the perpetrator need to spell out the exact advertising slogan required, or is it sufficient for him to imply what he seeks – in general terms, such that any “expert” pressman would get the message?

Apparently, the Israeli courts do not have the body of free speech literature available to them to put the Prime Minister’s actions in context. But the American library on the subject is vast- and illuminative. It turns on the notion that criticizing the ruling class is an important part of the Democratic process, and that the ruling powers are prohibited from stopping it. We’re talking about encouraging negative comments- even if vicious. The liberty of free speech grew up with the notion that “the Court[s} came to understand that the First Amendment forbids government officials from suppressing particular ideas because they don’t want citizens to accept those ideas in the political process.”[3]  This is precisely the rubric trampled on by Netanyahu and his enablers. They screech that the courts should not topple a prime minister who was duly elected by the populace, when this same populace was manipulated into voting for this prime minister by the very press he ostensibly is controlling. What we are quibbling over here, is the minutiae of the specifics of that control.

Indeed as constitutional scholar Vincent Blasi notes, citing the eminent jurist Learned Hand, there is incident to a political system that fosters democracy a basic, almost sacred principle of permitting “hostile criticism,”[4] against the ruling class, such that hostile speech is allowed, nay, it is protected — even if it might cause harm.

A quote from free-speech champion Justice Louis Brandeis is spine-tingling, given the nooses tightening about our free-speech necks:

“Those who won our independence by revolution were not cowards. They did not fear political change. They did not exalt order at the cost of liberty.”[5]

By this admonition, the descendants of our War of Independence, are, by implication, rank, quivering, pee-in-your pants cowards. They do fear political change, and rabidly so. Either that, or they are enslaved by the salaries and perks of office such that they are willing to unabashedly snatch from the governed the fruits of liberty. Deprivation of that liberty — to have access to an unfettered press — is now being abetted by the Courts who seem to be willing to entertain such conduct by imposing on the Attorney General the obscene requirements of detailed particularization.

It shouldn’t be necessary. The mere thought of those in power trampling on the spreadsheets of hostile political criticism should be sufficient to make our legal guardians puke. Instead, they ask for precise details. Have we no shame?

1] Per the Midrash  geneivat da’at is the worst type because it directly harms the person, not merely their money  See Mekhilta Mishpatim 13, Tosefta BK 7, Hilchot De’ot 2:6.