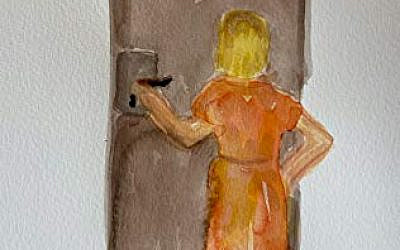 Yes, it’s here at last! My latest book (my seventh), ‘Friends, Neighbors, Traitors,’ is now available as an ebook for a mere $2.99 on Amazon. If you find the price a bit too steep for you, you can always wait for 10th May, when it can be downloaded for free. I am currently in the process of preparing the paperback version of the book, which I hope will also be available on Amazon very soon.

The story is set in a Jerusalem neighborhood in 1983. Israeli troops are mired in fighting in Lebanon in an attempt to uproot terrorist groups there. Although Jerusalem is not affected directly by the combat, one of the consequences of the situation is a fall in tourism, with consequent damage to the economy.

The book has four main protagonists, three women and one man. Helena, who is a stay-at-home mother, is bringing up her two young sons, together with her husband, Aaron. Originally from England, Helena finds herself constantly struggling to cope with the realities of daily life in Israel, and the demands of her husband and children.

Helena’s friend, Anna, an artist who hails from Denmark, is battling to remain solvent as she tries to care for Shira, her five-year-old daughter. Anna is divorced, but her ex-husband uses every opportunity to insult and abuse her whenever he comes to take Shira for her weekly visit. In addition, he has been trying to gain custody of Shira through the courts, causing Anna constant anguish and fear. Anna and Helena are friends, but Anna is secretly having an affair with Helena’s husband, Aaron.

Naomi was born in Germany before the war, and came to Israel as a child with her parents. She lives on her own, works as a translator, and is doing her best to come to terms with the dense philosophical tract she has undertaken to translate. She suffers from bouts of depression associated with her grief over the death of her mother. She and Helena meet by chance and strike up a friendship. Helena introduces Naomi to Anna, and they soon become fast friends too

The changing light and atmosphere of the city of Jerusalem also play a role in the development of events, some of them trivial, others dramatic. Essentially, the book is about life as a woman and an outsider, the difficulty of coping with the realities of daily existence, and the demands society puts on us to carry on with some semblance of normalcy. This applies both to parents bringing up young children, and (or perhaps even especially) to someone who is childless. The narrative switches between the three main protagonists as they find their attachment to reality threatened, doing what they can to deal with it.

The book ends with Aaron, who is surprised to find that matters are not going quite the way he thought they would.

Buy or download my book, and I will be very grateful to you. If you can bring yourself to write a review of it you will be doing a good deed and giving a struggling writer a helping hand.