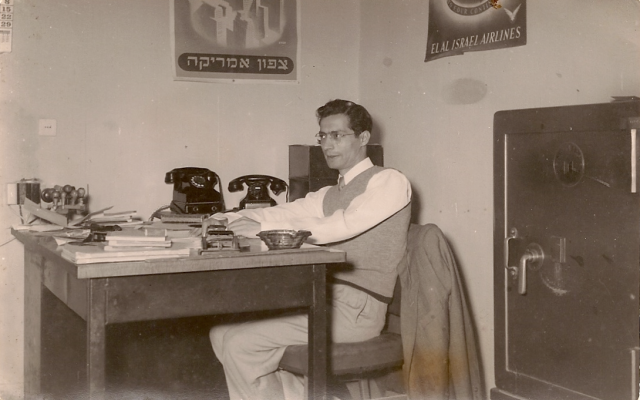 Modern Israeli history, barely a century old, is lined with more drama and suspense than most countries will ever experience. The twentieth century witnessed a biblical re-enactment unfold before its very eyes as the Jewish people once again were brought from slavery to freedom in Eretz Israel.

The shadows of the Torah loomed large from the Book of Exodus as the ingathering of Jews streamed from every corner of pogrom-stained Europe and the Arab expulsion. The symbolism was most striking from the Jews escaping Egypt, just as Moses before them, fleeing the persecution they suffered under a king named Farouk, which sounded a little too much like a king named Pharaoh.

For one Egyptian Jew, the founding of the State of Israel also foreshadowed a very different Exodus – the Hollywood kind – as he became an eyewitness to the first chapter of Israeli cultural history, exchanging his walk-on part in the war for a lead role in exporting Israel’s first international superstar.

Joshua Malka was a 28-year old hotelier when he fled Alexandria in 1948. One of seven children, “Shua,” as he was known in Hebrew, settled north of the border in the nascent Jewish state whose declaration of independence was as miraculous in timing as it was convenient in location.

Shua and his three brothers immediately joined the infant IDF to defend their new home against their old one in the War of Independence. Though they prevailed, victorious and free, Israel in its founding days was still a dirt-poor, third-world nation living on food rations. The government was trying to handle the influx of Jews overwhelming its scarce resources as they arrived from fourth-world nations where dirt was a commodity.

Having been trained in hotel management and certified at Egypt’s famed Luxor Hotel, Shua brought badly needed experience in elite hospitality, as rare a commodity in those days as anyone can imagine.

The Jews of modern Egypt were typically cut from upper crust cloth. They spoke Arabic at home, learned academics in French and prayed daily in Hebrew at the orthodox synagogue. Shua’s religiously refined etiquette had an international flavor gained from years working at the Luxor serving luminaries as large as King Farouk himself. 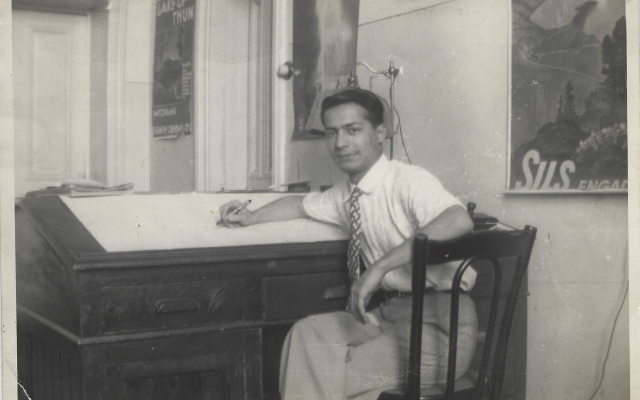 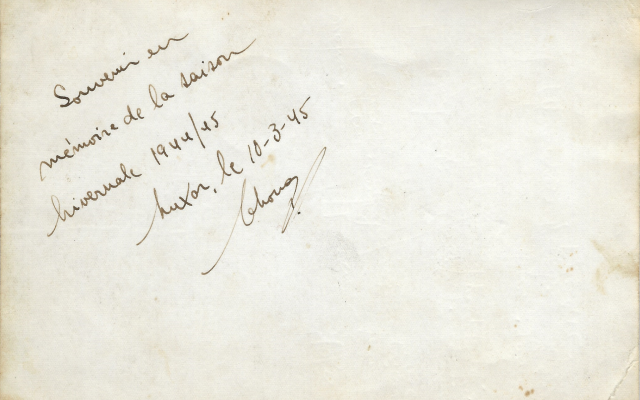 The inscription on the backside of the picture above. 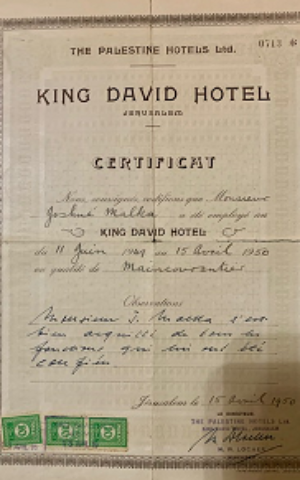 Certificate of employment from the King David Hotel, received by Joshua Malka after he resigned.

From King David to King Joshua

Shua took everything he learned at the King David attending to VIPs at the highest level and applied it to managing Beit Dolphin (Hebrew link), a high-end seaside resort in Shavei Zion. It was the first boutique hotel in the entire country, freshly renovated by South African film producer Norman Lurie – the namesake for Tel Aviv’s current renowned Norman Hotel – who Shua would later join as a full partner in ownership. 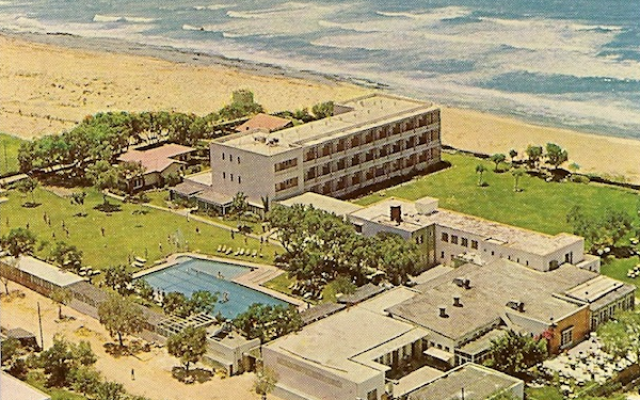 Both men basked in the pleasure of running the only luxury resort of its kind in all of Israel, though it was Shua who took care of the day-to-day operations hosting world leaders, dignitaries, businessmen and celebrities. 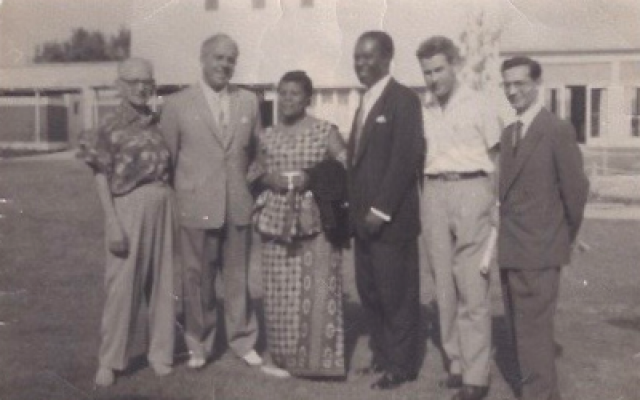 Joshua Malka (right) hosting the Prime Minister of Ghana, the first African country to have diplomatic relations with the State of Israel. 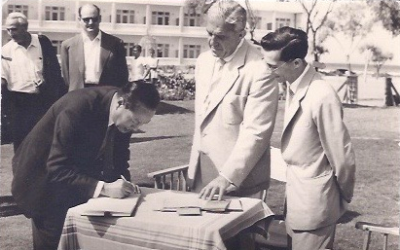 Joshua Malka (right) watches as the Prime Minister of Burma, one of the first countries in Asia to recognize Israel, signs the guest book at Beit Dolphin / בית דולפין / Dolphin House.

Shua and his wife, Eva, a Holocaust survivor from Czechoslovakia, were living like kings and queens in an age and a country where most of the people were living on hummus and oranges. They built a dream home on the moshav overlooking the water, which still stands today in its original structure, owned by the same family they sold it to decades ago.

As the rest of the country went through its growing pains, Shua and Eva, or “Chava” as she was more commonly known in Hebrew, took their young daughter out of school for two months each year to holiday in Switzerland, France, England, Monaco – wherever their hearts desired that winter.

Chava strolled the shops for the latest in high fashion while Shua scouted the clubs for talent to bring back to the hotel for the upcoming summer season. Today they’d be an example of the widening gap between rich and poor, but after everything they’d been through in their journey to paradise, they weren’t about to deny themselves the fruits of their labor.

The reversal of fortune for both was quite astounding, but for Chava especially. A decade after starving for three years in the alleys of Auschwitz, she was now eating the finest delicacies all over Europe and living in a waterfront villa on the shores of the Mediterranean, filled with exquisite furniture from all around the globe.

On more than one occasion she even took a helicopter from Shavei Zion to Tel Aviv, a 2-hour car drive, just to go clothes shopping. Once she became a Malka – “Queen” in Hebrew – Chava happily lived up to the name. 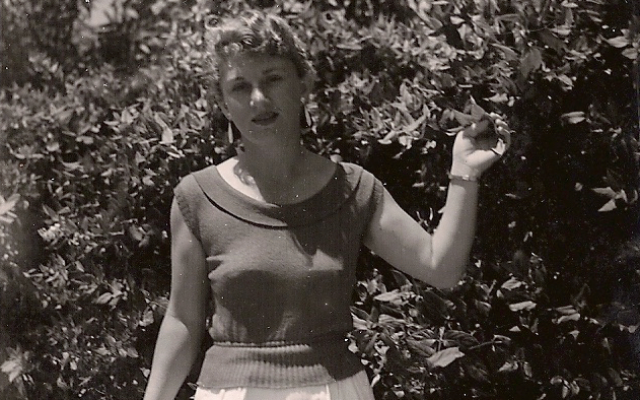 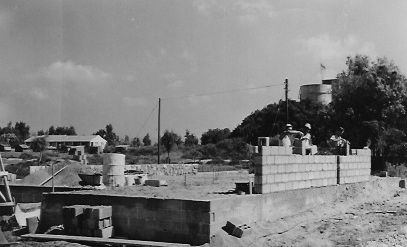 The Malka house under construction. 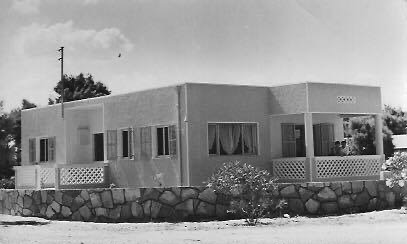 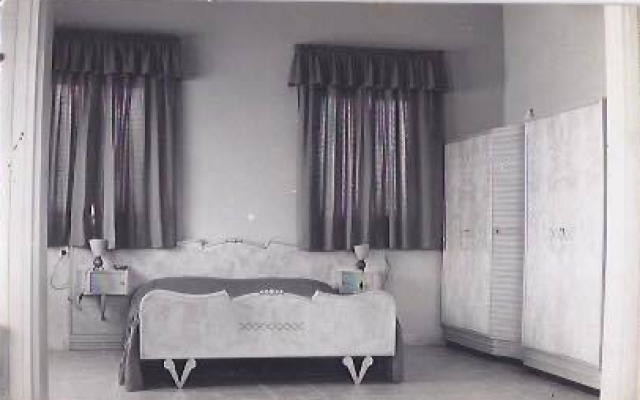 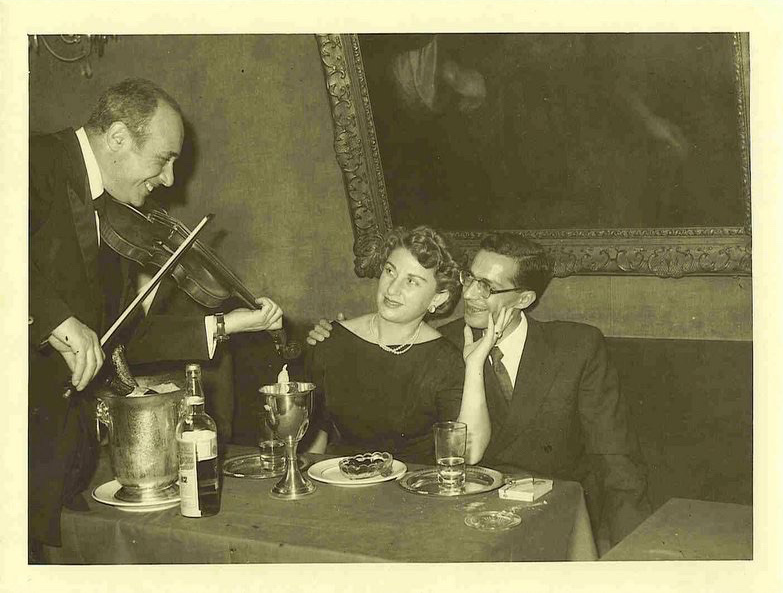 Joshua and Eva Malka being serenaded in a Paris club.

Paradise by the boardwalk light

How exactly did Chava get a private helicopter in 1950s Israel? From the legendary guests who stayed at the hotel. 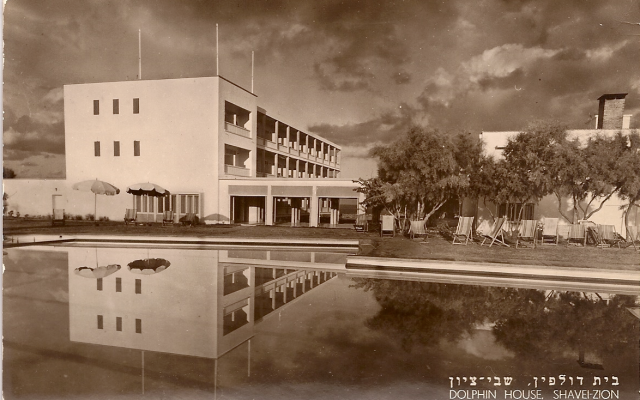 Beit Dolphin wasn’t just any old seaside resort – it was where royalty and diplomats mingled with rich and famous movies stars, all living the high life under Shua Malka’s hospitality. If a guest had a ‘copter sitting around idling, they let Chava take it for a spin while they took in the rays poolside. 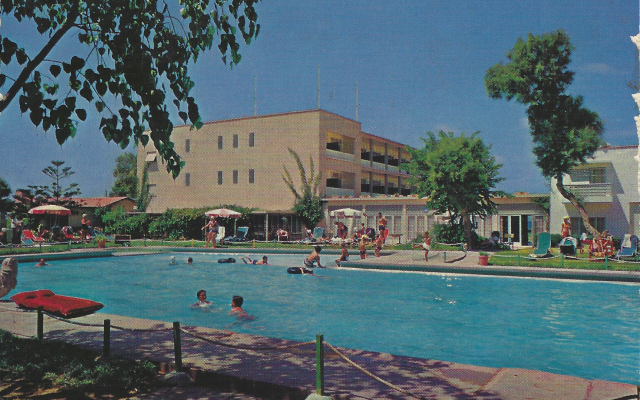 Shavei Zion was (and still is) considered a “rich” moshav by most Israeli standards. The houses are on par with American upper-class suburbia, some fancier than others, but still a quintessential Israeli community of halutzim (pioneers). They grew oranges and picked dates, ran from sirens into bunkers, sang with joy and danced with fervor at every occasion.

Yet the presence of Beit Dolphin added a supremely unique dimension to their simple way of life – an air of sophistication left by its exquisite lineup of visitors relaxing and reveling in the nightly celebrations. The voices of French singers filled the salty air as the guests mixed with the locals, partying the night away to the beat of the Mediterranean’s cascading tide. 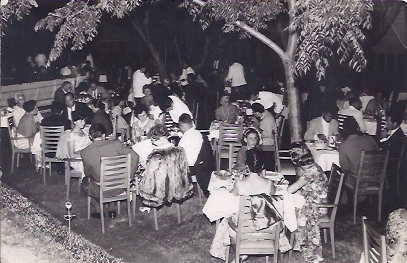 In 1950s Israel, anybody who was somebody stayed at one of two places when vacationing in the holy land:

Beit Dolphin was an address for icons from the Golden Age of Hollywood like Paul Newman, Danny Kaye and Sophia Lauren. All the world’s elite recharged their batteries at the A-list hideaway, notes Eretz Magazine:

There wasn’t a president, king, movie star, or famous businessman that didn’t stay at the Dolphin House.

The scenery was unbeatable and the service was impeccable, as evidenced by the picture Paul Newman gave Shua after his stay. 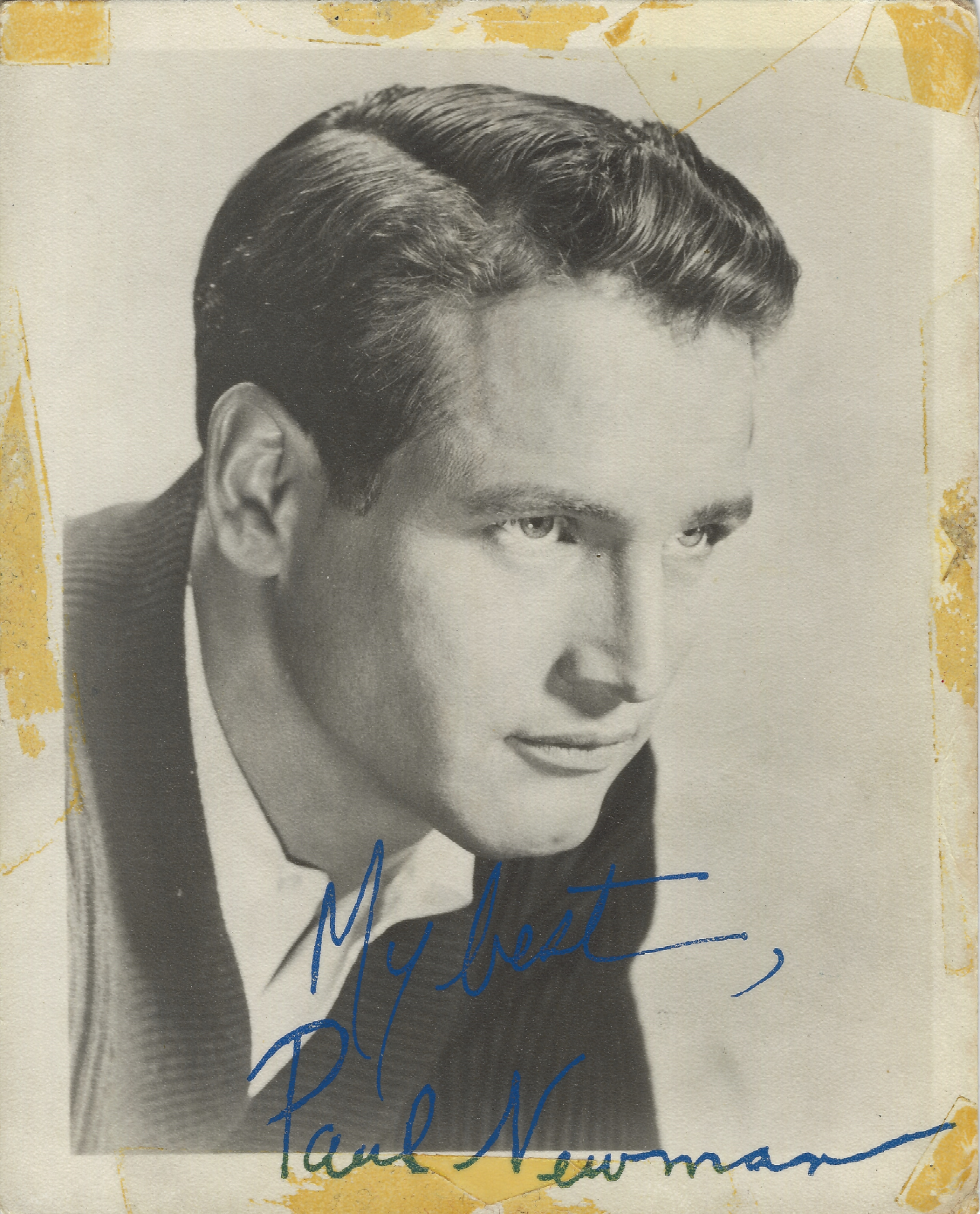 Picture given by Paul Newman to Joshua Malka after staying at Beit Dolphin while filming Exodus.

Notorious for not being autograph-friendly, he signed it – unprompted – as a token of his appreciation for the care he and the cast received while shooting the now legendary film adaptation of Leon Uris’ Exodus – who also stayed at the hotel while writing much of his seminal book.

However the title of “most loved guest” at Beit Dolphin went to the recently departed icon Kirk Douglas. He visited while filming “The Juggler,” his first feature in Israel, though he did more than just visit – he discovered Israel’s first superstar – thanks to the help of Shua Malka.

Shua’s role in the community was informal but giant – everyone knew the Malkas. They had things no one else had, like their own private telephone line (which everyone used anyway). Their daughter played with European dolls nowhere to be found in the toy stores of Israel. 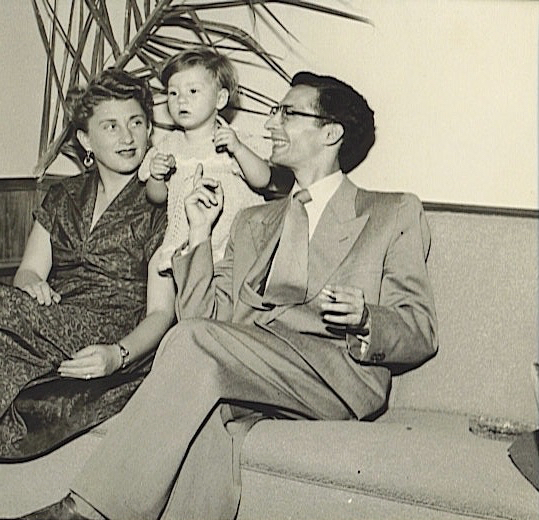 Shua walked back and forth from the villa to the hotel, managing the lifestyles of the rich and famous while Chava managed the household. They were one of the few families who weren’t financially tied to the agricultural moshav because Shua’s gig was running the hotel – a contribution far greater than anything he could offer in farming. 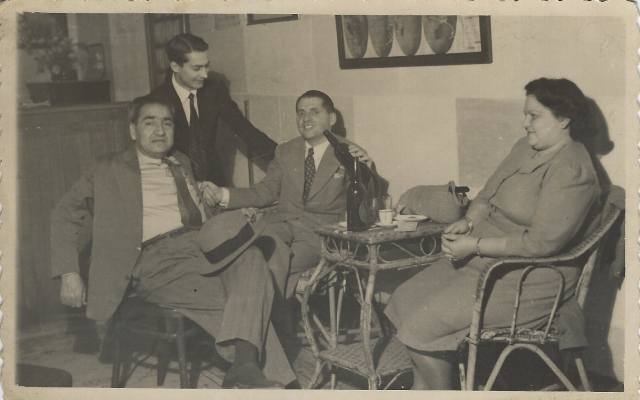 Though living large, Shua always helped others however he could, using his many connections as a master of protektzia. He even tried to get the infamous gangster, Meyer Lansky, residency in the country when he was seeking to escape prosecution in the US. (They were both casino men with friends in high places who believed in the maxim “leave no Jew behind.”)

Someone he had more success in helping break out was the 10-year old girl who babysat Shua’s daughter – Daliah Lavi ז”ל – Israel’s first “Gal Gadot.”

Daliah Lavi is the most famous product to ever come out of Shavei Zion – a stunningly beautiful cultural export who won hearts and minds all over the world. She starred in films with the biggest names in Hollywood from Peter O’ Toole and Woody Allen to Peter Sellers and Orsen Welles.

As noted in her obituary, Daliah got her big break when she was introduced to Kirk Douglas during his stay at Beit Dolphin – though they fail to mention it was Shua who made the shidduch (match). After the initial meeting, he helped Daliah get to Paris where she was mentored by Douglas who kickstarted her career.

Lavi would go on to win a Golden Globe award in 1962 for most promising female newcomer, though it was her role as a secret agent in the James Bond spoof Casino Royale which cemented her place in cinematic history. In the 1970s, she parlayed her acting career into a singing one, building even further on her legacy in the pantheon of Israeli cultural history.

For Israelis of the founding generation, Daliah Lavi was as legendary as it gets – and it all started way back at Beit Dolphin in Shavei Zion.

The reason I know these random details of 1950s Israeli cultural trivia is because my mother was the little girl who Daliah Lavi babysat on the moshav. Shua Malka was my saba (grandfather) and February 9th, 2020 would’ve been his 100th birthday. He passed away in 2005 at the age of 85 – but what he did with those years could fill a lifetime of Zionism. 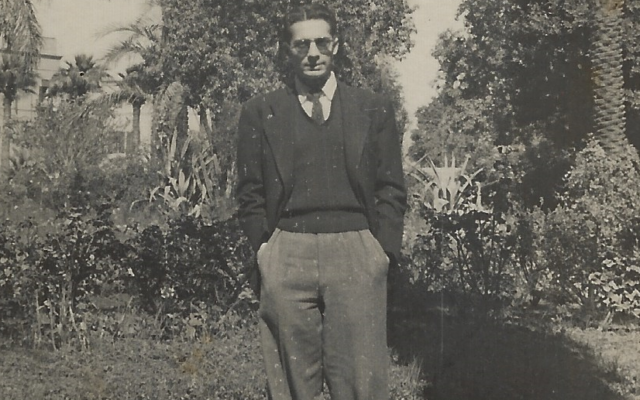 Joshua Malka on the lawn of Beit Dolphin / בית דלפון / Dolphin House Hotel and Country Club
Shavei Zion, Israel, late-1950s.
About the Author
Yoni Leviatan is a British-born, American-raised, Israeli-blooded musician, content producer, brand strategist, presenter and political commentator who loves to think out loud. Especially about Israel. Originally from Coral Springs, Florida, Yoni has been living in Tel Aviv since 2009, returning to the land of his parents and grandparents and ancestors before them. Click to watch his videos. Click to hear his music.
Related Topics
Related Posts
Comments