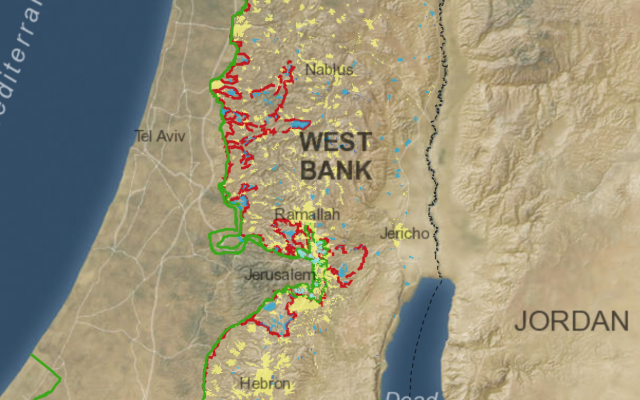 Illustrative: A new interactive map developed by the Washington Institute for Near East Policy for its website Settlements and Solutions that is designed to allow users to assess the current viability of a two-state solution. (Screen Capture)

For more than 200 years, the Jewish people was forced to function without a shared religion, for Judaism, more than serving to unite us, was that which divided us. Despite that, combating anti-Semitism and building and supporting the State of Israel helped us overcome these schisms and sustain our collective identity.

Mirroring world trends, today, politics has replaced religion as the primary bifurcating force in Jewish life, whether in Israel, about Israel, or in North America. Political difference is not new; what is new, is the way political positions serve as the primary factor in shaping identity. What is new, is the toxicity of the discourse, and the viewing of political “others” as beyond the pale.

The dangerous consequence of this reality is deep divisiveness and acrimony within Israeli society and the increased association of the pro-Israel camp in North America with one political perspective, and not as a bipartisan value, as we need it to be.

A principal factor in this reality is the political debate about the “Occupation,” or whether there is an occupation at all. In Israel, the widespread belief is that Palestinian leadership and society are not reliable partners for peace. The majority of Israelis do not believe that the occupation has persisted as a result of Israel’s policies, but rather due to the fundamental refusal of Palestinians to accept Israel’s right to exist. Even those within the “peace camp,” who advocate for a two-state solution, base their positions on the existential need of Israel to maintain a Jewish majority and not on a counter-argument regarding Palestinians’ willingness to embrace peace.

In this political worldview, the occupation is converted into basically the new status quo. Amid a dysfunctional Middle East, the ongoing conflict with the Palestinians is unresolvable, and perceived as mild in comparison to the destiny of most. This reality is simply our fate, and our survival is dependent on making peace with it.

A significant minority of Israelis and the vast majority of North American Jews disagree vociferously. They do not view the consequences of the occupation as “mild,” or sustainable. The fact that Syrians have it worse is not a cause for comfort, for we are responsible for that which happens under our domain. They believe that while Israel is not solely at fault, as the most powerful nation in the Middle East, it has the ability and consequently the responsibility, to alter the status quo.

One side believes that peace, or at the very least separation, is possible if we would just pursue them with appropriate policies and commitment. The other side believes that under the current conditions, neither peace nor separation are attainable, and as a society we must accept our fate and adjust our policies accordingly. This is the current status quo within the Jewish community, and as with most political debates, there are no facts or counter-arguments which will sway one side to the other.

As is the case with most status quos, the reality surrounding them rarely remains the same. The status quo within the Jewish community is deepening mutual alienation and alienation from Israel. If we cannot unite around politics, is there somewhere else that we can find a common ground?

One of the central lessons of our tradition, a lesson that transcends denominational and political divides, is that Judaism is not exhausted by the desire to survive. The Exodus from Egypt was never about our physical liberation alone. “You have seen…how I bore you on eagles’ wings…Now if you will obey me…you shall be to Me a kingdom of priests and a holy nation.” (Exodus 19) The Jewish people were not defined by the pursuit of freedom, but the pursuit of purpose.

We must come to terms with the fact that good people, intelligent people, moral people, can differ regarding the question of whether the Palestinians want peace, and whether a two-state solution is politically viable. The criminalization of each other as either nationalist-fascists, or self-destructive and self-hating Jews, needs to come to an end. While providing a satisfying dose of self-righteousness, it is creating profound harm for our people and Israel. They mean well and are good people, but to quote Mark Twain, “in the worst sense of the word.”

This lunacy must come to an end. If all human life is created in the image of God, then not only does Jewish life count, but so too must Palestinian. We must stop politicizing our moral discourse, and we need a healthy bipartisan debate as to how best to implement our moral commitments within our current political reality.

Jewish politics must be concerned with our survival, but also with our moral purpose. We need to not merely recognize this truth but discuss it and implement it within our political discourse and policies. If we do not engage in moral discourse, we will find our political selves and platforms distanced and alienated from it. For 200 years, Judaism divided us more than it united us. We now need Jewish moral values to help heal our divides and unite us under a common purpose. We may disagree on the facts, but we need not disagree on our purpose.