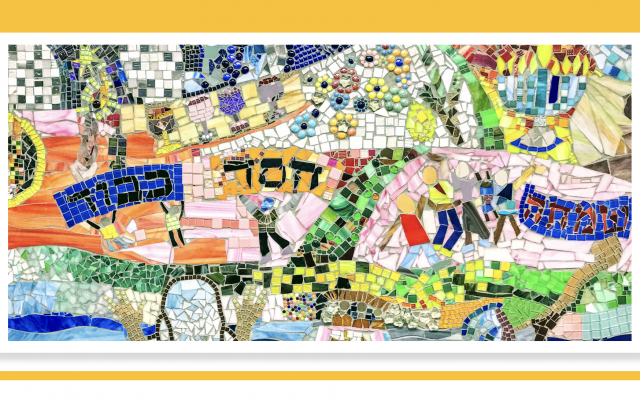 Ken Spiro has a wonderful and compelling book, WorldPerfect (not to be confused with the old word processor, WordPerfect), where he craftily explains how civilizations’ notion of a perfect world comes not from classical Greek and Roman society — where art, architecture, beauty, government, philosophy, and empirical science emanated — but rather directly through Judaism (i.e., from Hashem).

Surveying 1,500 people, mainly from Western civilization, Spiro identifies six categories that make a perfect world and then explains their derivations from G-d’s teachings to the Jewish people.

Spiro clearly describes Greece and Rome as a regular “horror show,” with routine killings for infanticide, human sacrifice, and sport (e.g., gladiators and the Coliseum) and as endemic to these cultures’ low regard for human life. In contrast, we learn from the very beginning in Genesis that people are created in the holy image of G-d, that there is boundless sanctity and value to human life, and this is summed up by the Jewish dictum of “He who saves a life, saves the world.”

2. Co-existence in Peace and Harmony

In Greek and Roman times, war was considered glorious, along with killing for conquest and the ill-gotten gains of the spoils of war. In short, it was the law of the jungle, where “might makes right” and only the strong survive. How different is the teaching of Judaism, where our very greeting and salutation is “Shalom” (peace), our foundational principles include a longing for messianic times that will bring eternal peace, brotherhood, unity, and harmony, and where our prophets envisioned, “They shall beat their swords into plowshares.”

3. Equality and Justice for All

Greece and Rome were aristocracies, with emperors being deified and the nobility ruling. Democracy in Greece was of the most limited variety, where only a small minority (adult males who owned land, and both parents were Athenians) could vote. Human rights and freedom were the landowners’ affair, while artisans, laborers, and tradesmen were downtrodden, and slavery was grotesquely rampant. This is in contrast to the Torah, given 3,300 years ago, which has “justice” spelled out for us 120 times, and with fairness required regardless of gender or social, economic, or political status. No wonder, from Judaism comes “Justice, justice shalt thou pursue.”

Education and literacy in Greece and Rome were reserved for the intellectual elite. Schools were something for the children of the ruling minority. In short, to keep the poor underclass under control, it was deemed that “Ignorance is bliss.” Yet, in Judaism, our belief system is the direct opposite, with education considered a top priority and Torah study a lifetime religious duty. For millennia, the Jews have been known as “The People of the Book.”

Athens and Rome, with their orgies, fertility rites, and nudity in the Olympics, were anchored in their reverence for bodily perfection as well as unbridled promiscuity at large. Fidelity was considered a necessity only for a clear line of succession; women were seen as simply inferior, “to be neither seen nor heard,” and sex between men and boys was viewed as the highest form of love. Yet, on the completely other end of the spectrum, we have Judaism that teaches the critical roles of modesty, intimacy, and the sanctity of marriage. Already from Genesis, we learn that man and woman are two halves of a whole. In Judaism, women have the legal right to be loved and are highly respected and valued. The Talmud summarizes, “love your wife as you love yourself and honor her more.”

Kindness was not considered a social responsibility in Greece and Rome; pity was viewed as a weakness, and charity as a means to control the masses from revolting. The Greek philosopher Plutarch captured this attitude by saying, “But if I give to you, you would proceed to beg all the more.” How morally and socially refreshing is Judaism, where “Tzedakah” (charity) is a legal obligation, with the Torah requiring tithing or the donation of a tenth to charity. Moreover, the various commandments of the Torah clearly lay out the social responsibility to do good, and moreover, to prevent harm to people, animals, and even the environment. In Leviticus, we are told: “You shall love your neighbor as yourself.”

In short, Spiro clearly contrasts Greek and Roman Hellenistic culture with Judaism. One one hand, you have Greece and Rome with polytheism and paganism, where gods are in the image of man, beauty is holy, and morality is subjective and malleable. On the other hand, we have Judaism’s clear declaration of monotheism (with one omnipotent, benevolent, eternal, and invisible G-d), where man was created in the image of G-d, the holy is beautiful, and morality is objective and unchangeable. At the end of the day, there is no contest: G-d’s Torah, as transmitted through the Jewish people, is the absolute and enduring “light unto the nations” towards the perfect world.