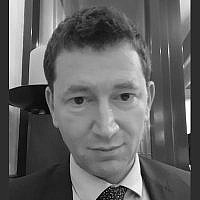 The Blogs
Ilan Cohn
Apply for a Blog
Please note that the posts on The Blogs are contributed by third parties. The opinions, facts and any media content in them are presented solely by the authors, and neither The Times of Israel nor its partners assume any responsibility for them. Please contact us in case of abuse. In case of abuse,
Report this post. 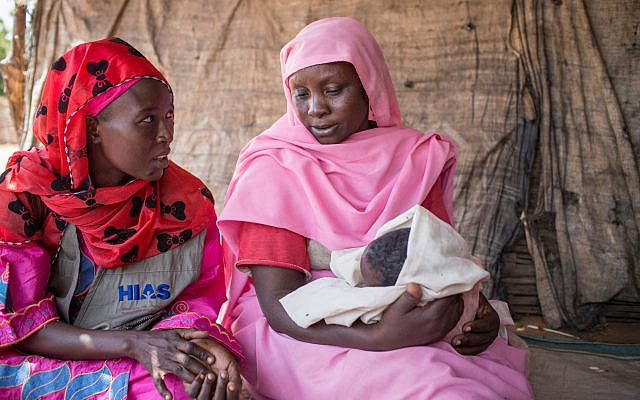 Chad: A community mobilizer meets with Amneh Yakum Abbakah, 40, who learned to make baskets through HIAS activities and now runs her own shop with the income she generated from selling them (Credits: Glenna Gordon)

Igor Chubaryov’s grandparents fled from pogroms. His parents left Ukraine with other Jews after the Nazis attacked. When he was 24 years old, he escaped Russian persecution and resettled in New York. Now Chubaryov helps fellow refugees as a New York-based program manager for HIAS.

Churbaryov and Lustgarten are motivated by their Jewish identity and family histories to help others. The same is true of many of their colleagues at HIAS, the global Jewish nonprofit that helps refugees, asylum seekers, and other vulnerable people. Our organization was founded in 1881 to assist Jews fleeing pogroms in Russia and Eastern Europe. We continue to help Jews in distress – my colleagues in Venezuela provide humanitarian aid to Jewish communities at imminent risk of displacement. Yet today, few Jews are refugees. HIAS’s 80 field offices and more than 1,000 staff members from Chad to Columbia to Ukraine focus on aiding non-Jewish refugees.

In most of Europe, Christian organizations such as Caritas and World Vision have long been on the humanitarian front lines. ECHO, the European humanitarian agency, partners with some 45 Christian and five Muslim non-governmental groups – yet not a single Jewish organization. Our Jewish history and values give us a responsibility to join them.

The need to help refugees is more urgent than ever. At the end of 2019, almost 80 million people around the world were forcibly displaced, the highest number on record. Contrary to popular misconception, the vast majority are not housed in Europe or the West. Developing countries, led by Jordan and Turkey, host 95 percent.

COVID-19 threatens to turn this simmering refugee crisis into a full-fledged humanitarian disaster. Before the pandemic, many refugees struggled to earn enough to support their families. Now jobs have dried up. More than 70 percent of those receiving aid from HIAS can no longer meet their basic need for food, compared to only 15 percent before the outbreak.

In many countries, HIAS assistance is a lifeline. We are partnering with local supermarkets in Ecuador to help asylum seekers buy food with credit. In Israel, we have formed a volunteer network to deliver food. In Kenya’s cities, we have found ways to deliver our services online, including one-on-one mental-health counseling.

We are also fighting COVID-19 itself. In Chad’s refugee camps, for example, we have built hand-washing stations, handed out masks, and provided information about how the virus spreads.

Amid the pandemic’s dark clouds, some heartwarming moments shine through. Many come from refugees who, having found refuge themselves, are giving back. Bhagawat used his business skills to get masks and other protective gear to people in the Washington, D.C. area. Zacha cooks meals for refugees in Peru. Take a look at this video and listen to their stories.

What can you do to help them?

Donate. More than 100 Jewish and Israeli organizations recently held a 10-day campaign to raise funds and express solidarity for refugees. Funds are needed more than ever, not just because of growing need but also because many philanthropists are cutting back or reprioritizing toward domestic and COVID-19 needs.

Educate. HIAS has developed numerous resources, often connected to Jewish holidays, that will help connect refugee issues to your local communities. Most recently, HIAS Europe translated the HIAS Haggadah into French, and it stands ready to support local initiatives throughout Europe with tailored resources.

Advocate. Governments need to know that we care about refugees. The European Commission is preparing to launch a new Pact on Migration and Asylum, which will include construction of new asylum centers on European borders. Those centers must be used to accelerate legitimate asylum requests, not simply speed up rejections.

Our community’s voice in Brussels should go beyond fighting anti-Semitism and supporting Israel. We should advocate, along with other faith communities, for the European Union to find solutions for refugees and their impoverished host countries. While control of external borders is important, it alone will not solve the problem of forced migration.

Like my colleague Igor Chubaryov, Jews must not forget that we too often have been refugees. “HIAS helped in the beginning because the needy were Jewish,” says Chubaryov. “And now HIAS continues to serve because that’s what Jewish people do — we help.”

About the Author
Ilan Cohn is based in Brussels and is the Director of HIAS Europe. For the past two decades he worked on migration at the international level through a number of intergovernmental organizations, as well as through JDC and the Center for International Migration and Integration in Israel.
Related Topics
Related Posts
Comments