When we read the story of the parting of the Red Sea over Passover last week, I was struck once again by the courage, faith, and leadership of Nachshon ben Aminadav.

When the children of Israel appear seemingly trapped by the sea on one side and Pharaoh’s pursuing army on the other, they are overcome with desperation and fear. While Moshe prayed to God for help, the leaders of the tribes were caught up debating and deliberating over possible actions to take. When everyone hesitated, one leader – a prince from the tribe of Judah, Nachshon ben Aminadav – took a heroic leap of faith into the raging sea.

Nachshon intuitively knew what was required of the leader at that moment. He took the necessary action by jumping into the sea, and thereby, moved the Israelites forward on their communal journey.

For the past two months, all of us have been following the inspiring story of our “modern day Nachshons” – high school students turned young activists, survivors of the horrific shooting in Parkland, Florida. The “March for Our Lives” in Washington attracted more than 800,000 participants, one of the largest single-day protests in history, and was supported by hundreds of sister marches in cities all across the country. 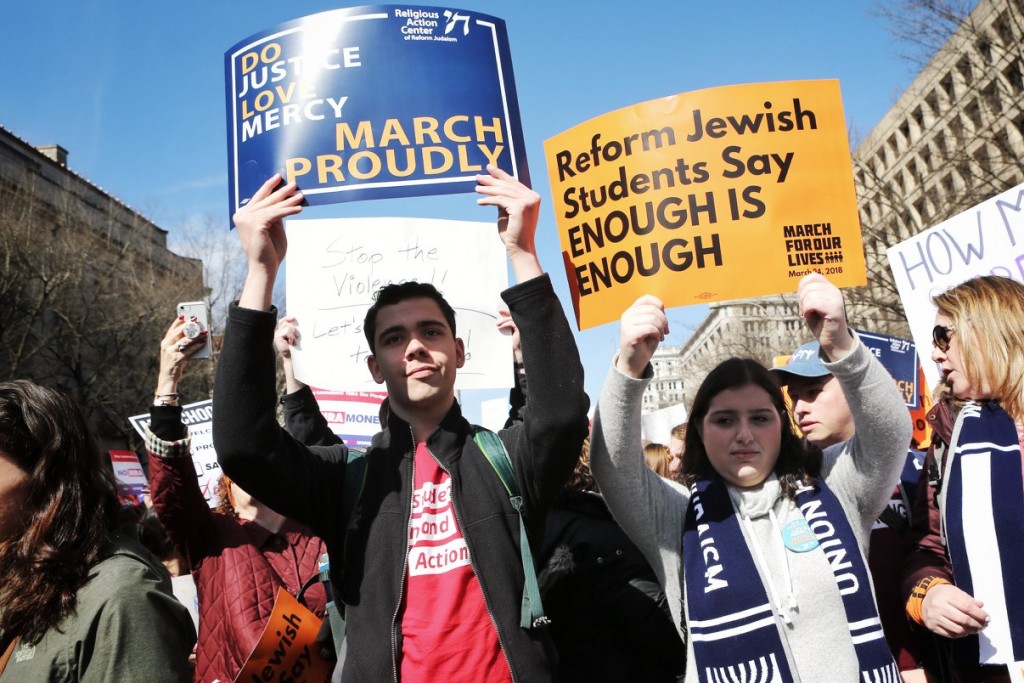 (Hector Emanuel for the Religious Action Center of Reform Judaism)

Many of these teenage leaders said that their camp experiences empowered and inspired their activism.

Carly Novell, a student and camper who survived the shooting, expressed her resolve and fortitude to move forward – lessons she learned from Jewish camp. “One person can speak for the voices of thousands, and one person’s life can impact another person’s life immensely.  It was our duty to make sure that this wouldn’t happen to anyone else.” She continued, “My trauma created an opportunity to help others to help themselves. At camp, I learned that to repair our world, we need to be the ones to take action. The time for change is now, and we need to be the ones to make that change.”

Directors of Jewish camps poignantly described to me how they intentionally teach campers to ask questions, to discover themselves – their true and best selves – to think more deeply about the world in which they live, and to consider how they can make a difference. Recently, Bobby Harris, Director of URJ Camp Coleman in Georgia, reflected on the movement which has formed since the Stoneman-Douglas shooting, saying, “At Jewish camp, we recognize that we create special, joyful, and meaningful experiences. I am not so sure that there was ever a moment that I realized the extraordinary impact of what we do.”

In the face of this tragedy, we can all be proud of the lessons learned at camp and their impact far beyond the summer. Much of our work at Foundation for Jewish Camp focuses on leadership development at all levels, helping camps develop an aspirational arc for intentional Jewish growth and impact. We remain even more committed to these efforts with a new strategic vision to engage and empower teen campers to see themselves as leaders and Jewish role models – during summertime, year-round, and life-long.

What has transpired since the shooting in Parkland has been catalytic for teens across the nation. While my memories of the late 1960s are faint, many of my colleagues have compared these times to the Vietnam War protests, with young people stepping up and making their voices heard in compelling ways.

The gatherings and activism reminded me of my own participation in the March on Washington for Soviet Jewry in 1987 in which our Jewish community stood united. We can only hope that the call to action today will be as fruitful and successful as was that effort almost 31 years ago.

What makes this different from those two examples is that the teens are leading this movement. This is why we must continue to invest in their development and growth and support their call to action.

Since taking those first steps into the Red Sea, Nachshon has become synonymous with courage and the willingness to do the right thing, despite insurmountable obstacles and uncertain outcomes. So, too, I hope the actions of our teens in the last two months will forever be examples for us all in taking the lead to create a safer, better world.

About the Author
Jeremy J. Fingerman has served as CEO of Foundation for Jewish Camp (FJC) since 2010. Prior to joining FJC, he had a highly-regarded 20+ year career in Consumer Packaged Goods, beginning at General Mills, Inc, then at Campbell Soup Company, where he served as president of its largest division, US Soup. In 2005, he was recruited to serve as CEO of Manischewitz.
Related Topics
Related Posts
Jeremy J. Fingerman
Comments