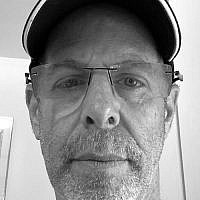 The Blogs
Danny Gewirtz
Apply for a Blog
Advertisement
Please note that the posts on The Blogs are contributed by third parties. The opinions, facts and any media content in them are presented solely by the authors, and neither The Times of Israel nor its partners assume any responsibility for them. Please contact us in case of abuse. In case of abuse,
Report this post.

Throughout the Corona crisis we’ve all been looking for a hero.  Someone or something that can give us hope, give us pride, give us someone to root for.  On the surface of it, things have been so bleak and demoralizing that there really haven’t been many worthy candidates.  Certainly nobody from either the government or the Health Ministry have emerged as possible heroes.  Several Israeli bio-tech companies have been at the forefront of a vaccine breakthrough but the elusive and invaluable elixir for Corona has yet to be discovered.  A British company called Diagnostics.ai whose R&D team is entirely based in Herzliya, is already providing labs in the UK and the US with their advance diagnostic technique for the Corona virus by employing artificial intelligence, but how can an R&D team be heroes unless they came up with a cure for this virulent virus and not just for more efficient diagnostic testing.  I’m not belittling or minimizing R&D teams but they don’t exactly qualify as heroic figures.  Basically the news has been so bad for so long that the word hero has slipped from our lexicon when it comes to COVID-19.

But very few events like the one we are experience advance too long without a bonafide hero emerging right before our very eyes.  Clearly with the PR winds at their back and dressed like a knight in shining white armor, our National Carrier EL AL has become our collective national hero and an abundant source of national pride.

It’s hard to come up with a company or service that has been hit financially harder than EL AL, unless of course you are in the home security business.   After cancellations of hundreds of flights and a massive reduction of its flights schedule, EL AL has had to place 80% of its employees, including 90% of the pilots, on unpaid leave. Reports are they have lost 180 million shekels and that number is expected to rise sharply before this is all over.  And if that wasn’t enough, Hundreds of EL AL employees (mostly flight attendants) are in isolation because of possible exposure to the coronavirus and the health ministry’s directive to self isolate upon returning from abroad. But like the Mythological Greek bird Phoenix, that obtains a new life by arising from the ashes, EL AL is emerging from this catastrophe not financially stronger but solidly ingrained as a savior and morale booster.

Like everyone, I have been glued to the nightly news and every evening nestled in among the depressing health ministry reports, economic hardships and new closure restrictions, are reports of EL AL flying to different areas of the world rescuing stranded backpackers and other Israelis who found themselves with fewer options as the days pass to get home and to get home safely.  At the request of the Israeli government, EL AL has been sending empty airplanes to Brazil, Colombia, Argentina, Australia, Costa Rica, India and last but not least Peru.  The effort to repatriate 1,100 backpackers in Peru especially caught my attention.  Most, if not all, of the backpackers did not have any financial resources to pay for these special flights and government resources have been stretched razor thin, so EL AL’s owners embarked on a “fundraising” mission and approached some of their major high tech clients (Notably Mellanox) to pay for the expenses involved in bringing back our children.  Not only did they raise sufficient funds to pay for the stranded Israelis to come home without paying a shekel, but they absorbed a quarter of the expenses THEMSELVES which were in the tens of thousands of dollars!  What? you may say.   You mean the same company that fired almost all its workers and is on a direct path with Bankruptcy? YES.  That one.

Don’t think for a second that this generosity and moral consciousness is alive and well in the aviation industry.  I just heard a report on CNN of tens of thousands of US citizens trapped abroad with no way to get home and no airline coming to their rescue.  Those people have either hunkered down for the duration of the crisis in a foreign country, many of them in high risk areas, or have to carefully arrange charter flights to get home.  I mentioned carefully because some of these “flight organizers” have proven to be crooks and part of widespread scams.  Not in our house though.  EL AL has come through in the clutch and has proven to the country and its people that through and thick and thin our National Carrier will never leave its soldiers wounded on the battlefield.

Last, but certainly not least, my national carrier has taught be a valuable lesson. As we hurdle through this madness, EL AL and its owners have illustrated to us that even in tough economic times it is still important and even imperative to assist our fellow Jews in any way we can.  EL AL has taken a huge and possibly even fatal hit but they still took on a tremendous expense to get our kids back to the relative safety of Israel.  It’s certainly a beautiful lesson about Tzedakah and chesed and one that was not lost on me.

We have all heard and even reveled in the EL AL bashing over the years, some of it valid and some of it not.  I have flown many times to my hometown New York over the last 36 years and have flown them all.  I flew Tower Air, Continental, TWA, United, Delta, American and several other European carriers but after seeing how EL AL stood by their citizens and vowed not to shut down the fleet totally until the last Israeli who wanted to come home stepped on Israeli soil, I unequivocally  and emphatically state “give me EL AL or leave me grounded.”

About the Author
I am a 30 year resident of Maale Adumim, a partner in the world largest Jewish online ad agency, The J Media Group, and co-founder of the The AFI (American Football in Israel) and a frequent traveler.
Related Topics
Related Posts
Danny Gewirtz
Comments