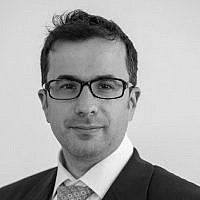 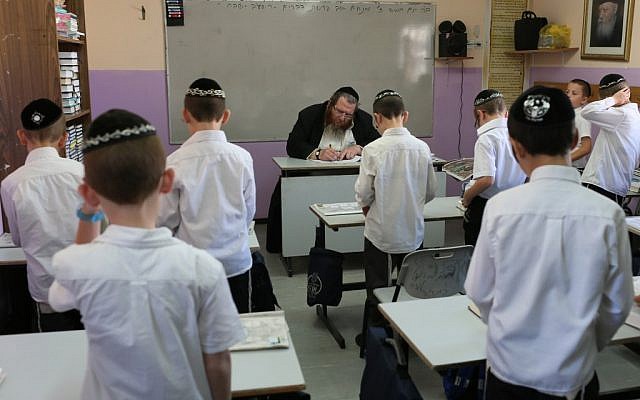 Ultra-Orthodox students seen learning in the classroom of a Haredi 'Talmud Torah' in the settlement of Beitar Illit. (Nati Shohat/ Flash90)

The angel of history just let loose an amused chuckle — for if there is anything the angel of history appreciates it is a fine historic irony. The chuckle came in response to the news that the threat to the survival of United Torah Judaism (UTJ), the partnership of the Hasidic and “Lithuanian” ultra-Orthodox, had been eliminated, and in a propitious hour they agreed that, once again, they would run together for the Knesset.

The official excuse for the dispute that threatened UTJ’s unity was ideological: the war over “pure education.” On the one side are the Belzer Hasidim, who signed an agreement with the Education Ministry whereby its elementary schools (talmudei torah) would teach the core subjects (English, Hebrew, and mathematics) and receive increased state funding. On the other side, the Lithuanians fiercely protested this “breaking of the ranks” in the ultra-Orthodox battle against the core curriculum. The bitter war over the slice of the government funding pie ended when they signed a complicated compromise that buried the Belzers’ plan and the threat of divorce — but only on the surface.

For about three decades the Lithuanians (in the Degel HaTorah party) and the Hasidim (Agudat Yisrael) have been running for the Knesset as a joint list — United Torah Judaism. It has always been a marriage of convenience, with no love lost between the partners. However, after the electoral threshold was raised to the current level (3.25 percent of the valid ballots cast), the union was thought to be a fait accompli, a catholic marriage if you will. But the power struggle between the two sectors is not going to evaporate.

The main source of the tension in their relationship is the balance of power in UTJ. The current balance of power, set after the two parties ran separately in the 1988 Knesset elections, favors the Hasidim. But that arrangement is outdated, as shown by the last municipal elections in Jerusalem, when, running separately, the Lithuanians won six seats on the city council and the Hasidim only three. Today the slots on the United Torah Judaism list are apportioned 50:50; but, as is the case in all compromises, both sides feel cheated. For now, the rivals have concluded that it is better to stick together than risk falling short of the electoral threshold. But given the high rate of fertility among the ultra-Orthodox, the day is not far off when they will be able to run separately without fear of coming up short.

However, when this happens, the result may not be what the leaders of Degel HaTorah have in mind. For a number of years, a growing segment of the ultra-Orthodox has been increasing its engagement with the modern world. According to a study conducted in 2019 by Dr. Lee Cahaner of the Israel Democracy Institute, these “Modern Haredim” account for 11% of the sector; those taking some steps in the direction of modernity come to 29%. Significant numbers of these groups would like their children to study the core curriculum subjects so that they will be able to find a good job when they grow up.

Before the last election, MK Moshe Gafni promised that his party would take steps to open ultra-Orthodox boys’ schools that teach these subjects, but promises, promises, as we know. This is no accident. The idea of teaching the boys English and mathematics so that ultra-Orthodox men can find their *proper place in the job market undermines the foundations of the Lithuanian “society of scholars” and challenges its most fundamental existential principle. As a group, the modern ultra-Orthodox have effectively no political bargaining power vis-à-vis UTJ.

A few years ago, a group of social activists believed that the time was ripe for municipal political representation of the Modern Haredim. However the resounding failure in almost every city where a representative ran on their behalf led to the fact that, starting in 2018, the party ceased to function. Since that time, we have seen no new attempt to pick up the gauntlet. The modern Haredim are still grumbling, but no one represents their interests in the halls of government.

If the ultra-Orthodox community grows enough to make it possible for the Lithuanians and Hasidim go their separate political ways, the weight of the internal minorities that fill out their ranks, so they can clear the electoral threshold (such as the new Haredim) will become significant. Just as the ultra-Orthodox have enjoyed disproportionate political clout for decades, because they hold the balance of power, the minorities within the sector will themselves assume this role because the parties’ survival will depend on them. In that situation, Gafni (or, more likely, his successor) will not be able to allow himself to ignore or break his promises to the more modern wing of his party’s supporters. Degel HaTorah will have no choice; in order to survive, it will have to give serious backing to those who want their sons to study the core “secular” subjects and find paying jobs when they grow up. If it doesn’t, the new Haredim will not have to mount an active revolt against the leadership; suffice it for a large enough group of them to stay home on Election Day, and Degel HaTorah will be “out.” The other ultra-Orthodox parties, too (Agudat Yisrael and Shas) will be able to wink at the new Haredim and promise to represent their interests in the Knesset (as Shas is already trying to do, to some extent).

Like Oedipus, whose doomed struggle against fate and useless flight from Corinth to avoid killing his father and marrying his mother triggered the chain of events in which precisely that happened, twisting Agudat Yisrael’s arm and banishing any possibility of teaching the core curriculum to ultra-Orthodox boys, has started UTJ on a course that will ultimately lead to the core curriculum’s inclusion in Haredi schools and increased integration of the ultra-Orthodox in the Israeli labor market.

About the Author
Eliyahu Berkovits is a research assistant in the Israel Democracy Institute’s 'Ultra-Orthodox in Israel' Program, and a doctoral student in Jewish philosophy at the Hebrew University of Jerusalem.
Related Topics
Related Posts