Israel’s neighborhoods have a car problem – there are either too many cars or too few parking spaces. Either way, my Haifa neighborhood’s sidewalks, like those across the country, are choked up with parked cars. Sidewalks should be for people – children walking to school, caregivers pushing baby-strollers, dog-walkers and every other pedestrian – not for cars. This is only one of many problems caused by our overdependency on private motor vehicles.

Parking on the sidewalk (photo courtesy of BatYam4U). 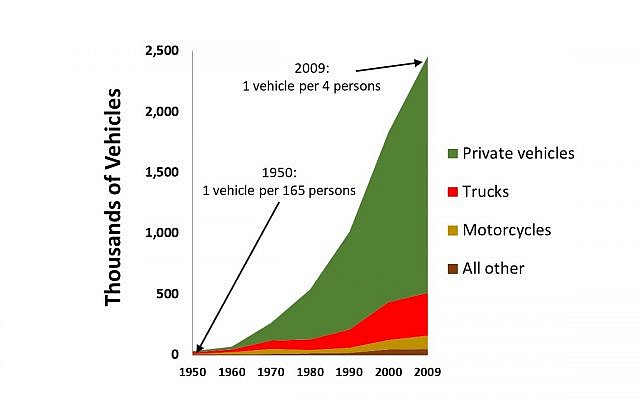 Without immediate remedies, the problem will get worse. Automobile density, if the past is any indication of the future, is only going to rise. Between 2001 and 2016, the number of vehicles on Israel’s roads doubled from 1.4 million to 2.8 million. Considering that private vehicle ownership has correlated with population growth, and population is growing at 2.0% a year (a rate that will lead to a population of almost 18 million by mid-century), we can expect a proportional rise in the number of vehicles on the roads and rising demand for more space to drive and park them.

In response to these worrying trends, the City of Haifa is piloting an ambitious project to relieve traffic congestion by offering a city-sponsored, private car sharing program, Car2Go. 100 Renault Zoe electric vehicles have been spread across the city in 300 dedicated parking spaces. For a small monthly fee, a driver can join the car sharing program. If the program succeeds in reducing vehicle traffic, freeing up parking spaces, and reducing air pollution, the results could be a blessing for Haifa residents.

25 years of experience with car sharing programs around the world supports this optimism. Although overall impact varies depending on the population and place studied, previous experience suggests that Haifa will benefit.

Car sharing, of course, is not for everyone. Drivers who are dependent throughout the day on their cars are better off economically keeping their car. Car sharing is primarily for local commuters or for people who need their car (or a second car) as a convenience. In Haifa, a homegrown opposition to car sharing has emerged in the form of Israel Savion, businessman and long-time leader of Haifa’s Labor party faction. Rather than recognizing the potential advantages of car sharing, Savion sees it as competition to one of his own pet projects, assuring free parking for senior citizens. To cast doubts about the program, he points out that other cities, like Paris, have cancelled their support of ride sharing.

Savion is shortsighted on this issue: Car2Go currently uses 300 out of the tens of thousands of parking spaces in Haifa and will likely free up that many spaces or more as drivers forego their private vehicles (Since joining, I have given up our family’s second vehicle and am attempting to avoid purchasing an a replacement). Further, public transportation planners must work closely with car sharing programs to create synergies and viable alternatives to private vehicle use (such as using car sharing to get to and from public transportation hubs). Savion’s comparisons to Paris are disingenuous, considering that Paris is an exemplary for its pedestrian infrastructure and public transportation systems – incomparable to Haifa and its continued dependence on private vehicles.

Since Savion’s arguments haven’t gained any traction in the public discussion, he, along with an organization with a nice-sounding name, but with seemingly no other objectives other than torpedoing the car sharing program, tried to prevent the continuation of Car2Go in court and lost. 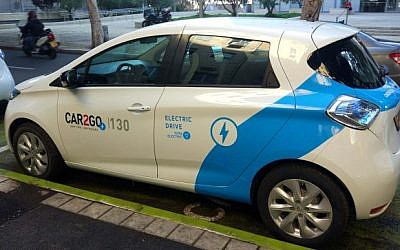 As a Car2Go user for the past three months, I have accrued some personal experience and can attest to the advantages, and even some real disadvantages. On the plus side, the cars are conveniently located, economical, clean and comfortable. The costs are reasonable – more expensive than the bus, but much less expensive than a taxi or purchasing/maintaining my own vehicle. A commute from my neighborhood on the Carmel to the Technion or to the train station is approximately 20 shekels (as compared to 60 shekels by taxi, or 5.5 shekels by bus). Some real disadvantages include: 1) cars are not always available when needed (user commuter patterns tend to be similar, so – for example – in the morning all the available cars migrate from neighborhoods to workplaces); 2) in traffic, the expense rises quickly, because users pay according to time and not distance; and 3) pets are not allowed in the cars.

Car use in Israel, along with population growth, continues unabated. We need creative and diverse plans lowering road congestion, demands on land for parking, and air pollution. Car sharing programs such as Car2Go will not solve these problems alone, but they represent one of a tool-box of potential solutions, including improved public transportation, planning pedestrian-friendly cities, and ride sharing. These should be combined and integrated to provide convenient and better alternatives to the cars that are currently jamming up our cities, highways and sidewalks.