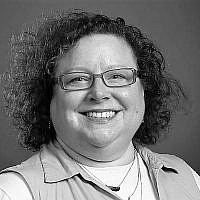 The Blogs
Sarah Bronson
Apply for a Blog
Advertisement
Please note that the posts on The Blogs are contributed by third parties. The opinions, facts and any media content in them are presented solely by the authors, and neither The Times of Israel nor its partners assume any responsibility for them. Please contact us in case of abuse. In case of abuse,
Report this post. 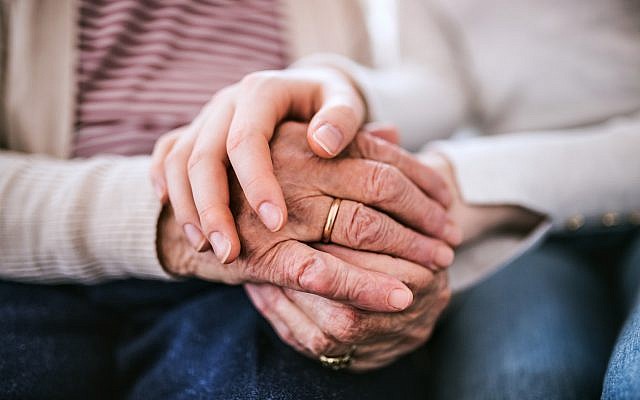 Illustrative. From generation to generation: a granddaughter holds her grandmother's hands. (iStock)

Recently you sent a letter to your community saying that your synagogue would not hold a second reading of Parshat Zachor [a passage of Torah read on the sabbath before Purim], on principle, because traditionally women of the past did not leave their homes for Parshat Zachor, and “what was good for our grandmothers should be sufficient for mothers today.” I would not argue about whether women are obligated to hear Parshat Zachor; I know there are interpretations that support both views, and if you, as a community rabbi, believe that women are not obligated to hear it, then technically there is no harm in not holding a second reading in your synagogue.

I also think there is little need to point out the inconsistencies in your logic. According to your way of thinking, we should send our daughters to public secular schools, because it was sufficient for our foremothers before Bais Yaakov was founded. We should base our judgement of whether a packaged food is kosher by reading the ingredients – no need for a formal kashrut supervision system. We should forego modern mikvaot and use the ocean, and we should learn Torah only on Mondays, Thursdays and Saturdays, because it was good enough for most of our ancestors 2,000 years ago.

There is also little point in dwelling on the stinginess inherent in your statement: if women historically stayed home but wished they were in synagogue, and felt disappointed or frustrated or empty because they would rather be with their community, performing a mitzvah, where is the Ahavat Yisrael in forcing their granddaughters to do the same, when it is so easy to arrange a short Torah reading that would make them happy?

Rather, this letter is about my own grandmothers, may their memories be blessed. I was extremely close with my Omi. She had grown up in Poland. Her father – my great-grandfather – was a rebbe in a small Hasidic sect; my grandmother remembered people coming to her home until late in the night to ask her father for piskei halacha [rulings in Jewish law] and personal advice. I believe most of her siblings were religiously observant, but at least one went the way of many Polish-Jewish youth of the time, when Poland was undergoing great political and social upheaval, and became secular. In any case, all of them were killed in the Holocaust save my grandmother and one brother; he moved to Israel and all his descendants are now secular. My grandmother stayed in Europe where she raised my mother and uncle. In the ’70s, when my grandfather died, all three moved to America, where I was born.

My Omi loved being Jewish with her whole heart. She went to synagogue regularly, she enjoyed attending our Shabbat meals, she taught me to make blintzes, and all her friends were Jewish. She was resilient and loving and I am inspired every day by the memories of her strength and resourcefulness and the fullness of her Jewish identity.

Also, my Omi ate meals on Yom Kippur afternoons. She took taxis to and from our house on Shabbat. She never covered her hair and I’ve seen photos of her from the 60’s where she is sleeveless. Additionally, while she was one of the best grandmothers a person could ask for, she had been a very difficult parent (as many Holocaust survivors were).

My other grandmother was born and raised in the midwestern United States. Her own mother — my great-grandmother — kept Shabbat and kashrut, but neither my Grandma nor any of her siblings were interested in any of it. They went on to live non-observant lives, and when my father announced that he wanted to start keeping kosher, she thought he was crazy. When my father said he is enrolling me in an all-Jewish day school, she thought he was crazy. When I called her to say goodbye as she lay on her deathbed, and I told her I was planning to make Aliyah, she said “Oh, well, do what you want, at least I won’t be around to see it.”

In my family, you have to go back to my great-grandmothers to find a frum woman. But they did not succeed much in passing down a commitment to halacha. Not even one of my first or second cousins are Orthodox, nor is my sibling. I respect their choices, but imagine this isn’t the outcome you, personally, would want for your community. Whatever seemed to work for our foremothers simply didn’t work then. There is no reason to assume it would work now.

Forgive me then, Rabbi, for disagreeing with your idea that what was “good for our grandmothers” should be sufficient for us. When it comes to mitzvah observance, I do not want to model myself after my grandmothers, nor my great-grandmothers. In a series of rapidly-changing societies, the ways they observed Judaism, or didn’t observe it, resulted in descendants who are smart and kind and proud to be Jewish — but not committed to halacha. Perhaps my great-grandmothers did not realize that they needed to do more than act as passive role models. They needed to be pro-active. They needed to model behaviors such as, for example, going to the trouble of attending synagogue to hear Parshat Zachor.

Forgive me, Rabbi, for believing that when it comes to living a fully religious life, what was good enough for my beloved grandmothers would not be sufficient for my own children. If women in your community strive to hear Parshat Zachor, it would be smart to trust that they know what they and their children need, and take the few easy steps required to make it easier for them to provide the Jewish environment they are trying to create for themselves and their families.