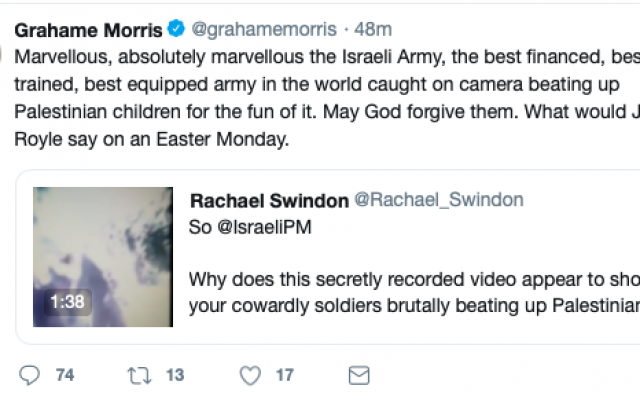 It’s a bank holiday Monday and you are a Labour MP.

Do you spend the day in the sunshine, do a bit of campaigning for the local elections or tweet false accusations about Israel?

Morris said: “Marvellous, absolutely marvellous the Israeli Army, the best financed, best trained, best equipped army in the world caught on camera beating up Palestinian children for the fun of it. May God forgive them.”

Within an hour it was made clear to him that the video was from Guatemala. It took him 17 hours to apologise properly.

Morris should know a lot about the Israeli-Palestinian conflict. He was the Chair of Labour Friends of Palestine and the Middle East (LFPME) for five years and has visited the area many times. You would think he had developed some basic understanding of the issues and how dangerous these kind of lies can be. Not a chance.

His intervention was ignorant. But once his lies were exposed, he left the tweet up for several hours after he knew the video had nothing to do with Israel. His action was inflammatory and designed to stir up anger towards Israel.

It was also evidence of a double-standard – once informed it was Guatemalan soldiers, Morris didn’t express any opinion or condemnation of the actual incident, or inquisitiveness about the situation there, it was only when he thought it was about Israel that he cared.

Grahame Morris has form for this kind of dangerous intervention, calling in 2014 for British Jews who serve in the IDF to be treated as IS-style suspected terrorists, and issuing a clumsy tweet the same year with a picture of Israeli flags and the words: “Nazis in my village, do you see the flag they fly.”

These are not the actions of a man who has anything useful to offer in a debate about Israel and the Palestinians in the UK. The Palestinians deserve better advocates than these in the Parliamentary Labour Party.

They deserve MPs making their case who have the common sense to check sources before tweeting anything this contentious, and the common decency to apologise immediately when they are alerted to the fact that their video shows something completely different to the claim they were making about it.

LFPME’s list of 128 parliamentary supporters includes people who make vociferous, intelligent interventions on behalf of the Palestinians without ever making offensive gaffes like this.

Grahame Morris brings nothing to this debate, he should be ashamed.