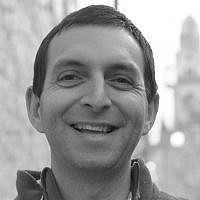 The Blogs
Samuel Green
Tour Guide, Educator, Music Lover, Zionist
Apply for a Blog
Advertisement
Please note that the posts on The Blogs are contributed by third parties. The opinions, facts and any media content in them are presented solely by the authors, and neither The Times of Israel nor its partners assume any responsibility for them. Please contact us in case of abuse. In case of abuse,
Report this post. 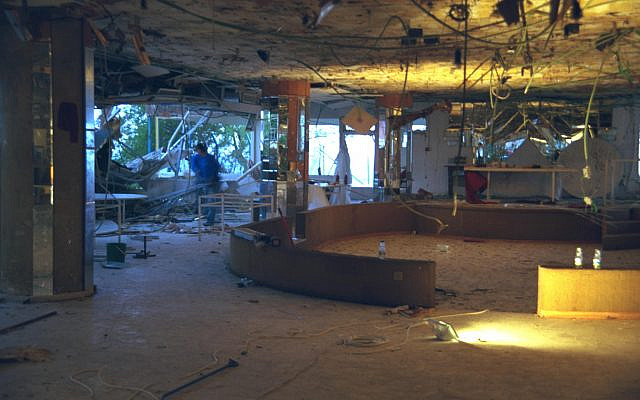 The dining room at the Park Hotel in Netanya after a terror attack on seder night 2002. (Noam Sharon / Israel Defense Forces)

Another busy week had come to its close. My wife had headed out to meet up with some friends. The kids were finally asleep. I made myself some supper and sat down in front of the TV to finally watch a film I’d been waiting to see for weeks.

And then…gunshots? Five to six short “pops” in succession. It sounded like it was outside my window. I didn’t look – I knew that if it was gunshots then I was best advised to stay away from windows. I counted my blessings that the kids were asleep. Called my wife – she was well out of Tel Aviv by then. Called my parents. They were at home. And then a second burst of fire. My Dad tried to convince me it was a motorcycle. But then I could hear the sirens and screams.

A cousin texted me asking if I was ok. I was surprised that she’d heard the shots as she lives in a different part of the city. But it turns out that she was on the street metres from where it happened. I told her to come to our place but she was scared (it turns out, justifiably) to move around and was hiding in the porch of a building on a nearby road. I called friends on that street and asked if they could take her in. Several hours later, she’s still there.

I turned on the news and there was the name of my hitherto quiet little street, located just behind the main artery of Dizengoff, apparently the location of a shooting. The pictures of my neighbourhood, the cafes and bars I walk past every day.

And suddenly I was transported 20 years back in time. Almost to the exact day. On 27th March 2002 I was in Netanya to celebrate the seder. I had been in Israel for several months as part of a year programme before university and my family had flown out from England for our Pesach break. It was a celebratory atmosphere – my birthday was the next day. But it was also the middle of the Second Intifada.

Around half-way through the seder I began to hear sirens. Not so out of the ordinary – we weren’t too far from Netanya’s main hospital.

But the sirens didn’t stop. Something was wrong.

We don’t use the TV on seder night but I told everyone to stop the seder and made an executive decision to turn it on. The images were terrifying. The Park Hotel was about 5 minutes walk away from us; it had been blown to smithereens by a suicide bomber. The terrorist walked into a dining room crowded with families celebrating the holiday and set off his explosive belt, killing 30 and wounding 140. It was one of the worst attacks of the Intifada and the symbolism of it taking place on seder night was particularly traumatising.

I’ll never forget that night. The sirens kept going for hours. We continued our seder but no one was in the mood for it. The rest of the holiday was thrown off course by the ensuing Israeli operation in the West Bank. And one of my friends from the programme who was supposed to have been staying at the Park with his parents ended up staying with us (his parents didn’t even get on the plane after what happened). We were all just grateful that they’d not planned to check in before the holiday started.

It helped that the programme kept us wrapped in cotton wool with a series of security-related restrictions designed to reduce our risk. At one point we couldn’t even leave our campus for a month. But there was something reassuring about having these rules. It gave us a sense of security (however unjustified that may have been) in the limited activities permitted to us. Something that the general public didn’t have at all.

Fortunately this meant that we all stayed safe, although there were a few very close calls. But it affected us more than we realised. I remember how when I eventually came back to England I felt nervous being in crowded spaces for months.

Tonight it all came flashing back. As I write, the sirens are still going. The helicopters are overhead and there are announcements on police megaphones to stay inside until they catch the terrorist. They’ve been at it for hours. My daughter woke up and asked me to stop all the noise. Fortunately she’s blissfully unaware of what’s causing it.

Messages are flooding in from around the world as the news spreads. It’s wonderful that people are in touch; it’s moving; it makes us feel loved. But it’s overwhelming.

“Are you ok”, they ask. “We’re ok”, I reply. But we’re not. At least, I’m not. I can’t be ok. I’m traumatised. I heard real-life gunshots from my sofa. I was out last night; if this attack had taken place twenty-four hours earlier, I might well have been caught up in it.

I’m not ok. I’m coping. And that’s enough for now. But that’s tonight, and the real challenge begins tomorrow.

Because unlike 20 years ago, I have more to worry about than just myself. There’s my wife who still can’t get home and will be staying overnight with her parents. There are my kids who have no idea what’s going on – and we’ll have to make choices about whether we take them out, and to where, in what circumstances. When we’re outside we’ll have to have a much more heightened awareness of our surroundings. And I don’t have the sense of security, however false, that came with my restrictions on my gap year programme.

I fear this will get worse before it gets better. This is just the latest in a series of significant terror attacks around the country in the past couple of weeks. And just a two of days ago the PM said that they’d prevented over 10 similar attacks in the past few days.

Twenty years have passed and suddenly it feels like nothing has changed. But I reassure myself with the thought that as a country we’ve got through terror waves like this time and time again. We’ll get through this one also. Hopefully sooner rather than later.