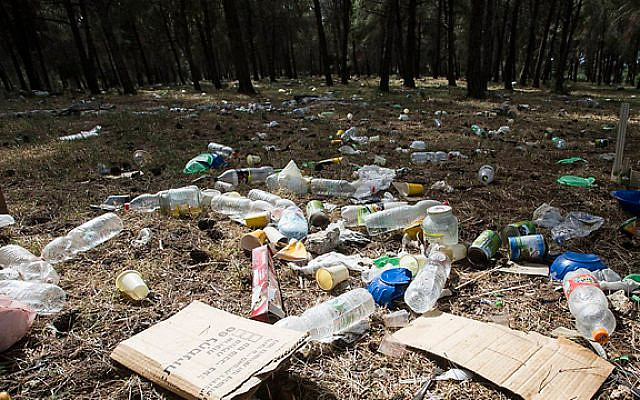 Researchers have calculated that Israel's micro-plastic concentrations are among the highest in the world. (Courtesy Alon Tal)

What a long strange trip it’s been. Sunday, Israel’s environmental minister Gila Gamliel finally completed an important regulatory mission for cleaning up our country: consumers who return large disposable beverage containers (1.5 liters and more) will be able to receive a handsome deposit fee of 30 agurot (9 cents). Environmentalists rightly saluted the minister for making such a bold decision. But how did such a commonsense policy measure take so long to become a reality in Israel?

Here’s the story behind this bizarre episode in the country’s environmental history:

In 1994, I was running what was then a very new environmental organization, Adam Teva V’din, the Israel Union for Environmental Defense. We were approached by a local recycling company with a proposal: Would we would be willing to draft a “bottle bill” for Israel? In those days, at best, beverage containers were simply tossed in the trash. Even worse, they were a very common sight on our beaches, parks and streets.

The recycling company assumed that if an environmental organization proposed the law, it would have a better chance of passing. After all, they – the company – were hardly a neutral party. A bottle deposit law promised to produce a critical mass of polyethylene terephthalate (PET) plastic, large enough for the company to justify building a recycling plant.

Our organization had plenty of lawyers but no economists. So the recycling company promised to provide the requisite economic expertise if we would prepare the legislation. At the time, the world was already celebrating the success of bottle bills, which were helping to create a recycling revolution. Israel was way behind. We accepted the challenge.

This was before the days of internet, so we approached science attaches in embassies across Tel Aviv. Within a few weeks about a dozen examples of bottle bills had been faxed to us for our benefit. The legal staff sorted through the different models and figured out what made sense for Israel, then we wrote a new law that took the best elements of each. (As memory serves it mostly was a combination of bottle deposit laws formulated in Spain and Michigan.)

Dedi Zucker was a very clever, “green-minded” Member of Knesset from Meretz with whom we had worked in the past. He immediately agreed to take on our proposed law. He was a busy guy, so the bill sat on his shelf for a couple of years. But eventually, in 1998, he submitted the proposed law after merging it with another legislative proposal on the subject.

The bill passed the initial reading in the Knesset in jig time and soon was returned to the parliamentary Economics Committee for discussion. Everyone seemed to think it was time that Israel join the ranks of the enlightened countries with bottle deposit fees. The new law looked destined to be a slam dunk.

Imagine our surprise then, when we arrived at the hearing to find a well-coordinated, campaign to derail our environmental legislation. As in other countries, the logistic burden of receiving bottles and returning deposits was not a public service that supermarket chains or bottle producers were excited to provide. But what could they possibly say about a law that had a proven record of cleaning up a country’s litter? So the unholy coalition engaged the leadership of the Shas party and convinced them that our Deposit Law was an affront to the ultra-Orthodox way of life: “Haredi wives shouldn’t be forced to drag bottles back and forth as in days of old,” their MKs argued. “This is a regressive environmental tax.”

“But it’s not an environmental tax,” we tried to explain in exasperation. “It’s a polluter pays opportunity. There is no country in the world that exempts large bottles from a bottle bill. And beverage containers, after all, are about half the litter sullying our country.” Alas, our protestations fell on deaf ears.

The Shas party is always in the coalition. The virulent opposition from its lawmakers spelled disaster, threatening to turn the government against the law and to kill the initiative. The remaining Knesset members on the committee decided to be pragmatic. They convinced the Shas politicians that smaller bottles and cans were only sold in bars, restaurants and other dens of debauchery that the Shas public would never frequent. The Shas politicians were delighted with their easy victory and graciously allowed the law to pass, so long as only smaller containers would be regulated. And so it was that Israel’s large soda bottles, apparently a staple of the Haredi diet, were exempted from the deposit fee.

“Don’t worry,” promised the confident MKs. Next year, we’ll amend the law and include large bottles in the deposit program.

And so we waited….and waited… for 21 years. Every single minister of environment that has taken office since promised to cancel the absurd exemption. And every one of them blinked when the big bottle coalition reignited the Shas opposition.

But now all of that has changed. As of now, a particularly bizarre chapter in Israeli history is behind us. Within a year, a new infrastructure will be introduced into our markets. Like so many European countries, consumers will simply toss bottles of every size into giant machines and immediately receive some coins for getting the plastic trash off the street.

Part of the reason for the Minister’s “bold” decision is economic. According to the calculations of environmental economist, Doron Lavee, the public will benefit by some 56 million shekels in the form of deposit returns. Israeli cities will surely benefit from the removal from its sidewalks of some 24,000 unsightly recycling cages into which well-meaning citizens voluntarily throw their large bottles. Most of all, hundreds of millions of ugly, empty bottles will no longer sully our lovely land of Israel. Now that they are worth 9 cents, there is plenty of incentive to pick them up.

In recent years, Israel has been found to suffer from an acute plastic problem. Microplastics, the tiny pieces of plastic that are swallowed by marine organisms of all sizes (and eventually ingested by humans who eat fish) are ubiquitous along Israel’s Mediterranean coastline. Researchers have calculated that our country’s micro-plastic concentrations are among the highest in the world, as much as two orders of magnitude higher than the average in other countries. These tiny plastic fragments attract other hydrophobic substances like oils and pesticides, magnifying the adverse effects. For the coral and the fish in the fragile reef in Eilat, the impact is particularly catastrophic. Plastic bottles are part of the problem.

These are hard times for public health and the environment. When something good happens, we should cast our despondence and cynicism aside, at least for a day, and celebrate. So three cheers for Gila Gamliel and Israel’s ministry of environmental protection.