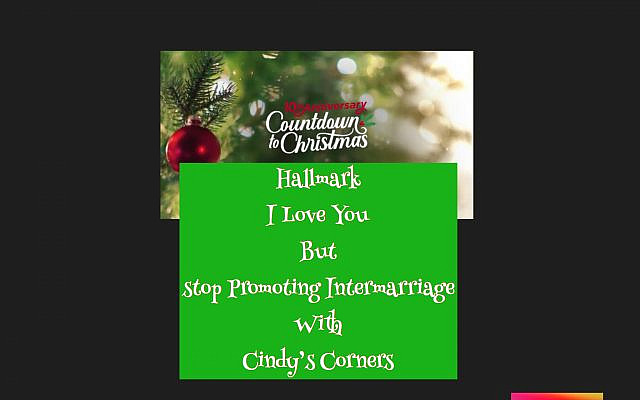 I am a real Hallmark Movies Fan!!! June Weddings, Fall Harvest, Mysteries Miniseries and of course, Countdown to Christmas. I can’t wait until October for the new holiday movies to begin. I watch the Thursday night choices and on demand, plus Christmas in July. I love how your channels’s movies give hope to children of divorce or suffering the loss of a parent, make getting lost never lonely and the best of all, people eat endless amounts of gingerbread and sugar cookies while drinking multiple cups of cider and hot cocoa with extra marshmallows and never get a sugar rush or gain a pound. The worst part of this time for me is a lack of sleep, because I set my alarm to watch a movie at 2AM.

When I have time and need an escape, nothing thrills me more than escaping to Christmas mountain or honoring veterans with Hallmark Movies. My personal favorites are The Christmas Card, The Christmas Secret, Christmas Homecoming and anything with Lacey Chabert. They are runner-ups to The Christmas Crown. Danica McKellar never looked prettier and probably the best written line for your movies is, “You had me at sewing kit.”

I am waiting for the day when my two favorite couples reprise their roles for Christmas movies in All Of My Heat: The Inn At Christmas starring Chabert and Brennan Elliott and The Perfect Bride: Newlyweds At Christmas with Pascale Hutton and Kavan Smith.

For me, Christmas and Chanukah are the best time of the year. People are nicer to each other, which in the times we are living in is needed. I love the family gatherings and the traditions that are shared. People no longer with us are discussed, remembered and even honored. It’s also a good time to seek out sales, go on vacation and talk to colleagues at business holiday parties and get to learn more about them as a person. It’s a great time to volunteer and give charity to your favorite organizations, which can be as simple as handing out a snack out a food bank or spending a few hours at a senior center singing songs.

Unfortunately for many who are not as fortunate as me to be surrounded by family and friends, this season is not as joyous and filled often leads many to suffer depression and loneliness. Your channel offers the kind of entertainment that gives these people hope. It’s part of the Hallmark Channel formula.

I was super excited when it was officially announced that there was going to be Chanukah movies.

I remember how disappointed I was when the movie Holiday Engagement premiered in 2011. Jordan Bridges ( Beau’s sob, Lloyd’s grandson and Jeff’s nephew) played a Jewish man who lies about his religion, falls in love and then marries the non-Jewish girl and celebrates Christmas. It really turned me off then.

But now, major media outlets, many mainstream and non-Jewish are complaining about the yet-to-air offerings this season as being anti-Semitic and actually about Christmas.

And, since I am a loyal Hallmark follower, I recognized the plot being recycled, and promoting this season’s storylines as new is factually incorrect.

We the Jews don’t need fairytales filmed for entertainment to air our dirty laundry about intermarriage. We Jews are struggling with it. And, in real life, we deal with children of divorce and custodial issues that often confuses younger ones of what and how to celebrate any holiday and with which parent.

One excellent point your movies point out is that intermarriage usually doesn’t help the Jewish population, it diminishes it. Few intermarried couples practice Judaism, their children don’t usually practice Judaism or identify as Jews and even less practice the laws that have kept us “The Chosen People” for thousands of years.

Yes, intermarriage is a threat to our future.

Matzoh balls is not a religion, but laws of Shabbos, Kashrut and Standing Under A Chuppah are laws of our people.

In a time of rising anti-Semitism and hate for Israel and Zionism, Jews around the world, religious or not, do not need these movies to brainwash haters that by getting Jews to start celebrating Christmas, the world will be OK and Jewish leadership will be welcoming and adaptable to this view.

Hallmark Channels could make itself a hero with scripts featuring Hanukkah in Israel, donut bake offs and contests featuring potato latkes. Characters could compete in dreidel contests, menorah lightings and ugly Chanukah sweater contests. How about a Hanukkah mystery— a modern day search on how the oil lasted eight days.

I handed you free screenplay ideas— use these.

By the way, Lifetime Channel— your Chanukah offering Mistletoe and Menorahs was no better.

Same romance story as on Hallmark, actually promoting a Jew and a Christian falling in love.

The Black and LGBT communities are calling for boycotts of Hallmark Channel claiming lack of diversity. I am not suggesting that.

Freedom of entertainment is just that. But I am highly recommending that if you want to incorporate Chanukah, do it in a way that is positive and accurate, and about the miracles of the holiday, not ignoring them.