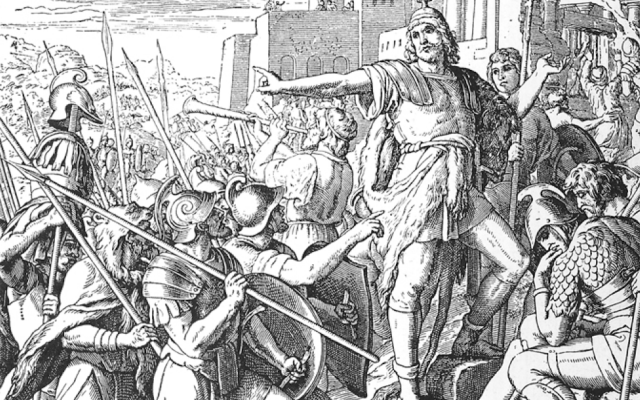 Hanukkah means different things to different people. For some, it’s all about the presents. For others, it’s about the menorah. For yet others, it’s about Jewish strength. In fact, I believe that about 100 or 150 years ago, a group of people tried to hijack the holiday of Hanukkah. Eliezer Don-Yehiya, a political science professor at Bar Ilan University, wrote an article in the Jewish Journal of Sociology entitled, “Hanukkah and the Myth of the Maccabees in Zionist Ideology and in Israeli Society.” In this article, he argued that Hanukkah was one of the Jewish traditional festivals which the Zionist movement employed to assert the continuity of Jewish identity and the national right of the Jews to the Land of Israel.

The renewed importance given to Hanukkah was apparent from the early beginning of the organized Zionist movement in 1882. In fact, Theodor Herzl concluded his book, The Jewish State, with the words: ‘The Maccabees shall rise again.’ The early Zionists understood Hanukkah primarily as a nationalist holiday, as a struggle for national liberation. But they had a problem. What do you do with all of the religion that we find in the story? The Hasmoneans were willing to fight to the death for the right to observe Shabbat, brit milah and taharat hamishpacha. How did the secular Zionists fit this reality into their new secular Zionist ideology?

Professor Yehiya wrote that different Zionist groups struggled with this issue and came up with different solutions. The Revisionists, forerunners to the Likud party, saw themselves as muscular Zionists. They glorified the Zealots who revolted against the Romans, but they actually also sided with the Hellenists. They admired the young Hellenizing Jews who took part in wrestling competitions and who were among the bitter enemies of the Hasmoneans. In fact, in 1905, Ze’ev Jabotinsky from the Revisionist party declared that mankind should be eternally grateful to Hellenism, which was the first movement to point to sports as the best educational means for creating, by prolonged training and willpower, a type imbued with spiritual beauty and courage.

Israel Eldad, a religious Zionist philosopher, summed up the strategy of secular Zionists when he noted that Zionism appropriated the form but not the content of the war of the Hasmoneans. There’s a popular Hanukkah song: “Mi yemalel gevurot Yisrael otan mi yimneh hen b’chol dor yakum hagibor go’el ha’am.” This is a song that was composed by a Zionist, Menashe Ravina, in the early 20th century and it’s characteristic of this ideology. The phrase, “mi yemalel gevurot Yisrael” is taken from a verse in Tehillim (106:2), “Mi yimalel gevurot Hashem” or “who can recount the strength of God.” However, God is not mentioned in this song. The song replaces “God” with “Yisrael.” The song continues, “hen b’chol dor yakum hagibor go’el ha’am” or “in every generation a strong man arises, a redeemer” – and in the next stanza, who is the redeemer? Hashem is not mentioned; rather “Maccabee moshia u’fodeh” – a Maccabee is the redeemer. There is no God in Hanukkah according to this song and this ideology. Of course, in reality, God and religion play such a prominent role.

There was a strong reaction to this approach. Yitzchak Breuer, a major Haredi leader, argued that “the Hellenizers loved the land but loathed the Land of Torah… It is not for the Jewish State that the Hasmoneans fought but for the People of the Torah.” This approach ignores the nationalistic elements of the holiday and focuses only on the religious aspect. Both this perspective and that of the secular Zionists ignore an important aspect of the holiday of Hanukkah, albeit different ones. By ignoring either the religious content or the nationalistic content of the holiday, both have hijacked Hanukkah to fit their own ideological aims.

Religious Zionists can incorporate both the religious and the national content of the holiday without compromising our ideology at all. However, maybe there is even more to the holiday than the national and religious content. The Torah states that when the mishkan was built, the glory of God filled the mishkan. Additionally, when the first Beit Hamikdash was built, the pasuk in Divrei Hayamim states that the glory of God filled the mishkan. Both the building of the mishkan and the Beit Hamikdash created a tangible sense of God awareness.

However, when the second Beit Hamikdash was built, the book of Ezra states that the elders who had witnessed the first Beit Hamikdash cried. Some commentaries assert that they cried because it wasn’t as big as the first Beit Hamikdash. Perhaps, though, what was missing was the glory of God, the God awareness. Perhaps for another 300 years, the people were wondering if they could recreate this God awareness in their holy Mikdash. Finally, after we fought for our religion and after we were willing to give up our lives for the sake of God and His Torah, the Mikdash was rededicated during the story of Hanukkah. So too, perhaps the miracle of lights was a long-awaited sign that the glory of God was once again present in the Mikdash.