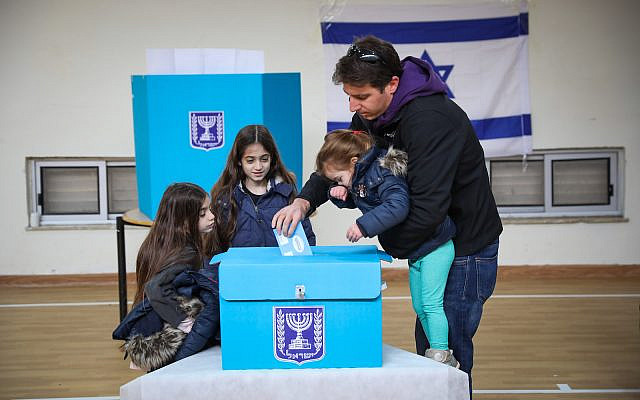 People cast their ballot at a voting station in Jerusalem, during the Knesset Elections, on March 2, 2020. Photo by Olivier Fitoussi/Flash90

I feel deeply ashamed, President Ruby Rivlin said, as he prepared to vote this morning, acknowledging the failure of a political system to fulfill its most basic promise: to create a functioning government.

And yet, as I go to vote, I feel an unexpected surge of Israeli pride. In another society, cynicism might have defeated the spirit of responsibility that keeps us grimly committed to our civic duty. But here we are, the people of Israel, back again for round three. Israelis joke that we love democracy so much that we can’t stop voting. And if, in a few months, there is a round four, most of us will surely be back. However cynical we are about our leaders and, increasingly, about the system, we will continue to vote until there is a damn outcome. We all know: there’s too much at stake not to.

Entering my local polling station, in a high school in my Jerusalem neighborhood of French Hill, I encounter that wonderful Israeli combination of humor and grim determination that gets us through one crisis after another, whether in war or in domestic struggle. Strangers smile at each other, ruefully: So here we are again. It’s good we have elections a few times a year, I say to the man waiting on line in front of me; this way we get a chance to meet the neighbors.

I greet a friend on the line, who lost her brother in war. She is, I know, a passionate left-winger. So you’re voting for Labor-Meretz, I say rather than ask, assuming that she is once again voting left. Not this time, she says. This time she’s voting for Benny Gantz and the centrist Blue and White party. To stop Bibi.

Me too, I say — though a vote for the center comes more naturally to me. I’ve been voting for the Israeli center for decades — small parties that rose briefly and then disappeared, erased from national memory. This time, at least, I am part of a major bloc. I vote center because it is the place where I can best express my Israeli ambivalence — which isn’t ambivalence at all but a clash of conflicting certainties. I know the left is correct that we need to separate from the Palestinians; and I know the right is correct that we can’t trust their leaders to make peace. And so, like so many other Israelis, I find myself in the center.

And yet, this time the contest isn’t about settlements and borders or religion and state. It is about the future of Israeli democracy.

It’s not only Netanyahu’s blatant corruption — the dirty Nixonian tricks like wiring a rabbi to record a senior Blue and White adviser and urging him to besmirch the party leader, or Bibi’s willingness to throw the system into chaos to keep himself out of prison.

In this election campaign, he went one step further: He mocked our most cherished Israeli norms. When he flew to Moscow to retrieve a freed young Israeli woman in prison on drug charges, he turned our profound commitment to protect each other — the Gilad Shalit ethos — into an electoral stunt. And then, seeking votes from the Ethiopian community, he suddenly approved the immigration of a group stranded in Addis Ababa for years because their Jewishness has been contested. No other prime minister ever cheapened the “ingathering of the exiles” — the founding ethos of Israel — as Bibi did with that cynical decision.

Two young men in the uniforms of the Border Police are waiting on line to vote. So you’re voting for Meretz again? one says to his friend. They both laugh; of course, they’re voting right.

I cringe. It’s hard to feel generous toward political opponents when you feel the future of your country is at stake.

And yet I look at these two young soldiers and think: How can I turn them into an enemy? They’ve taken time off their military responsibilities to be here because they care about this country no less than I do. Whatever our politics, we are all here sharing the same impulse: the need to protect Israel.

Davka — especially — because I feel so passionately about this election, I need to remind myself how Israeli reality looks through the eyes of those voting for the other camp. Why get rid of a leader who has kept Israel safe and prosperous through the disintegration of the Middle East and in the face of security threats few if any other country faces? And if Netanyahu is a bit unscrupulous, maybe we need to adopt some of the norms of the region in order to survive in it.

Tomorrow morning, we are going to come together again, in our workplaces, in school, in the army, and function as a society. A little ambivalence on both sides of the political divide would help. And so I ask Netanyahu supporters: Aren’t you concerned about the Israel he is leaving us? Don’t you too fear for the vitality of our democratic institutions, our national cohesiveness? Isn’t that concern a perquisite for patriotism?

As for those of us voting Blue and White: We need to concede the legitimate concerns about Gantz, who stumbles through interviews and who was described as weak and indecisive by one of his closest advisers.

I’m voting for Gantz not because he is my ideal candidate, but because I believe that, for this desperate moment for Israeli democracy, he is good enough. Think Gerald Ford to Bibi’s Nixon. (Americans who grew up in the ’70s will understand the metaphor.) And so, along with my passionate certainties, there is also anxiety.

Standing on line, I realize that, even as I worry for Israeli democracy, I am quietly celebrating its vitality. And I’m celebrating, too, our shared love for Israel, our refusal to surrender to cynicism, our capacity for simultaneously maintaining passionate commitment and ambivalence.

It’s my turn to vote. Carefully, deliberately, I put the paper ballot in the envelope. It feels like an act of prayer.