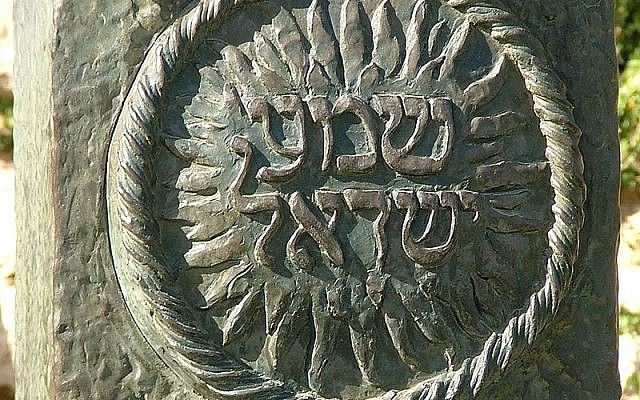 Welcome to a special installment of my blog on gematria, the merkabah and the birth of the alephbet.  Today I wish to share with you some truly amazing, beautiful and awe inspiring gematria work by Reuben Levi on the Shema!  It brought tears to my eyes and I thank him for revealing it and allowing me to share it with you.  ~ Bethsheba Ashe.

Reuben Levi ~
Using the Chariot gematria, I took a look at the Shema, which is known as the “watch-word” of the Jewish faith― whatever a “watch-word” is. Those of you who know a little about the format of a Jewish prayer service may know that the ḥazzan (cantor) calls out the Shema (Deuteronomy 6:4) as it is written:

The gematrical value of this verse using Chariot gematria is 614― ONE MORE than 613.

The following verse does not appear in the Scripture, and if person is praying alone or in a group of less than ten, it is uttered silently― but when a congregation of at least ten people is present, they respond to the leader’s recitation of the Shema by chanting the following phrase aloud:

The gematrical value of this phrase using Chariot gematria is 665― ONE LESS than 666.

At Beth’s suggestion, I decided to see what would happen if I substituted “King Solomon” (שלמה המלך) for “His Majesty’s Name” in the response:

Lo and behold, the gematrical value sums to exactly 700!

Knowing that King Solomon was also known as Jedidiah (ידידיה), I tried substituting that name instead:

Wouldn’t you know it, the gematrical value is 665― the same as the traditional response.

It’s worth mentioning that in Kabbalah, the opening verse of the Shema is associated with Heaven, because the word Eloheinu (“Our God”) dwells in it. The response line, then, is associated with the Earth. Traditionally, the Shema is recited when wrapping the tefillin (phylacteries) to the forehead and to the left arm (beside the heart). The significance of this ritual is to “bind” the head, heart and hand into ONE: a unified vehicle for carrying out God’s work on Earth.

In concordance with that precept, the response to the Shema is worded in a very particular way. If you’re familiar with Hebrew or the Jewish liturgy, then you may know that ברוך שם כבוד מלכותו לעולם ועד is typically translated as “Blessed be His glorious Kingdom forever” or “Blessed be the glory of His Kingdom forever.” For those who understand Hebrew grammar, this presents a bit of a problem, because the word kevod (“glory”) is a noun, and is interposed between shem (“name”) and malkhuto (“His Kingdom”).

*Without getting into the intricacies of Hebrew noun construct-chains, the phrase is syntactically odd in that שם כבוד מלכותו literally parses out as “[the] name [of the] glory [of] His Kingdom.” So the glory of His Kingdom has a name? Not exactly. There’s a nuance at play here. The word מלכות means “kingdom” but could also be rendered as “kingship” or even “majesty.” The fact is, כבוד מלכותו is meant to be read as a single unit: an honorific comparable to “His [Glorious] Majesty.” That’s why I translated it as above: “Bless His Majesty’s Name forever.” (That’s what cued Beth into the idea that “His Majesty’s Name” might in fact be the name of King Solomon a.k.a. Jedediah.)

To wrap it up (no pun intended) the Shema and its non-Scriptural response are symbolic of the channeling of Divine Energy from Heaven to Earth. As stated above, the Shema itself represents Heaven, while the response represents Earth. To be more precise, the first line represents the highest Heaven, known in Kabbalah as the World of Atzilut (“Emanation”). The response is like a ladder that steps down one word/world at a time and ends on the Earth. Let’s consider the phrase as literally parsed, “Bless the NAME of the GLORY of His KINGDOM.”

So by wrapping the tefillin and reciting the Shema and its response, we are performing a ritual symbolic of transmitting Heavenly power down to the Earth. At the start, I demonstrated that the gematrical value of the Shema is 614 and the value of its response is 665.The last word of the former is “one” and by transmitting a 1 (i.e. God) down from Heaven to Earth, we end up with 613 Mitzvot above, and 666 representing the Earth below.

In our solar system, any planet’s orbital period (i.e. the time it takes to complete one whole circle around the Sun, in years) is directly related to its average distance from the Sun. If P is the planet’s orbital period in years, and D is its average distance from the Sun in Astronomical Units (AU) then the equation to derive the later from the former is D = P·⁶⁶⁶. That is, D equals P to the power of 0.666. This is accurate to at least 99.9% for every planet from Mercury to Uranus, and accurate to 99.8% for Pluto. You can do the math to prove this.

What a beautiful gift for the holidays!  Note ~ the Palace of King Solomon in 1 Kings corresponds with the first Palace of the Seven, which becomes the Sephiroth of Yesod and Malkuth on the Tree of Life.

And that’s a wrap for today [also no pun intended!]  Thank you for reading my blog and for all your support and encouragement.  We truly appreciate it.  Have a wonderful day.  I’ll be back in the new year with my analysis of the Sefer Bahir, so stay tuned for more numerical honey!