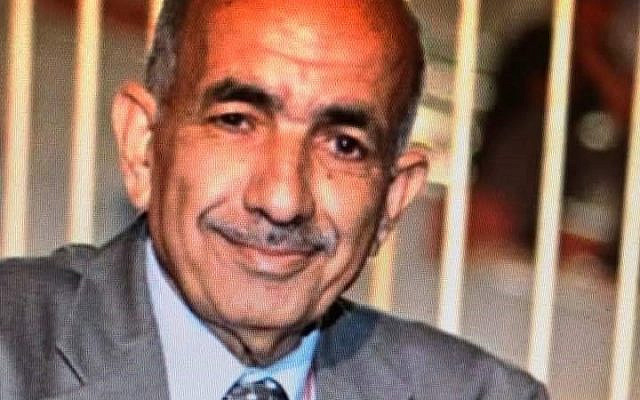 Jamal Afif Niser wasn’t swallowed by a whale, like the biblical Jonah – but Niser might conceivably wish he’d been disappeared inside a whale instead of inside the Israeli gulag known as “administrative detention.” And who could blame him? At least Jonah got out again in one piece and, insofar as we know, never got re-swallowed. If only Jamal Niser could be as fortunate.

A married father of three, grandfather of six, a Palestinian-American from Ohio, prisoner Niser is 76, is diabetic and is now partially blind. He has never (repeat: never) been convicted of any crime – and indeed, he has never been charged with any crime, has never been tried in a court and insofar as anyone knows, has never so much as shoplifted a candy bar at the corner grocery as a child. Israel’s gulag houses hundreds of such “administrative detainees” – how’s that for Orwellian Doublespeak?  In Israel’s version of a gulag, they can put you away for months at a time – no charge, no trial, no conviction, and also no meaningful appeal – and around the day of your expected release, they can renew the detention for another X months. As they often do. As they have done in this case.

Now is where you find yourself wanting to say: “But…”

At this point, the average reader, seeking to repress the dissonance that this scenario typically evokes, may understandably begin to wonder… But still… maybe they had a reason? He must’ve done something to end up in prison, right?

Well, no. Just: no. You need to bear in mind that the “reason” (which is kept secret in any case) bears no relation to anything the detainee may or may not have actually, personally, done. Just because Israeli authorities decide they have a reason to lock someone up doesn’t mean the person has done anything wrong – except of course, breathing while Palestinian. If this nightmarish account seems harsh and makes you want to rush to deny it as implausible, that’s only natural. But averting our gaze from these facts for decades is precisely what has allowed this phenomenon to emerge and to persist. There is no accountability and not enough people care enough to induce a change of course on Israel’s part… thus far.

People familiar with this field can cite you several likely motivations Israel seems to have for locking up a non-criminal. Maybe they decide to incarcerate a person whose cousin is suspected of a crime, as an interrogation opportunity. (In Niser’s case, as described below, he voluntarily reported for interrogation and they later came for him again anyway and hauled him away in the middle of the night.) Maybe they lock up someone who is the spouse, the parent, or the sibling of a suspect, to try to get the detainee to reveal that person’s whereabouts. Maybe the person has a lot of political street cred and they want him, or her, out of circulation for a while (Palestinian legislator Khalida Jarrar comes to mind).

It is not a crime, however, to be related genealogically to a suspect. Sharing someone’s DNA is not a criminal offense. (Note that even the “suspect” with some familial or other relation to the detainee may also be innocent of any actual crime; it’s a big tent.) The point is that Israel’s administrative detainees can never challenge the basis of their incarceration or its duration or its renewal, because they cannot find out what it is that motivated Israel to lock them up. Their lawyer cannot find out what it is, if anything, that they are accused of. The security authorities do not have to tell a judge precisely why they want the person behind bars. If the detainee retains an attorney who tries to get the facts, the security authorities will tell the judge that it’s “a security issue” which is the Israeli gold standard for awarding carte blanche. In Israel, the judge in such cases, most often a military court judge, virtually never sides with the detainee.

As the highly knowledgeable Sam Bahour comments, ironically, “It is noteworthy that the British introduced Administrative Detention during the Mandate period (British Mandate 1945 Defence (Emergency) Regulations) to punish Jewish gangs. Israeli legal experts were outraged – that is, until Israel became a state, and then Israel then adopted the practice to detain Palestinians in Israel through 1966, and then post-1967 in the West Bank when it came under Israeli control. It’s all based on “secret evidence” that the detainee and their attorney never have access to.”

Dear reader, I certainly do not imagine for a single moment that my blog post alone could spark a wider movement to end arbitrary detentions of innocent Palestinians by Israeli authorities. But the urgency has increased since the latest elections. Indeed, under the incoming Netanyahu-led, far-right Israeli government, starting in January 2023 the net will apparently be cast wider to include more Palestinians and, in all likelihood, based on public statements by right-wing figures, to include Israeli Jewish human rights defenders, too. If this blog post lands me in administrative detention later on, at least I’ll be in excellent company. And maybe if there’s enough right-wing overreach, the world will finally have had enough and the tide will turn.

Below is a summary of the case of Jamal Niser drawing on reliable published sources as provided to me by ePalestine.ps.

Timeline. In June 2021, Palestinian-American businessman Jamal Niser, a senior citizen approaching 80 years of age, was arrested and detained by Israel for four months. Numerous Israeli jeeps were on scene as more than a dozen soldiers woke him up in the middle of the night and hauled him away. No consideration was given to his being a diabetic and having lost more than half his eyesight. No charges were ever brought forward. He was released on October 9, 2021.

Then, in early August 2022, he received a call from the occupation authorities. He was offered a choice: Come to the Israeli prison so we can interrogate you or Israeli soldiers will return and arrest you from your home in Al-Bireh, yet again. Jamal told them that there was no need to scare the neighbors again in the middle of the night. He voluntarily went to the Ofer Detention Center on the outskirts of Ramallah and was interrogated for an hour or so and then dismissed.

On August 24, 2022, the nighttime raid on his home was reprised. At around 4 AM, Israeli soldiers broke down the front door of his house and went upstairs to find him and his wife in bed. Jamal was hauled away in a jeep and 3 days later given another four months of administrative detention. Again, no charges. His attorney appealed and was able to get the four months reduced to two months.

Recently (October 2022), he was informed that the Israeli military judge’s ruling was overruled by Israeli security forces and the two months that were originally reduced were added back to his detention period. He was scheduled for release from this second administrative detention on December 22, 2022; however, on December 20, 2022, he was informed by the prison authorities that his detention was being extended another four months.

Jamal Niser is an American citizen. He spent more than forty years in exile in Ohio before first attempting to return home to Palestine in 1995, after the Oslo Accords were signed. He was denied entry by Israel and returned to the US. He tried to come back to Palestine again a few years later and was able to enter and subsequently gained West Bank residency (which is granted, or denied, by Israel). Then in 2012 when he attempted to make one of his frequent visits back to Ohio to oversee his businesses, he was denied exit from the West Bank. Multiple lawyers were unable to help. Next came the arrests and administrative detentions.

Dear reader… This is not inherently a Hanukkah story — but we could make it one. I ask that you add your voice to the effort to free Jamal Niser immediately. Absent corrective action by the Israeli authorities now, another few months will pass before he finally gets home again – unless the detention is further extended. Jewish values – human values – demand that he be home with his family tonight. Hanukkah is a good time for lighting another candle against the dark. Please speak out.

About the Author
A native New Yorker, by profession a writer, editor, and translator, my passion after nearly forty years in Israel/Palestine is to explore how we might craft a better shared future by discarding the paradigm of enemies – an obsolete social design, now highly toxic. Read more in my book, No More Enemies, available on my website or from online booksellers.
Related Topics
Related Posts
Deb Reich