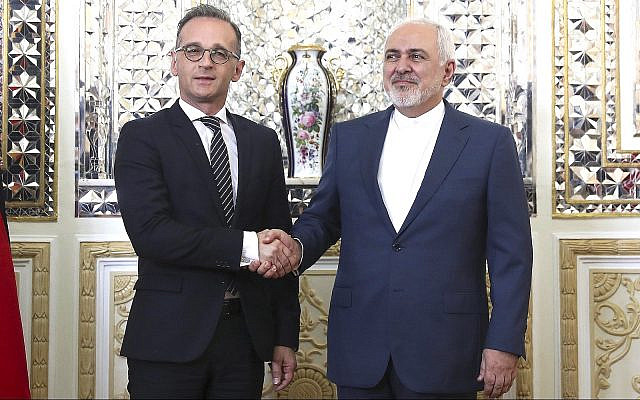 It’s not every day that the foreign minister of Germany places an op-ed in Hebrew in a popular Israeli newspaper, but that was the case on Yom Hashoah, when you addressed the Israeli public on the pages of Yisrael Hayom, arguably the Hebrew language daily with the largest circulation. You expressed your commitment to preserving the memory of the Holocaust, and the concern we all share about how to present the testimonies and history of the Shoah in a “modern” manner, one that will ensure that millennials and future generations will not only learn the historical facts, but will also internalize the important lessons of this unique tragedy.”

But what are those lessons? You mention the fight against anti-Semitism and correctly refer to anti-Semitism in the guise of anti-Zionism, both of which are undoubtedly important, but your fine words call for a practical course of action, one that Germany has failed to follow since you became Foreign Minister in March 2018.

You write that the essence of memory today is “to identify with the victims and display courage in the face of the perpetrators,” but has that been German foreign policy under your tenure as foreign minister? You need no introduction to yesterday’s victims, and it is not very hard to identify today’s perpetrators: The only good thing about fundamentalists is that they are not shy about their ideological principles. The Islamic Republic of Iran openly speaks about destroying the Jewish state, the only Jewish state, and the country that has provided a home for hundreds of thousands of survivors and their descendants.

Simon Wiesenthal, my mentor and the person for whom our organization is named, often shared, in his public lectures, his experiences as a young architecture student in Prague in the mid-thirties. He and his fellow students would mock Hitler as a buffoon and downplay the threat he posed. The conclusion is obvious and applicable today as well. When Iranian Supreme Leader Ayatollah Ali Khamenei calls Israel a “cancerous tumor” that “must be eradicated” we take it seriously.

One would assume that those threats alone would be sufficient for Germany to cut off diplomatic relations with the mullahs and suspend all diplomatic and commercial ties with those who threaten Israel with genocide. But contrary to all logic, Germany continues to maintain relations with Iran and instead of strengthening the American sanctions against the major exporter of terror and mayhem all over the globe, it has persistently sought means to circumvent the sanctions.

Since you became Foreign Minister, instead of unequivocally supporting Israel at the United Nations, Germany has consistently voted against us time after time. If Iran and its proxies held dear the European Union values that are ostensibly so important to Germany, your policies might be more understandable. But nothing could be farther from the truth. Democracy? Human rights? Women’s rights? Gay rights? Our enemies are models of the consistent abuse of such values.

To be honest, if someone had told me in early 2018 this would be the case with you at the helm at the Foreign Ministry, I would have refused to believe it. For several years, I had been following your meteoric rise to prominence in Germany. It started in fall 2014, when the Wiesenthal Center contacted you in your capacity as Justice Minister. We had identified a serious problem in the efforts of the Federal Republic to facilitate the prosecution of an important category of Nazi war criminals.

While Germany had taken steps to enable the conviction of camp guards — a change that facilitated the conviction of Sobibor death camp guard Ivan Demjanjuk and the opening of investigations against others who played similar roles in death camps and other notorious concentration camps — the new laws left out cases against those who served in the Einsatzgruppen. These mobile killing units operated in the areas which were then part of the Soviet Union, and murdered approximately 1,500,000 Jews during the years 1941-1943.

Our protestations regarding this omission fell on deaf ears for some years until we contacted you on the matter. Based on our information, and with your assistance, investigations were finally launched against three individuals from Einsatzgruppe C suspected of participation in the mass murders at Babi Yar, outside Kiev, the largest massacre in the history of the Holocaust. It was about the same time that I learned of your famous quote in which you said you entered politics “because of Auschwitz,” a statement that deeply impressed me.

Under the current circumstances, however, I find it difficult to take the words of your message to us seriously. After all, since becoming Germany’s Foreign Minister, you have been uniquely positioned to implement your guiding principle. Thus far, you have failed to rise to the challenge.