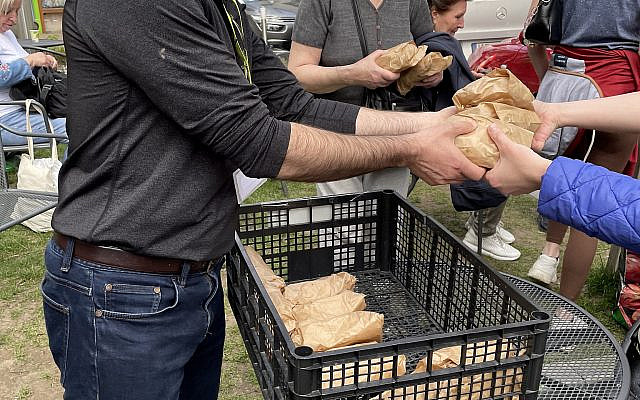 Handing out sandwiches to Ukrainian refugees

It’s been another impactful week for The Abraham Global Peace Initiative’s World Action programs. As we moved from last week’s Yom HaShoah commemoration, to Yom HaZikaron and then to Israel’s 74th Yom Ha’atzmout, emotions ran high in the Jewish world – especially with last night’s outrageous terrorist attack in which three Israelis were murdered in cold-blood. Sadly, three more terror victims now need to be added to Israel’s annual remembrance day tally of 28,284 fallen soldiers and victims of terror.

We transitioned fast from these days and flew to Krakow, Poland where along with Brahm Siegel, AGPI’s Co-Chair of its Lawyers Division and his son Cai, we are now spending a few days volunteering and providing humanitarian relief to Ukrainian refugees. I can tell you its truly heartbreaking to see families line up for food and essentials. This morning, we handed out sandwiches in the courtyard and it was emotional to see that many of the people there were hungry.

We cannot close our eyes to the plight of others. We cannot turn away. From time immemorial, on many occasions, we sought asylum, safety and most significantly, freedom. When others are suffering, we are suffering. That is our burden. To free ourselves from an impoverished and meaningless life, it is humanity’s metaphysical path to rise above this bondage, which incapacitates us. We have an obligation to remember and recall our oppression and to strive to make the world a better place. As Maya Angelo surmised, “none of us can be free unless all of us are free.”

And so, we find ourselves in this place where innocent victims of war are reaching out for help. We see children coming out of the food distribution centre with teddy bears in one hand and shopping bags full of food in the other. Their future uncertain, but with kindness and compassion, they might one day remember and pay it forward. Russia may be relentlessly pounding their homes just across the border. But here in Krakow and elsewhere along Ukraine’s borders, kindness and compassion is outshining hate and evil.
Sometimes, when there is no other way, the battle for freedom from tyranny requires action. To this vital lesson, Martin Luther King Jr. said, “freedom is not given voluntarily from the oppressor, it must be demanded by the oppressed.” In this we are required to speak out and take action when those who are oppressed cannot. We are obligated to feed the hungry, give a place at our table to the needy and elderly and extend our hand whenever possible. Action speaks louder than words and so we are here. Still, the line up outside the JCC keeps growing.
We celebrated Yom Ha’atzmout with intention: to dedicate ourselves to aiding Ukrainians on behalf of Israel. But last night’s terror attack in Israel dampened our mood and only proved that we must double our effort to tip the scale of hate and intolerance toward kindness and compassion. As an organization, we immediately denounced the horrific Palestinian terror attack in which 3 Israelis were murdered in cold blood in the city of Elad in central Israel. We call upon the Palestinian Authority to condemn the attack and denounce Hamas for having applauded the murders.
At home, AGPI clarified statements made by Patrick Brown who is the Mayor and a Conservative leadership candidate. Mayor Brown attested that the media’s portrayal of his comments were inaccurate concerning a comparison between what is happening in Ukraine to the Palestinians. The mayor said that he did not draw such comparisons and said he has always stood up against antisemitism and in defense of the State of Israel. On the status of Jerusalem, we expressed to the mayor that the Jewish community would be disappointed in a Conservative platform that would not recognize Jerusalem as Israel’s Capital City by relocating Canada’s embassy there.
It seems politicians say what they want these days with little impunity. We condemned Russia’s Foreign Minister, Sergei Lavrov for accusing Israel of backing Nazis and for distorting the Holocaust further by saying that Hitler had Jewish blood. Lavrov went even as far as saying that some of the worst antisemites are Jewish. Israel’s Foreign Minister Yair Lapid called the comments both unforgivable and outrageous. Even while Israel’s Prime Minister Bennett said President Putin apologized, does this make any difference all things considered? In Canada, we reinforced comments made by Senator Leo Housakos in the Senate calling on the removal of an alleged PFLP operative who is living in Canada.
In all this, there are proud moments. This week, we announced that one of our guest speakers at our upcoming Crystal Ball Benefit is Karoline Edtstadler, the Austrian Federal Minister for the EU and Constitution at the Federal Chancellery. The minister has been outspoken against antisemitism and has been involved and aligned with Holocaust memorialization. We are proud of this important connection and relationship and as importantly the community’s exceptional support of our local and global efforts to protect our future and defend our past.
About the Author
Avi Abraham Benlolo is the Founder and Chairman of The Abraham Global Peace Initiative (AGPI) He has been described as the nation's most prominent and noted expert in Holocaust studies, in countering Antisemitism and promoting human rights.
Related Topics
Related Posts
Comments