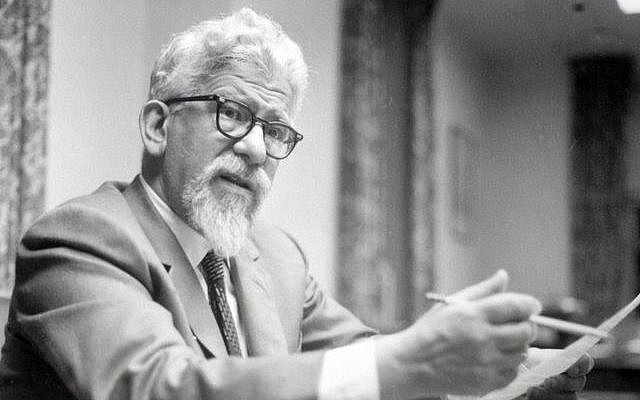 Abraham Joshua Heschel
Rabbi Heschel did not hesitate to speak truth to power. The pleasing catchphrase for which he is often quoted and meme-d, The hour calls for moral grandeur and spiritual audacity, came as part of a much more confrontational telegram to President Kennedy on June 16, 1963. It was sent a few months following a special conference called to address racism in America and just weeks before the famous March on Washington, and his words seethed with impatience and prophetic wrath.

Here is the text (bold is mine):

I look forward to privilege of being present at meeting tomorrow. Likelihood exists that Negro problem will be like the weather. Everybody talks about it but nobody does anything about it. Please demand of religious leaders personal involvement not just solemn declaration. We forfeit the right to worship God as long as we continue to humiliate Negroes. Church synagogue have failed. They must repent. Ask of religious leaders to call for national repentance and personal sacrifice. Let religious leaders donate one month’s salary toward fund for Negro housing and education. I propose that you Mr. President declare state of moral emergency. A Marshall plan for aid to Negroes is becoming a necessity. The hour calls for moral grandeur and spiritual audacity.

I could not help but think of Heschel’s telegram as I read through this tweet-thread by an outspoken pastor in Massachusetts, who took on a Heschelian posture following the shocking injury to Buffalo Bills’ safety Damar Hamlin last Monday night. Thankfully, Hamlin’s condition has improved dramatically since then, but when she wrote this, millions of Americans were still watching the horror unfold before their eyes (24 million were watching the actual broadcast, the largest number ever for Monday Night Football on ESPN).

I admit to being a more-than-casual fan who would have trouble giving up football. But Everett’s comments, which I read as I watched the player continue to lie prone on the field, gave me pause. It should be noted that the game was not resumed, as Everett (and I) believed would happen at that time. The NFL thankfully did not go that macho route, which would have been foolhardy. Grown men were allowed to cry and the world did not come to an end.

But routinely, NFL games continue even as players are being carted off with life-altering (and sometimes life-threatening) injuries. For we fans, those moments are usually a good opportunity for a quick bathroom break, or a chance to zap some nachos. Catastrophic injury has been woven into the banal routine of sports viewing.

No one grabbed for the nachos last Monday. And those who did out of Pavlovian habit, had to wonder, at least for a millisecond, What am I doing??

As the games now go on this weekend, it will be hard for the narrative not to switch back to a cliched, football-centric “Win one for Damar!” as Rev Everett predicted it would in her tweets. Team spirit is all well and good, but the seriousness of what millions saw unfold before their eyes should not be allowed to be reduced to a motivational morality play. “Win one for the Gipper” has seen its day and that day is not now.

I also hope that God won’t be thrust to center stage here. I know that has already happened. But we need to bring religion into this with the same degree of care that the paramedics used in strapping Hamlin onto the stretcher last week, and with a modicum of humility. While I have no idea whether the prayers of millions helped save this one life (as opposed to the heroic work of a few emergency medical staffers), I would not want this incident to be wrapped around the flag of football’s righteous brotherhood or Buffalo’s postseason aspirations. God does not want to reward the Bills for their suffering – otherwise Scott Norwood’s kick never would have gone wide right in the Super Bowl. God had nothing to do with that – and this, at least as far as I know.

But what haunts me most right now – now that the most dangerous time seems to have passed for Hamlin – is Everett’s comment about the NFL being “blood sport” and Heschel’s blunt assertions on the failure of political and religious institutions to honestly address racism in America. Numerous questions spring to mind:

Hamlin’s injury can be tossed off as much more freakish than the more common football injuries that are now on the upswing, involving the brain, spine, hamstring and just about every body part. But that brings little comfort, as the memory loss seem contagious, numbing the spectator’s recollection of these episodes, nearly as much as the “dinged” participant’s. We quickly move on to the next rushed commercial as yet another player is carted off to the “blue tent,” a purgatory-like place where he can be out of sight and out of mind. We’ll get an update from a sideline reporter, which will help us to adjust our betting prospects and fantasy schemes, when instead, each late hit should slap our souls, and not only when the victim is on our team. Is our willingness to look the other way increasing as intensively as the severity of those injuries we choose to ignore?

Ultimately, all the questions boil down to this:

Are we placing people in grave danger – much graver than we realized – just so we can enjoy some popcorn, while away a weekend afternoon and perhaps make a few bucks? Is the primary problem racism, boredom or greed?

Last Monday night, America could no longer look the other way. Rabbi Heschel reminds us what’s at stake. This hour calls for moral grandeur and spiritual audacity, and we must ask the same question that Heschel had the chutzpah to ask the President of the United States, a president who desperately wanted to keep King from marching on Washington, who wanted the problem to go away. JFK never placed racism at the top of his agenda, until King’s moral message got through, with the help of Heschel’s telegram and a landmark speech that Heschel gave at the prior conference.

And so I ask, as Rabbi Heschel asked, have we religious leaders forfeited the right to worship God because we’ve knowingly, and with intent, brought pain and humiliation to fellow human beings?

I don’t know the answer to any of these questions, but I feel compelled to pose them because I’m shaken. I’m actually inclined to believe that at its root, the problem is not racism at all, because for most of us, the players aren’t even people. They are objects. This past week may have begun to change all that. I pray that it has.

I’ll still root for the Patriots on Sunday. How could I not? They’re my team. But I’m no longer sure what that means.

About the Author
Award-winning journalist, father, husband, son, friend, poodle-owner, Red Sox fan and rabbi of Temple Beth El in Stamford, CT. Author of Mensch-Marks: Life Lessons of a Human Rabbi – Wisdom for Untethered Times and "Embracing Auschwitz: Forging a Vibrant, Life-Affirming Judaism that Takes the Holocaust Seriously." His Substack column, One One Foot: A Rabbi's Journal, can be found at https://rabbijoshuahammerman.substack.com/ Rabbi Hammerman was a winner of the Simon Rockower award, the highest honor in Jewish journalism, for his 2008 columns on the Bernard Madoff case, which appeared first on his blog and then were discussed widely in the media. In 2019, he received first-prize from the Religion News Association, for excellence in commentary. Among his many published personal essays are several written for the New York Times Magazine and Washington Post. He has been featured as About.com's Conservative representative in its "Ask the Rabbi" series and as "The Jewish Ethicist," fielding questions on the New York Jewish Week's website. Rabbi Hammerman is an avid fan of the Red Sox, Patriots and all things Boston; he also loves a good, Israeli hummus. He is an active alum of Brown University, often conducting alumni interviews of prospective students. He lives in Stamford with his wife, Dr. Mara Hammerman, a psychologist. They have two grown children, Ethan and Daniel, along with Cobie, Casey and Cassidy, three standard poodles. Contact Rabbi Hammerman: rabbi@tbe.org (203) 322-6901 x 307
Related Topics
Related Posts
Joshua Hammerman