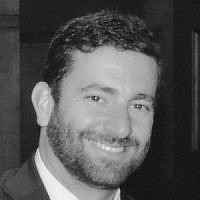 This morning I proudly voted for Hillary Clinton to be the 45th President of the United States (as I won’t be here on Election Day). I say proudly for three reasons.

First and foremost, as a dedicated and loyal United States citizen, born in and raised by the institutions of this great nation, years have passed since I allowed myself to partake in American democratic processes. My own ethical reasoning guided me – born a dual-citizen of the United States and Israel, it was inappropriate for me to partake in one of my country’s political processes when I was directly involved in the security interests of another. That’s how I felt as a soldier and officer doing my duty as an Israeli citizen, and this is how I continue to feel today when looking back.

Equally, if not more importantly, I am proud of my choice of Hillary. I know that I did my part in ensuring a clear and stable future for the country that raised me and she is the only candidate worthy of this paramount responsibility. It baffles me that Trump has made it this far, concerns me that people still follow his circus act, and frightens me to think of a future that he is President of the United States of America, Commander-in-Chief of its Armed Forces, and leader of the Free World. In good faith, I can’t say that Clinton is a model candidate, nor a model individual, when considering her various questionable behavior. Nor can I say that I agree with some policies of which she was a part. On the other hand, show me a politician who is squeaky clean, never flip-flopped on issues, and always acted in a completely agreeable way (be it personally or in terms of policy). I am not a defender of all-things-Hillary, but she is experienced, dedicated, intelligent, and a lifelong public servant. The thought that Donald Trump even has a chance is ludicrous. Trump is not only ill-equipped in terms of the task-at-hand, he is ill-equipped, at best, as far as his integrity and morality as a human-being.

Lastly, I honestly and truly do believe that America, despite its short-comings, problems, and mistakes (both past and present), is the greatest nation on earth. The future of this nation rests on these elections, perhaps more than any other in recent history. As a college professor of mine once told me, the United States of America is a unique and unfolding experiment, the likes of which has never been seen. No country has done more for humanity and the greater good than the United States, while no country has been as introspective and self-critical in its upward and forward vector, than this one. Of course this can be argued as subjective, but confident in my understanding of American and world histories, as well as the forces that shape them, I stand by these statements.

America is great – so ‘making it great again,’ is redundant and only implies that we aren’t. But yes, for America to retain greatness, the American people and its leaders will need to work hard and collectively to overcome its many challenges, old and new alike.

Reading the papers, following the elections, and discussing with friends and colleagues – it’s clear that Americans who identify with either side of the aisle (or neither) are tired of the status-quo. In fact, I’m also one of them – but, now is not the time for a protest-vote. The stakes are high. Too high, even. For those who don’t like Clinton, I can only suggest getting it together for 2020 and forgoing a dangerous act in 2016.