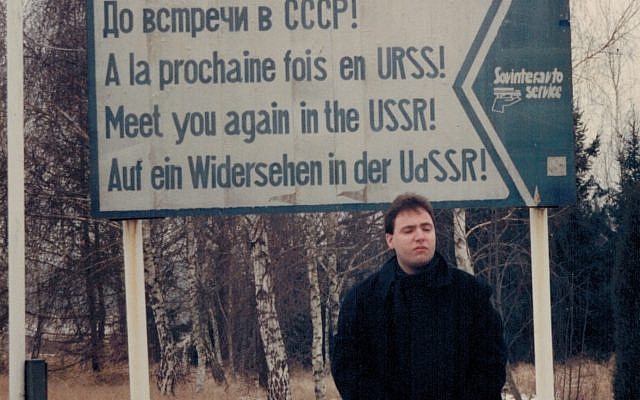 When should a country exist? How is it defined? What are its powers? Such questions resurface as the world observes with impotent jitters the crisis manufactured by Russia over Ukraine. It has implications for Israel as well.

I was there, in cities like Czernowitz, Lvov and Kishinev, in the cool days of late summer 1991, when Ukraine and neighboring Moldova declared independence. Euphoria was so palpable in the streets that one was left in no doubt: the politest way to put it was that people wanted independence from the Soviet Union.

One young person we met insisted on gifting me an LP recording of Paul McCartney’s iconic concert in the USSR. It was a prized possession and his eyes gleamed as he insisted that I take the unwieldy thing. A manifestation of appreciation toward the West that I carry with me still.

Elsewhere I was moved to discover the still-living remnants of once-vibrant Jewish life. A Yiddish scholar here, a synagogue custodian there. They were a little suspicious of Ukrainian nationalism; but the Soviet Union had become so corrupt, decrepit, dysfunctional and awful that they too, to be sure, were happy to be free.

It was a moment when something happened that seemed so just that it confused people into thinking that a new era was at hand, in which justice was routine. The end of history, in the artful words of Francis Fukuyama.

But the end of history did not come – rather a parade of horrors  from Yugoslavia to Iraq to Darfur and far beyond – and here we are today. Many think what is happening, as Putin surrounds Ukraine with troops and fears of an invasion mount, is a Russian gambit to change the world order (the US-built post-war order that the US was itself weirdly challenging under Donald Trump). More reasonable is that Russia wants to reorganize the regional order in what it calls its “near abroad.”

That is the first larger issue I see at play – the right of a country to claim a zone of influence, as some occasionally do when their britches grow very big. Sometimes it is understood and accepted, if the demanding country is powerful enough, militarily or economically. So it was with Pax Americana in the Western Hemisphere, for a while.  The Soviet Union was in effect a formalization of such a thing, for a while.

Russia  stayed more or less quiet after the collapse of the Soviet Union, but this is obviously changing.  Putin appears to be testing whether Russia can restore a zone of influence. Some people would deny Russia that right, but Russians, not just Putin but many Russians, still demand it.

Which brings us to the second point: NATO.

Russians would like for the West to accept that for Ukraine to be in NATO is as ridiculous as Mexico being in the Warsaw Pact.  I am not so sure that the NATO nations fully thought out their offer in principle of membership to Ukraine, which was made at the Bucharest Summit of 2008. I am far from certain that the people of the 30 NATO member nations are prepared to go to war with Russia, which under Article V (which says an attack on one is an attack on all) they would have to do if Ukraine as a member were attacked. Are Belgians prepared to fight to preserve the sanctity of Ukraine’s borders?

Which brings us to borders. Their inviolability is something of a principle in the post-war order. This sounds right, because stability is obviously important, but it ignores a major challenge: many of the post-colonial borders in Africa and elsewhere are imperfect, and some are nonsensical.

So it is in the former Soviet Union. Internal borders were often designed to so as to mix populations and cause trouble. This is the case not only in eastern Ukraine, where unlike many of the places I visited in the western side there are pockets with an ethnic Russian (or Russian-speaking) majority. It is also true in an opposite direction: a strip of Ukrainian territory actually populated by Ukrainians – trans-Dniestria –  was tacked onto Moldova to make it less ethnic Romanian; the result there has been simmering conflict for 30 years.

In a world of such unstable borders, the idea that NATO should constantly expand is problematic considering the profound implications of membership. Moreover, if NATO’s purpose is to contain Russia – continuing its founding mission to contain the Soviet Union – it cannot be surprising that Russia bristles.

I suspect a face-saving way out is needed, and that it may involve an inelegant comedown on NATO (the membership offer was reaffirmed last year at the Brussels Summit) while perhaps simultaneously offering Ukraine EU membership instead. That would replace defense issues with prosperity concerns and values issues, and it would be more difficult for Putin to use it as a pretext. He doesn’t need a pretext – but a pretext is always useful.

At the same time, the world must be very careful about leaving behind the narrative that a dictator was appeased. That rarely ends well, and would be terrible for the Russian people first of all: they too deserve to be free of Putin, no less than the Ukrainians do. Punishing economic and diplomatic isolation of Russia would be useful, but there are challenges: Europe is dependent on Russian gas,  and America is distracted by its grim domestic meltdown.

The third issue on the table is almost philosophical. Who has the right to be a nation?  Self-determination is a wonderful principle but realpolitik and geostrategy usually prevail. Sure, Ukraine is a nation different from Russia, probably about the same as Portugal is a nation different from Spain. But not every group of people that feels they are a nation, or even can persuasively project nationhood, actually has a nation-state. The Kurds don’t. The Catalans don’t. The Uighurs sure don’t. The Chechens don’t – it is Russia itself that has been allowed to trample them at will. It comes down to whether the claimant nation or the denier nations can exercise more power.

The Ukrainians seem to have won a right to be a nation. But there is still uncertainty about whether Russia will not be allowed to in various ways meddle in their affairs. And their borders might not be sacrosanct, as the world showed by reacting meekly to the takeover by Russia of Crimea in 2014.

The question for Israel, of course, is how the world ultimately views Palestine. Many Israelis assume it doesn’t care, and welcome this. But these things can cut both ways: if no one gives a damn what the hell goes on around here, if everything is a transaction, if the jungle always rules, it may not turn out all that well for the Jews. 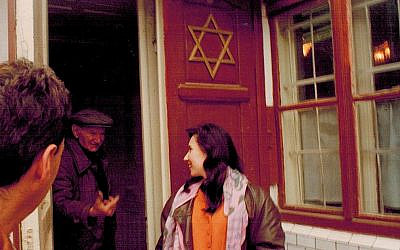 A welcoming synagogue custodian in Czernowitz (Dan Perry photo)
About the Author
Dan Perry is the former Cairo-based Middle East editor and London-based Europe/Africa editor of the Associated Press, served as chairman of the Foreign Press Association in Jerusalem, and authored two books about Israel. A technologist by education, he is the Chief Business Development Officer of the adtech company Engageya and Managing Partner of the award-winning communications firm Thunder11. His Substack, Ask Questions Later, is available for subscribers at https://danperry.substack.com/. Also follow him at twitter.com/perry_dan; www.linkedin.com/in/danperry1; www.instagram.com/danperry63; www.facebook.com/DanPerryWriter/; and https://muckrack.com/dan_perry
Related Topics
Related Posts
Comments