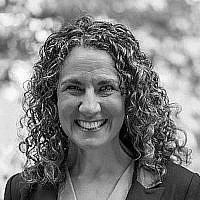 The Blogs
Rachel Jacoby Rosenfield
Apply for a Blog
Advertisement
Please note that the posts on The Blogs are contributed by third parties. The opinions, facts and any media content in them are presented solely by the authors, and neither The Times of Israel nor its partners assume any responsibility for them. Please contact us in case of abuse. In case of abuse,
Report this post.

On April 27th, the Shalom Hartman Institute of North America hosted its second annual Global Hitkansut gathering, a participatory commemoration of the Holocaust which poignantly weaves survivor testimonies, literary texts, music, poetry, and prayer into a ritual of remembrance.

“Hitkansut” translates as “convergence,” yet this English word does not easily capture the layered elegance of the original Hebrew. A verb in the reflexive form, Hitkansut beckons us to gather not only with one another but also into ourselves, our memories, family histories, and epigenetic inheritances.

In 2016, in Jerusalem, on the eve of Yom HaShoah, members of the community gathered at the Hartman Institute for a memory circle designed to commemorate those who perished during the Shoah. Participants read a “Haggadah for Holocaust Remembrance Day,” which was composed especially for the ceremony weaving together testimonies, discussion, prayer, song, and moments of silent contemplation. The voices of those who perished and survivors, and of generations who remember from different views, were spread across each of the pages of the Haggadah — to which the participants added their voices, memories, and thoughts as a multifaceted expression of the same destiny and responsibility.

Hitkansut has become a fixture of Yom HaShoah in Israel, observed in synagogues, local communities, schools, and beyond. Watching the power of this meaningful new ritual in Israel made it clear how much it was needed in North America. In 2021, the Hartman Institute’s North American team introduced Hitkansut.

Creating a North American version of Hitkansut was not merely a translation, but a peoplehood project, an opportunity to create a new and shared ritual framework for the memory of the Shoah that quite literally, gathers us together. With fewer Shoah survivors in our midst to share their own stories, the responsibility to remember becomes a collective participatory endeavor. Together, we listen to the voices of the past while drawing on our memories, associations, and understandings in the present.

Like the Passover seder, the Hitkansut Haggadah and ritual follow a proscribed order that takes us on a journey from kinah to kimah, from sitting in grief to rising to insist on human dignity. Much of the core text of the ritual was composed by Israeli poet Michal Govrin, herself the daughter of a survivor. Much like a seder, the ritual only comes to life when the communities who perform it add their voices, memories, songs, artifacts, and texts.

The Global Seder Hitkansut ceremony will open the Hartman Institute’s Yom HaShoah observance on April 27th. It continues April 28th with a virtual conference on Jewish Memory and This Moral Moment, reflecting on the legacy of the Holocaust during the Ukraine war and refugee crisis.

About the Author
Rachel Jacoby Rosenfield is Executive Vice President at the Shalom Hartman Institute of North America, where she leads the staff, shapes the vision, strategy and growth, develops the culture, and oversees programs and operations. Rachel lives in Riverdale, NY with her husband Paul and has two grown children.
Related Topics
Related Posts
Comments