The dust may be settled after the Israeli government’s shameful cancellation of egalitarian prayer at the Western Wall, but bewilderment among Jewish communities around the world remains. Those who love Israel but hate the rejection of women’s participation in Judaism and the discrimination against Jewish pluralism that this government has embraced need a new strategy. To win this fight: don’t disengage; do empower your allies in Israel.

Israel’s government is dismissive of fundamental freedoms of religion and past commitments to Jewish pluralism because the forces of non-Orthodox Judaism — primarily Conservative (Masorti) and Reform Judaism — are invisible politically. If there were 800 active Conservative congregations in Israel today rather than the 80 operating today, the community would wield significantly more power and could not be ignored.

It’s not that the Conservative and Reform movements in Israel don’t exist. Indeed, in a recent survey by the Israeli Institute for Democracy, 7.1 percent of Israelis defined themselves as either Reform or Conservative. That’s almost half a million people — twice the size that existed merely a decade ago.

But with the movements plagued by limited resources, systemic discrimination persists in all areas of religious life — from conversion to rabbinical salaries; from youth movements to synagogues that enjoy practically no government support. Consequently, this quiet revolution is happening far more slowly than it might.

As an active member of the Conservative, Shalheveth HaMacabim synagogue for more than 15 years, I have probably helped run a couple hundred bar mitzvahs of secular Israelis who never knew that there was anything but Orthodoxy on the local spiritual menu. I have seen thousands of Israeli families enchanted by the meaningful and joyful experience that a more open version of Judaism provides them. Would that we could expand these numbers geometrically, the entire dynamics of Jewish life in Israel (including the Western Wall) could change.

I asked Yizhar Hess, the thoughtful and indefatigable director of Israel’s Masorti movement what he might do if he suddenly had another $20 million in his budget. His eyes lit up. Ten new synagogues around the country could be built each year with twice that many Conservative rabbis on salary, for at least the next decade. Right now, NOAM, Israel’s USY equivalent, has a very primitive camping area in the Galilee as the local Camp Ramah. For $7 million, it could have the nicest and most compelling summer (and winter) retreat facilities in the country. Modest funding would allow the youth movement to offer hundreds of scholarships to Ethiopian and other disadvantaged youth to attend its remarkable programs, rather than the dozens it can afford today. The bar mitzvah program for special needs children could be ramped up. The Reform movement in Israel has its own wish-list which is every bit as compelling.

Ten years of support at that level would probably double or even triple the number of affiliated Israelis. The alternative of an open-minded, liberal, Jewish way of life would become mainstreamed in the country — and political influence would ensue.

There is plenty to be done politically on the American side of the pond as well. If American Jewish institutions and donors expressed their dissatisfaction by shunning politicians who shun them, they might be taken more seriously. Don’t invite them to your synagogues. And for heavens’ sake, don’t donate money to their campaigns and causes.

For instance, the Kulanu party is keeping the present government in power. While criticism of the government’s decision by some of their enlightened Knesset members like Michael Oren or Rachel Azaria is welcome, far more important is how they vote. What matters is not what they say, but what they do when the bill, sponsored by Yair Lapid’s Yeish Atid party, that would turn the mixed prayer area at the Western Wall into binding Israeli law, reaches the floor of the parliament. They need to feel that their individual decisions matter to Jews around the world.

There were many angry op-eds penned following the decision. Daniel Gordis was excoriated for a piece that sounded to some like BDS boycott advocacy, calling for Jews to stop flying El Al or stop funding Israeli hospitals. I understand his indignation, but pulling back is the wrong approach. Neither is “turning the other cheek,” never a particularly Jewish strategy. To translate the present frustration into a healthy Zionist strategy, start with David Ben Gurion’s famous line: “It doesn’t matter what the nations say — it matters what Jews do.” Let’s hit back by doing something positive.

For those who support Israel, prioritize your giving to activities and organizations that reflect the Judaism that reflects your values. Organizations like the JNF and the federations have always had wonderful Israeli projects in partnership with Conservative and Reform affiliated institutions. Let them know that the time has come to prioritize these ventures.

The greatest failing of non-Orthodox Judaism in Israel (and often around the world) is that we allow ourselves to be defined by “what we are not” and “what we oppose”. By making our principles of faith an anti-Haredi or anti-Orthodox bash, we end up playing into the hands of our opponents; we end up stereotyping and loathing our own people; most of all, we end up ceding a joyful and decent part of who we truly are. 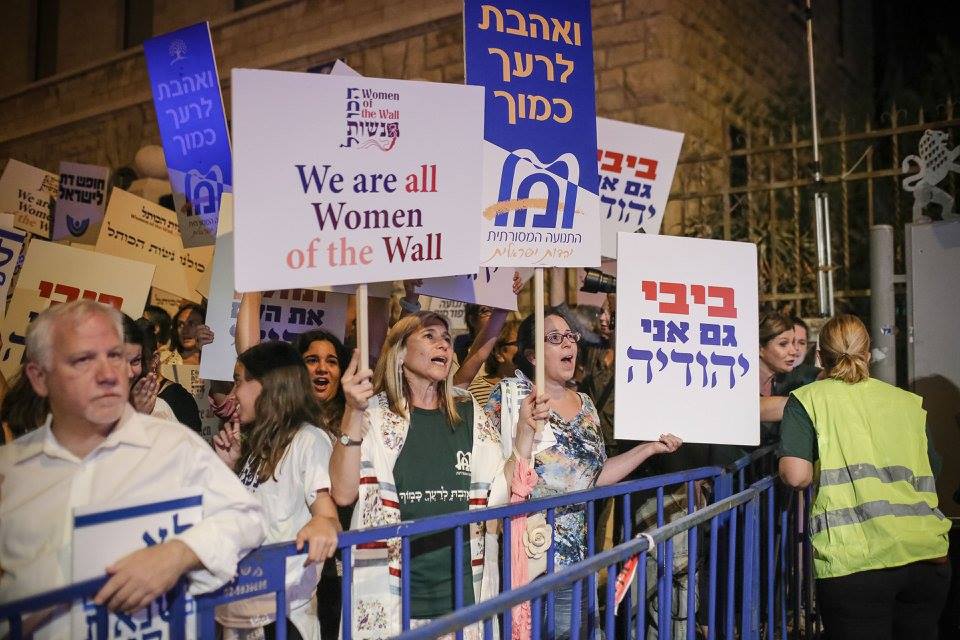 Heaven help us if the controversy over the Western Wall stokes hatred in our hearts. Then we become just like our misguided adversaries. Hillel the .Elder’s famous quote from the Mishnah is spot on: “In a place where are there no good people — try to be a good person.” That’s why I was so delighted at the 2,000-person Havdalah demonstration in front of the prime minister’s house a few weeks back. The slogan on the T-shirts donned by the Conservative-affiliated participants did not attack the government. They simply read “Love thy neighbor as thyself.”

The battle for participation at the Western Wall is symbolic. Ultimately, the site is an important historic monument. But we need to be careful lest we deify a place and start to move into the realm of idolatry. This controversy should be about ensuring that there is a holy space for creative celebration of creation and the creator — a place that is accessible to all, regardless of gender. Supporting Jewish pluralism in Israel offers a clear answer to the question of whether Judaism is to be a creed of intolerance and chauvinism or freedom and inclusion.

For too long, ensuring the strength of pluralistic Judaism in Israel has not been a priority of Israeli-oriented philanthropy. The government’s decision to ban egalitarian prayer at the Wall is ultimately a symptom of this neglect. Now more than ever, solidarity with the forces of light in Israel can change this.