The Blogs
William Echikson
Progressive Jewish Voice
Apply for a Blog
Advertisement
Please note that the posts on The Blogs are contributed by third parties. The opinions, facts and any media content in them are presented solely by the authors, and neither The Times of Israel nor its partners assume any responsibility for them. Please contact us in case of abuse. In case of abuse,
Report this post. 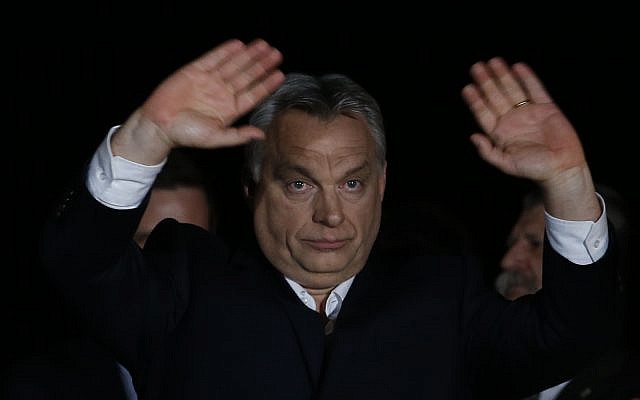 European governments are rehabilitating World War II collaborators and war criminals while minimizing their own guilt in the attempted extermination of Jews.
​
The Holocaust Remembrance Project,  a new report rating European Union countries on how they face up to their Holocaust pasts, finds Hungary, Poland, Croatia, and the Baltics are the worst offenders. Driven by feelings of victimhood and fears of accepting refugees, and often run by nationalist autocratic governments, these countries received red cards for revisionism.

Not all our findings are negative. Some European countries led by Austria, France and Romania have made important progress in confronting their dark pasts. They have accepted that their police or army, not the Nazis, played an important role in deporting Jews and Roma to their death. They are returning art to their former Jewish heirs. And, in an attempt to prevent a repetition of the Holocaust, they are working hard to educate their citizens and officials about their personal and official responsibilities to disobey illegal orders and confront evil.

Unfortunately, though, history is often being forgotten or rewritten. The Hungarian government is minimizing its country’s participation in the genocide, rehabilitating war criminals, and introducing anti-Semitic writers into the national curriculum. According to Paul Shapiro of the U.S. Holocaust Memorial Museum, the truth is that Miklos Horthy’s Hungary was the first European country after World War I to put in place numerus clausus legislation which restricted Jewish participation in high education. Hungary passed racial laws similar to Nazi Germany in 1938 and 1939. With war came the systematic theft of Jewish property and mass murder. In 1944, Hungarian police identified and concentrated the Jews, loaded them onto trains, and delivered them into the hands of German SS units for execution at Auschwitz.

Revisionism is often accompanied by a revival of Nazi-inspired hate speech. Hungary’s right-wing prime minister Viktor Orban has described the arrival of asylum seekers in Europe as “a poison”, saying his country did not want or need “a single migrant.” Jaroslaw Kaczyński, head of Poland’s governing Law and Justice Party, has warned that migrants are “parasites” that carry “very dangerous diseases long absent from Europe.” In the same vein, French right-wing extremist Marine Le Pen called for the “eradication of bacterial immigration,” proclaiming that immigration was causing an “alarming presence of contagious diseases” in France. In his Mein Kampf, Hitler repeatedly refers to Jews as parasites.

In 2018, the nationalist Polish government criminalized the term “Polish death camps.” The same government is waging an offensive on the rule of law and freedom of expression, imposing new repressive bills to control the media and attacking the independence of the country’s courts. Anger is understandable when foreigners refer to Auschwitz and other extermination camps the Nazis set up in Poland as “Polish death camps.” They were Nazi death camps. Along with three million Polish Jews, at least 1.9 million Polish gentiles were killed.

Yet many Poles were complicit in the crimes committed on their land. When a Polish minister questions Polish participation in the murder of hundreds of their Jewish neighbors during a Holocaust-era pogrom, he is wrong. Like other countries conquered by Germany, Poland too must face up to all aspects of its World War II history – without the threat of sending historians to prison. It is no surprise that a Polish nationalist government is behind the new revisionist bill. And it is notable that international and domestic criticism forced the government to dilute its original Holocaust law.

This battle over history extends beyond the questions of mere historical accuracy. It carries important implications for Europe’s present. Today’s revisionism coincides with a rise of extreme nationalist and far-right political movements dedicated to rolling back democracy, the rule of law, and its modern-day beacon, the multi-ethnic, tolerant European Union. Around Europe, the generation of Holocaust persecutors and survivors is dying out. Post-war anti-Semitic taboos are fading. Migration is bringing large numbers of Arabs harboring anti-Semitic sentiments.

Amid this heated atmosphere, memories of the Holocaust are fading. According to a CNN/ComRes survey taken in September 2018, 34 percent of Europeans surveyed said they know just a little or have never heard of the Holocaust. A third of European said Jewish people use the Holocaust to advance their own positions or goals, according to the poll, for which 7,000 people across European were surveyed.

Before joining the European Union, countries had to show that they accepted responsibility for what happened there during the wars. All recorded significant progress. These advances now are being rolled back as illiberal, nationalist governments take power. The new nationalists often believe that their ethnic group suffered as much or more as Jews. Others cannot accept that their nationalist leaders often collaborated with the Nazis and killed their Jewish neighbors.

The Romanian example is particularly telling. After years of neglect or outright rejection of any guilt for the death of the country’s Jews, the country pressed to join the European Union and NATO. Under the leadership of Romanian-born Holocaust survivor and Nobel Prize winner Elie Wiesel, the government commissioned an independent committee. It discovered and publicized the fact that at least 280,000 Romanian Jews along with other groups, were massacred in Romanian-run death camps.

Unfortunately, countries with troubled pasts such as Croatia, Bulgaria, and Poland and others have not followed this model. They should also appoint independent commissions to study their Holocaust history.

European Commission Vice-President Frans Timmermans has made Holocaust revisionism a test of member governments’ commitment to the rule of law. Holocaust survivors are dying out and at a time when anti-Semitism is on the rise, “we need to foster the memory of the darkest chapter in our history,” Timmermans says.

The present European Commission has done more to protect and promote Judaism than any of its predecessors. In speech after speech, Timmermans has underlined how only a Europe with Jews can fulfill the goal of a liberal, tolerant and multi-ethnic Europe. “There is no Europe without the Jewish community,” is the line that Timmermans repeats.

The Commission has also taken a series of important concrete actions to support these words. Timmermans has named the first-ever European coordinator against anti-Semitism. He has pressed internet companies to combat online anti-Semitism. He calls out countries for trying to rehabilitate Holocaust war criminals and minimize their own guilt. And he has unlocked millions of euros in grants to fight anti-Semitism and finance interfaith initiatives.

Our study identifies new challenges. Germany has a growing Muslim population, with one million new migrants from Middle Eastern countries. They account for the largest group responsible for anti-Semitic incidents, according to Jewish participants in the Fundamental Rights Agency report. Will migrants adopt Germany’s values of tolerance and responsibility for its past? Our research questions whether these new arrivals are receiving sufficient education about the Holocaust.
​
European authorities have expressed a need for an independent report to press their rule-of-law campaign. I believe, too, that there needs to be a naming and shaming of poor performers – and encouragement for good performers.

About the Author
William Echikson, a founder of the International Jewish Centre of Brussels, served for three decades as a foreign correspondent in Europe for a series of US publications including the Christian Science Monitor. Wall Street Journal, Fortune and BusinessWeek. He is the author of four books, including works on the collapse of communism in Central Europe and the history of the Bordeaux wine region.
Related Topics
Related Posts
Comments