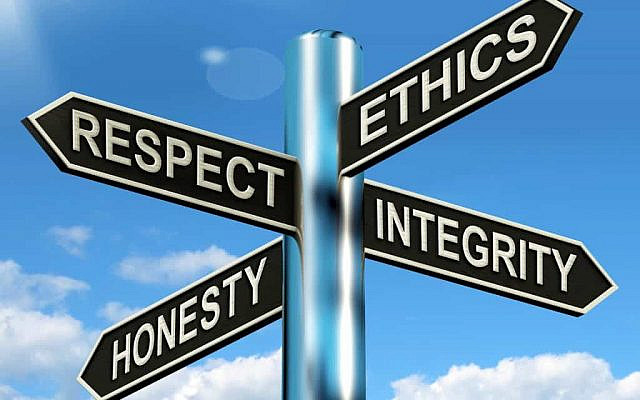 If we think back to our childhoods, most of us can agree that telling the truth was a concept that we all learned pretty early on in our development. I can still remember the Uncle Moishy songs about telling the truth and honesty. When I was caught in a lie either by my parents or my teachers, there was always a fairly serious consequence. Honesty was not something that anyone was ready to compromise on.

As an adult, the concept of honesty takes on an even greater importance, in my roles as a parent, CEO, and as an educator. I expect my children to tell the truth, and I expect the same from both my students and my colleagues. While sometimes, the truth may be difficult, I have always believed that honesty can often be the best solution to fixing any type of problem that may exist. Sure, there can be exceptions to this rule, and yes, once in a great while, maybe there is a reason to bend or to delay the truth. In 99% of the cases however, telling the truth is something that we must take seriously. It is a concept that is instilled in us from a young age, and it is a principle by which most of us try to live our lives.

This all sounds simple enough. We have all heard the phrase “honesty is the best policy.” We encourage those around us to live honest lives, and we expect the same as parents from our children. So then, if this concept is so simple, why are there so many examples of dishonesty in our lives? Why is this such a difficult concept to follow?

Sometimes, the dishonesty is not the initial goal. When things however don’t go as planned, the lies start coming, rather than owning up to the truth. A while back, I remember that there was a school which launched a new academic initiative. The idea seemed really perfect on paper. As the idea was put into place, the school discovered that it did not have all of the resources needed to carry out the plan correctly. The problem was that both students and parents were counting on this new initiative to solve a lot of other existing problems.

At this point, the school had two options. They could admit that the plan was not working as intended. This would have meant regrouping and coming up with a solid “plan B” option. It also could have meant some families leaving the school. The second option was to tell everyone that the original plan was on track and that they knew what they were doing. This was definitely what everyone wanted to hear.

The problem here is that as is the case with many lies, the truth often comes out eventually. At that point though, it becomes impossible to control, and even more importantly, impossible to easily fix the situation. In this case (a true story) the school, unfortunately chose the second option. In doing so, they perpetuated a lie to the entire school community and even more sadly, placed a lot of their students in difficult circumstances. In doing so, every principle about honestly and morality was forgotten.

In the end, the school did figure out a way forward, but by that time they had lost trust with their community and even more so, they set a terrible example for their students. This story almost sounds made up, but as many of us know, these types of narratives take place every day both in education as well as in the global working environment.

I have been the CEO of a successful company for over a decade. During this time, as with most businesses, there have been some extremely difficult and trying moments. As a manager, however, I have never knowingly lied to an employee or to a customer. I can remember a few moments where that honesty has meant swallowing my pride and owning up to a mistake, even errors which I did not personally make. There were a few times when a customer chose to take their business elsewhere and that did hurt. After all, mistakes happen and often second chances can bring better results. Other times, however, despite hurt feelings, we were able to use these instances to improve the overall working relationship. While the truth can sometimes hurt, dishonesty rarely brings a positive outcome.

As parents, educators, and entrepreneurs, we have a responsibility, not only to those around us but also to ourselves. In the business world, a person’s reputation is considered by many to be the greatest asset. In our personal lives, we must be able to look at ourselves in the mirror and feel good about what we see looking back. The truth may not always bring the desired immediate results. Hopefully though, we can learn from each experience and better ourselves every step of the way.

About the Author
Aryeh Eisenberg is the CEO and General Manager of Edu-Together, an online education technology provider for schools and individuals. Based in Israel, Edu-Together works with students all over the world.
Related Topics
Related Posts
Aryeh Eisenberg