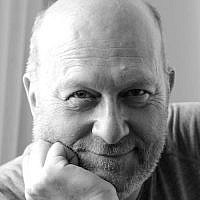 The Blogs
Ian Joseph
Apply for a Blog
Please note that the posts on The Blogs are contributed by third parties. The opinions, facts and any media content in them are presented solely by the authors, and neither The Times of Israel nor its partners assume any responsibility for them. Please contact us in case of abuse. In case of abuse,
Report this post.

I’m a South African Jew of mixed Palestinian, British and Polish stock. The descendant of Jews who lived in Polish Eastern European shtetls, Leeds in Yorkshire, the early settlement of Tel Aviv and the small port city of East London, South Africa. Katz,  Rauf, Greenberg, Kuczinski, Rozman and others are among the names of my predecessors. I’m sure some perished during the holocaust, others made their way to Palestine during the second aliya, and yet others found their way to South Africa. I have relatives buried in Leeds, Tel Aviv, Jerusalem, East London, Bialystok and Johannesburg among others.

Every time I read of an antisemitic incident, a terror attack on Jews or even an anti semitic slur, my tribal genes rebel, my memory cells kick in and I feel angry and despondent.


My cellular memory goes back further, to well over two thousand years of Jewish persecution under the church and other official bodies. The fear of persecution runs deep in our Jewish veins. Pogroms, the ghetto and other manifestations of antisemitism are only a few generations in our past. The holocaust is not even two generations away.

At the age of 12 I decided I was an atheist. But… due both to my tribal memories and cultural indoctrination, remained an active member of the South African Jewish community. Attending a Jewish Day School, King David, and becoming active within Jewish youth movements, MDA and Habonim, I was fed a constant stream of one sided information as to the justice of our cause and the righteousness of Zionism.

The mythology of the Jewish people as a tiny, noble, chosen, God-fearing minority with a special mission, constantly under threat of an overwhelming hostile world, who hate us, was fed to me with my mother’s milk.

All of this fine Jewish and Zionist education culminated in me making aliya to Israel, living on a kibbutz, serving in the IDF and studying in Jerusalem. After seven years of life in Israel, I was feeling very uncomfortable with life there and could not identify why. I left Israel in 1980.

I am able to overcome my primal tribal instincts with facts-based reason and figure out where I fit in. Furthermore I have at my disposal the internet. I can check facts, research any topic, read world news, and gain an understanding of my environment and others, both close at hand and in distant places.After leaving Israel, ostensibly for a year, I started reading voraciously and discovered that there was a side of the Israel myth that had never been presented to us. A side we had never discussed in school or at youth movement meetings. A different compelling narrative which presented both new facts and new interpretations of old facts. A revelation that founding myths were indeed myths and not facts. A surprise that there was another people who had been dispossessed of their land in order to create the Jewish state.

Many of my former friends, youth group comrades and brothers in arms have remained in Israel. They are all decent, hard working people who believe in treating their fellow human beings with respect and dignity. Those of us who took part in the Jewish Youth Movement experience all believed in social justice, the need to strive for a better world for all. Those of us who made aliya, and those who did not, fervently believed in a democratic Israel where all would receive equal treatment at the hands of a democratically elected government. We all believed that the Israel of tomorrow would be better than the Israel of today, regardless of which today it was. We all believed that the only solution to the “Jewish Problem” was Zionism and the only right place for a Jew was Eretz Yisrael.

We were young and we were idealistic. We were also ignorant. We were ignorant of the Palestinians. We knew nothing about the inhabitants before Zionism. We knew nothing of Arabs, Arabic or Arab culture. All we were told was that they wanted to kill us and that was enough for us to hear. We were ignorant of the realities of war. We thought that the Jewish soldier was noble. We thought that the Jewish soldier did not rape, pillage or kill wantonly. We knew nothing about the killing of Arab civilians, but we always heard of every Jew that was killed at the hands of Arabs.

I have no reason to doubt the sincerity and wishes for peace that my fellow friends still living in Israel express. It is not easy to live in a country with the constant fear of violence, maiming, death and war. But living with constant violence hardens one, it tends to instill in one a constant state of survival mode. It tends to suppress any feelings of empathy one may have had for others who are not a part of your tribe. It tends to make one forget ones youthful idealism, replacing it instead with the pragmatism of survival at all costs.

But I want to ask these decent people today to pause and reflect on what was actually in their hearts and minds when they were young, when they made aliya or thought of making aliya. When they dreamed of a righteous Israel that did not oppress another people.

Facts are really important here. There are two competing narratives with different sets of facts. Can they both be right? Can only one be right and one be wrong? Is it a zero sum game with only room for one right narrative and one wrong one?

I’m not asking anyone to give up their long held beliefs and cherished myths. I’m only calling on people to empathize. To stand in someone else’s shoes. To understand that there are beliefs and facts which contradict yours and there is good reason for these contradictions.

Israel today is a strong nation. It has, by far the most powerful army in the Middle East, financed, supported, supplied, armed and serviced by the only remaining superpower. It is believed to have more than 200 nuclear warheads with the ability to deliver them anywhere in the surrounding area. Israel’s economy is strong and robust placing it in an honorable position in the OECD. Israel is dynamic, innovative and in many ways a miracle of the 20th century. Despite the militarism and saber rattling of Netanyahu and others there is no existential threat to Israel. Let me repeat that, Israel does not face an existential threat from any of its near or far neighbors.

As a country acting from a position of strength, facing a much, much weaker adversary, the Palestinians, Israel is in a position to take chances for the prospects of peace.

Terror attacks are intolerable regardless of who is the perpetrator and who is the victim. And there are perpetrators of terror on both sides. The rise of the settlements and the accompanying messianism have produced Jewish fanatics who believe they were given the land by god and have the powers, the duty and the right to terrorize others into leaving. This too is an intolerable state of affairs and not the type of Israel we dreamed of living in when we were young.

After our bitter history of oppression, pogroms and especially the holocaust, an era of industrial slaughter and genocide, we should know better. But, alas, it would appear that the psychology of our past oppression has, given us the power, turned us into modern day oppressors. This too is an intolerable state of affairs and not what we dreamed of as youthful future Israeli citizens.


Jewish Israelis are materially still a lot better off as a group than Palestinians as groups, whether inside or over the Green Line. It’s a pity that not more Jews put themselves in the shoes of a menial Arab worker or unemployed person, look at how they live and how they’re treated on a daily basis and attempt to imagine how they would have felt if this were their lives. Especially those Palestinians who sit in their villages and see the thriving Israeli towns, villages and farmlands built on the ruins of the land they once owned.

We Jews and Israelis are not special. We do not deserve better treatment than other people living next to and amongst us. We are not chosen, we are not unique, we are not exceptional. We have the same DNA as any other human being, we breath the same air, we drink the same water. We have no right to treat non Jews as inferiors simply because we can. In the youth movement we never dreamed or aspired to treat any others as unequal. Yet this is the situation with the latest anti democratic act in Israel, the Nation State Law. This too is an intolerable state of affairs.

Nothing is forever. Israel has only existed for 70 years. The USA will not always be a superpower supporting Israel. Israel will not always be in a position of superior military and economic strength compared to its neighbors. Israeli Jews will not always have the upper hand when it comes to non Jewish Israelis. That is why we should support a strong Israel that reaches a settlement with its Palestinian citizens, regardless of the rhetoric that there is no partner for peace. That is nonsense and just an excuse for the stronger party not to make the effort and grant the concessions that will have to be made regarding the West Bank, Jerusalem and maybe even the Jewish nature of the state.

The old new challenge in Israel is to be pragmatic and energetic in new ways, in ways that would help undo the great injustices we and our ancestors had inflicted upon the majority of our fellow Palestinians.

We need new survival strategies, and we need to snap out of our current dream that there is time and the IDF together with the USA will always be strong enough to protect Israelis and their children.

To isolate themselves from the world, to play victim and to be aggressive is not a good strategy. While you can always kill those you deem worthy of an extrajudicial death you cannot kill their ideas and the movements they represent.

In short, Israel  has to find a new, delicate balance between assertiveness as a Jewish right and reaching out to fellow citizens; between being proud of our own, understanding the others narrative, and empathy and understanding of the other.

We all, as Jews and Israelis, have to rise beyond our self righteousness and begin a true dialogue as equals, in our own and in the national interest.

With thanks to Max du Preez who unknowingly provided the inspiration, and in some cases the words, for this essay.

About the Author
Born and educated in South Africa, a graduate of Jewish day school and Habonm Dror, Ian Joseph served in the IDF as an officer in combat units, and currently resides in Northern California. Ian holds an MBA from Shulich School of Business in Toronto and is currently semi retired. Among other pursuit Ian edits a weekly newsletter of Israeli news items.
Related Topics
Related Posts
Comments