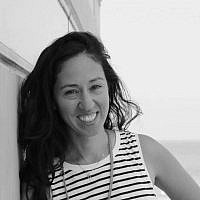 The Blogs
Tami Hay-Sagiv
Apply for a Blog
Advertisement
Please note that the posts on The Blogs are contributed by third parties. The opinions, facts and any media content in them are presented solely by the authors, and neither The Times of Israel nor its partners assume any responsibility for them. Please contact us in case of abuse. In case of abuse,
Report this post.

Over the past few weeks, we have all been following the scenes from Ukraine with concern. The sight of Ukrainian parents taking cover with their children in shelters during air raid sirens deeply resonates with us. Images of ordinary mothers and fathers being called up to the frontlines of war – and leaving their families behind – is something we in Israel are all too familiar with.

In these days of danger, our thoughts are with the Ukrainian people, and in particular the more than 500,000 children who have been forced to flee their homes in the first week of the conflict alone. It is truly heartbreaking.

As we pray for an immediate political solution to the conflict and for peace to return to Ukraine, we are also cautiously hopeful about the possibility of Israel playing a constructive role in bringing about a return to normalcy.

But when it comes to building durable peace, a political solution is oftentimes just the beginning. When the dust settles and guns are laid down, it will be up to ordinary men and women to toil at the difficult work of building an infrastructure for true and lasting peace.

In Israel we know a thing or two about this dynamic.

Every once in a while, Israel and the region are put at the center of the global media spotlight when tensions rise and violence erupts. Journalists come from all over the world to cover fighting, the rocket attacks and as was the case last May, the unprecedented riots that broke out in several of Israel’s mixed Jewish-Arab communities. But with the ceasefires, the journalists leave and moved onto their next assignments, leaving us in the region to begin the work of healing that plants the seeds for genuine, lasting peace.

At the Peres Center for Peace and Innovation, we have played a leading role in building an infrastructure of peace and cooperation. Since 1996, the Peres Center has worked to connect Israeli Jews and Arabs, and Israelis and Palestinians through people-to-people peace-building programs, based on a guiding philosophy that grassroots relationships are the basis of a better shared future.

From doctors to businesspeople, entrepreneurs and educators, we have always believed that allowing people divided by conflict to spend time together in practical, impact oriented activities is the key to fostering inclusion and laying the groundwork for shared living within Israel and lasting peace between Israel and its neighbors.

Most of all we believe in empowering the young generation to become the brave leaders of the future, and lead their communities on the path of peacebuilding. While the conflicts that impact them are created by the adults around them, the healing can be led by them – putting their futures in their own hands – for their benefit. For all of ours.

And so the Peres Center has been implementing in-depth peace educational projects since its establishment, with tens of thousands of graduates. One example is our award winning Sport in the Service of Peace programming, which unites Jewish and Arab, Israeli and Palestinian young people through football.

Implemented even during the most difficult days of wars and conflict these programs are among the longest running initiatives of their kind in the region. They unite children from different cultures, religions and backgrounds, who take to the field in matching uniforms and follow the same rules in a healthy, safe, and fun environment. These programs have a strong influence not only on the participants themselves, but also on the coaches, parents, family members, and communities.

For most of them, it is their first meaningful experience with “the other”, and as scary as it is at first, our evaluations show that it is life changing.

More than anything else perhaps, sport is a common, universal language that we can all speak – whatever our mother tongue is. As such, sport is a vital building block towards developing peaceful relationships. From the 1914 Christmas Truce with soldiers playing football, to the role that sports teams and organizations are now taking in regard to the war in Ukraine, it is clear that sport can be “a great educator for peace,” as was coined by our founder, President Shimon Peres.

The values of sportsmanship, mutual respect and conflict resolution which we impart onto our participants serve as jumping-off points for genuine relationships. We continually see our program alumni remain in touch, form lasting friendships, and take personal interest in their day-to-day lives.

These are outcomes we feel that can be extended beyond Israel.

For our friends in Ukraine, the future is uncertain. While the circumstances of the war in Ukraine and the conflict in our region are different, we do know that the ability of children to connect with each other is infectious. It is a force that can weather the challenges of war and political turmoil, and project hope across societies. As we pray for peace in Ukraine, let us also pray for children to once again be able to come together on the football pitch in safety and peace.

About the Author
Tami Hay-Sagiv is the Deputy Director General for Education at the Peres Center for Peace and Innovation.
Related Topics
Related Posts
Comments