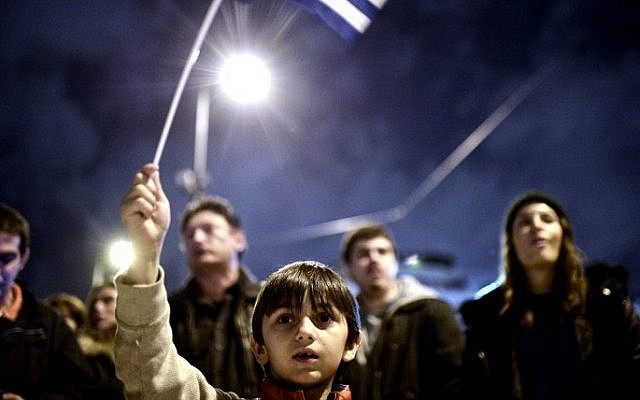 A young child waves the national flag as crowds gather in front of the Greek parliament in Athens on February 5, 2015 in support of the new anti-austerity government's efforts to renegotiate Greece's international loans (Photo credit: Louisa Gouliamaki/AFP)

When you walk into the Orange Grove in Athens, you could be at any accelerator program in the world.

There’s lots of open space, big worktables to get your startup moving, a fridge stocked with lots of good things to drink and munch on, and lots of smart people working on what might be the next big thing.

This is not just any accelerator.

It’s the first, and only accelerator in the world that is housed inside an Embassy.

Yes, the Kingdom of the Netherlands took the initiative to help the world see Greece in a whole new way by building out this wonderful facility for startups. On a recent visit to Athens, I had a chance to meet Ambassador Caspar Veldkamp, who, before coming to Greece, had the same role for four years, as the Ambassador of the Netherlands to Israel.

Ambassador Veldkamp lived and breathed startups when he was in Israel. While Orange Grove was already under way, the Ambassador brought with him a profound appreciation to the impact startups can have on an economy and its image on the global stage.

Given the Greek financial crisis, and with the support of major corporate sponsors like Heineken, Philips, and KLM, the premise was that if startups could have a place to hatch and grow, then it would not only contribute to the Greek economy, but also help entrepreneurs create new jobs for themselves — and others.

On the evening I visited, there was a pitch night; something they call The Squeeze, with some outstanding companies all competing for prize money of €15.000 for the winner.

It was a packed house with 400 people in attendance. I listened to well done pitches from companies who had very scalable and global business ideas to highly focused regional offerings. In some ways, the smaller companies intrigued me even more, because they were highly focused on serving the greater Greek community.

I am of the opinion that not every startup need be a massively scalable one. Some startups can be nice lifestyle businesses. They are the ones that produce a nice living for the owners of the company and create new jobs.

Kudos to citizens of the Kingdom of the Netherlands and your wonderful Ambassador who is helping Greek entrepreneurs have a place to land, call “home,” and contribute to Greece’s economic recovery.