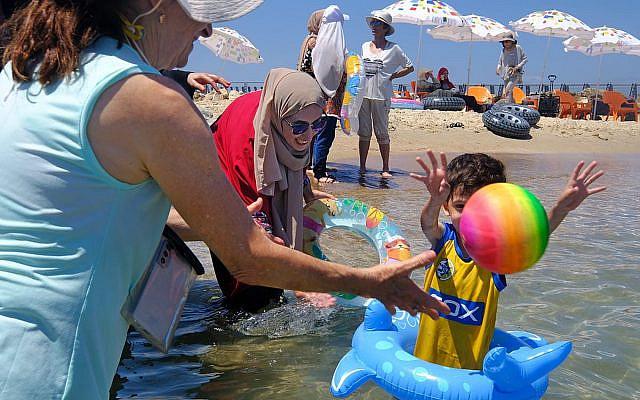 Playing in the sea for the first time! (courtesy, Orna Naor)

As I was standing in the middle of the sea, keeping my balance against the compelling, bubbling waves, I tried to keep the tears from coming. Thank goodness for my new friend standing by my side.

“You need to enjoy these beautiful moments, not think about what has brought us here.”

Of course, he was right. Etty Hillesum (1914-1943), a young Dutch Jewish woman who died in Auschwitz at the age of 29, has always been my best guide in this: “Wherever you happen to find yourself, be there with your whole heart.” Her letters and diaries illustrate her distinctive and inspiring spiritual vision.

So, I tried not to dwell on why these Palestinian mothers and their children had never seen the sea. Instead, I watched their pure amazement at the energy of the water, the way the waves came and swept them, in their rubber rings, towards the shore. I saw their initial fear turn into a love of discovery and adventure, as they tentatively (or, in the case of the young boys, wholeheartedly) headed deeper into the water. At first, they were worried about getting the strangely salty water on their faces, on their long-sleeved shirts. After a while, one after another splashed each other (I was a little guilty in initiating this!) and most of the girls and women even put their whole selves in and relaxed. When one fell or another stumbled, there was laughter instead of fear, and after an hour of absorbing all their joy, my face hurt with constant smiling.

I was scared they might think I was laughing at their innocence. But I quickly realized they understood the joy they were giving to me, because of it.

These women and children had NEVER been in the sea in their lives. They had seen it on social media, they knew about it, they knew others loved it, but they were trapped behind the wall, never able to visit it. Most of them do not even know how to swim. For three days, I’ve been trying to make a comparison. What similarity can I draw? That my parents have never been skiing? That I have never jumped out a plane? That my husband has never been to Rome?

Walking my dog yesterday evening, in the gorgeous oranges, reds, yellows, and pinks of the sunset, I tried to imagine what it would have been like for me if I had never seen the sky. The sun. Never felt its warmth. Never seen its colors.

And yet all the time knowing it was there.

Because I work for peace organizations, such as the brilliant and inspirational Women Wage Peace, whose Palestinian sister organization is Women of the Sun, and because I am actively involved in politics, I often hear people claiming all sorts of things about Israel, about Palestine, about a one-state solution, a two-state solution, and more. I often have discussions with people where they accuse Israel of being an apartheid state, and I try to explain to them how the injustice and oppression in Gaza and the West Bank do not make the whole of Israel apartheid. I regularly hear Jews telling me, “All Arabs are like this,” or Arabs telling me, “All Jews are like this.” I certainly do know there is one great similarity between the two nations: we both love a good argument!

But something another friend said really struck a chord this week. “You don’t just talk; you do.”

What a wonderful compliment.

But of course, this would not be possible without the organizations which help us “to do.” The first day in their lives these Palestinians actually managed to see the sea was only made possible by Min El Bahar, which, in its own words, “brings… Palestinian children and families from the West Bank to the coast of Tel Aviv, children and mothers who live only a few miles from the sea but have never enjoyed its waves.”

The organization is not a political one. Not even a registered charity. It relies on volunteers who want a better life for the Palestinians to become a reality by making it a reality.

I was extremely humbled to be in the presence of its leaders, kind and courageous women who devote so much time and energy to doing, not just talking.

It brings me back to that first conversation I had with my friend, as we watched everyone enter the sea for the first time in their lives. Instead of being there, making it possible, I could have been spending my time talking about how to make the future better for our children. Or even, writing about it, as I am now.

But at least now I can write about it, having done it. Perhaps by reading this, you too, with the knowledge in your heart that every single child deserves the opportunity to play at the seaside, to be a child, to live life and not be imprisoned in a regime where you only hear about people’s lives on the other side of the wall — perhaps you too will volunteer to share the happiness of these people.

And I want to leave you with this picture of a child splashing and laughing in the sea for the first time in their life.

Is there anything more wonderful than the sound of a child’s laughter?

Tell me, when we think of that, do we really want the occupation, and the separation and misery of our two nations to continue?

About the Author
Shoshana Lavan is a published author, high school teacher of English Literature and Language, teacher of English as a foreign language and most importantly, a very proud mother of her gorgeous toddler. She is an aspiring peace activist and a committed vegan. A keen runner, she adores the mountains and glorious sunshine in this wonderful country.
Related Topics
Related Posts