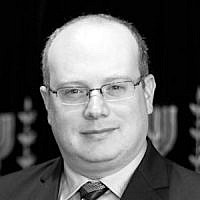 The Blogs
Oren Steinitz
Apply for a Blog
Advertisement
Please note that the posts on The Blogs are contributed by third parties. The opinions, facts and any media content in them are presented solely by the authors, and neither The Times of Israel nor its partners assume any responsibility for them. Please contact us in case of abuse. In case of abuse,
Report this post.

After several months of quarantine-related sluggishness, and in a attempt to not catch the full “COVID 19,” (pounds) I decided it was about time to get back on my indoor bike. I have long been subscribed to an online gym of sorts, an app for my phone that features a large variety of recorded workouts and exercise classes. While I was totally happy with the classes, by chance I encountered a TV ad for another app that promised phenomenal workouts which would lead to even more phenomenal results. I decided to do a little bit of research and find out if the new, popular app was indeed better than my trusty old one.

(Bear with me here, I am going somewhere with this strange intro. Promise.)

As it turns out, the difference between the two products was less to do with the quality of the instruction, but more to do with style and presentation. The app I have been using was filmed in an actual gym, located in a strip mall somewhere in San Diego. The backdrop is a fluorescent lit room, and one can see the other participants in the live class working out in the background. The trainers themselves are equally realistic – women and men in all ages, shapes and sizes are teaching the classes, some in better shape than others, but all of them seem to be having a great time. They emphasize the importance of working out for the health benefits and for the fun involved, hardly ever mentioning weight loss or appearance. I even heard some of them talk about getting ice cream after the workout…

The newer app, on the other hand, delivers a very different experience. The classes are filmed in a large, impeccably staged dark room, with the coaches highlighted by professional lighting. Likewise, the instructors themselves appear to be perfectly formed – all of them seem to be in their early to mid-twenties, minimally dressed to reveal highly sculpted, overly tan bodies, that somehow even manage to sweat photogenically. Needless to say, the emphasis is a lot less on physical and mental health, and a lot more on getting a “perfect beach body,” the same “perfect” body that the trainers all seem to possess.

While I have no evidence for this theory, my hunch would be that the newer app, the one featuring the stylized trainers and environment, is a lot more popular than the less glamorous – though more realistic – one. Most people, I believe, would rather idolize a trainer that looks like a movie star or a super model than one who looks like, well, them. Despite knowing deep down inside that we will never, ever look like those trainers, or that it is even desirable to do so, we would rather cling to an archetypal representation of a “fit individual” than acknowledge that health and fitness come in all shapes and sizes.

The same goes for “spiritual fitness.”

My mind turned to this topic after a friend sent me a screenshot of a post written by a young bride-to-be in an Israeli Facebook group dedicated to wedding planning. The young bride asked for a recommendation for – and I quote – “a Reform rabbi that looks like a real rabbi, with a beard, a hat, a black suit and everything.” That same week I received a call from a non-observant Israeli couple living in Canada, who wanted to consult with me about converting their newborn son who was born by surrogacy. They were already rejected, they told me, by every Orthodox rabbi they approached, but even though they find non-Orthodox Judaism to be “weird,” as one of them said, “I guess it is better than nothing.”

Similarly to the workout app users, who were sold a particular image of what “fitness” should look like, the bride-to-be and the young parents were sold a particular image of what “Judaism” should look like. There is a crucial difference though – the app users treat their highly sculpted instructors as role models, and essentially use the app because of the improbable aspiration that they will eventually look like them. The bride and the new parents, on the other hand, have zero interest in becoming Orthodox or even remotely observant – they just want their rare encounters with Judaism to fit the picture they have in their mind.

Why does this happen? Why are so many people so quick to hand over the keys to their Jewish identity to those whose lives are so different than their own? Even more so – to those who show nothing but contempt towards their life choices and who’s only interest is in forcing them to adhere to their particular ‘brand’ of Judaism. The bride-to-be knows that for whatever reason, no Orthodox rabbi would agree to officiate at her wedding; that they probably consider her marriage to be a heresy and cannot support her. The young parents were repeatedly told by the Orthodox establishment that their very existence is an abomination. And yet both are eagerly seeking the approval of those who showed them nothing but hate, dismissing the type of Judaism that would welcome them with open arms as, at best, a compromise.

Do these young men and women – and surveys show that there are more of them every year – secretly believe what the Orthodox establishment has been claiming? That the Jewish world is divided between the Frum and the not-yet-Frum? Do they believe deep down that they are themselves horrible sinners and are simply too weak to be Orthodox? I don’t think so. I think that they are perfectly happy with their lives, with their choice of partners, with their sexual identities, and with their own level of observance or their lack of it altogether. One can talk about the political connections between the Orthodoxy and the State of Israel, about questionable and dishonest tactics used by Orthodox and especially Ultra-Orthodox outreach organizations, and more. I do not want to do that today. The High Holy Days are a season of reflection and T’shuva – repentance, and as the Kotzker Rebbe used to say, when confessing our transgressions we should make sure to beat on our own chests rather than our neighbors’.

So what is our responsibility – “our,” meaning the non-Orthodox Jewish world – for the fact that so many of our younger people see Orthodoxy – and more often than not in its Hareidi, Ultra-Orthodox version – as the real, authentic form of Judaism and all other groups as merely a watered-down, cheap imitation of the real thing?

For starters, we stopped investing in our younger people. We somehow got used to the idea that it is perfectly normal for us not to offer anything for those who were already “bat or bar mitzvah-ed” but do not yet have children of their own. For some reason, the Reform and (especially) the Conservative movements both gradually defunded their college age programming but maintained the illusion that “the children will come back once they are ready to get married.” While we were succumbing to the idea that young people simply have no interest in religion, our college students found young, charismatic, and very well-funded Orthodox rabbis waiting for them on campus, eager to introduce them to their vibrant, warm, and tight-knit communities. While so many of our Hillel chapters became cliquey social clubs, students who were looking for a spiritual connection were often referred to the Orthodox kiruv (outreach) rabbis who were quick to invite them to Shabbat dinners with their families, to Torah classes, and retreat weekends – all for free. When our young adults moved to a new town for school or a new job, and found the local Conservative or Reform temple virtually empty on a Friday Night or a Saturday morning, they crossed the street to find a full, loud Orthodox shul, and seven different families asked them to join them for Shabbat dinner or lunch.

Which leads us to another reason – commitment. We have to admit that we have failed miserably in creating communities that are both inclusive and highly committed. While we take for granted the axiom that only a fraction of our membership shows up to services weekly (ten percent seems to be the magic number in the US), an Orthodox shul is generally as packed on a regular Shabbat as we are during the High Holy Day. Well, at least the men’s section is… Yes, there are definitely more ways to be a serious Jew than going to shul, but when looking at those who engage in Torah study, in social action, in immersing themselves in Jewish culture, in taking leadership positions in synagogues and Federations, are the numbers all that different? Let’s be honest – we’re probably still talking about ten percent, and moreover – it is often the same ten percent who do show up at weekly services!

So, a young person looking to find their place in Judaism can look at the Orthodox world and say “I may not agree with their values, but at least they practice what they preach. I may have no desire to be like them, but they sure do live their faith.” Can we honestly say that we do the same? Should we really be surprised if this version of Judaism, with all its inherent flaws and problems, is perceived by so many as the real deal?

Maybe the problem runs deeper – perhaps we convinced ourselves that taking our Judaism more seriously will magically turn us into Orthodox Jews. That a commitment to any kind of significant Jewish practice is a slippery slope into a world whose values we do not share. That Torah study does not lead to acts kindness, but to misogyny. That weekly Shabbat dinners are not a fabulous family activity, but a gateway drug leading to a rejection of science. If we have no interest in becoming Orthodox, why should we spend any time or energy on learning more about our Judaism?

But this is a false dichotomy. Exploring a more conscious, more meaningful Jewish life is not any more likely to turn us into Shtisel characters than spending thirty minutes a day on your indoor bike will turn you into a supermodel. It might, however, make us more educated about our own heritage, more at peace with our Jewish choices, more confident in our practice and maybe, just maybe, more attractive Jewish role models for the next generation.

This sermon was delivered on Yom Kippur 5782 morning at Congregation Kol Ami in Elmira, NY.