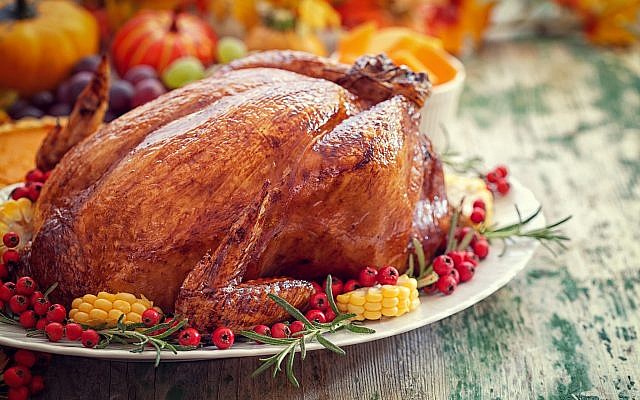 If an American holiday falls on the Jewish calendar, does it make a sound? That’s a question we American immigrants ask ourselves annually with the coming of Thanksgiving.

Ahh, Thanksgiving. That special holiday, rich with delicious foods unknown to most of humankind, commemorating a story that none of us over here can seem to remember. As an expat living in Israel, on no other day do I feel more American. No longer am I the Jewish kid in the public school cafeteria, trying to explain why my people eat a roll substitute made of “matzah farfel.” In November, I become the American immigrant who defends the practice of adding marshmallows to yams (and pumpkin spice to coffee).

And why wouldn’t you? What is Thanksgiving, if not a day to stuff your face in the presence of loved ones? That’s a question I get every year from my Israeli friends.

Me: “So the Pilgrims came to Plymouth Rock…..and they met an Indian named Squanto….although he wasn’t from India….and then they had a big feast with the Indians….and at some point, umm….I think they…kinda killed them all through genocide and disease….(long pause)….Hey, who wants cranberry sauce?!

(Under my breath) “I really need to look this up before next year.”

Anyway, who has time to explain? There’s a meal to prepare! At least for those Americans who step up to embark on a wild goose turkey chase through Israeli supermarkets. As Dorothy told Toto, we’re definitely not in Kansas anymore. At this time of year, the immigrants come out of the woodwork seeking community and shopping tips. 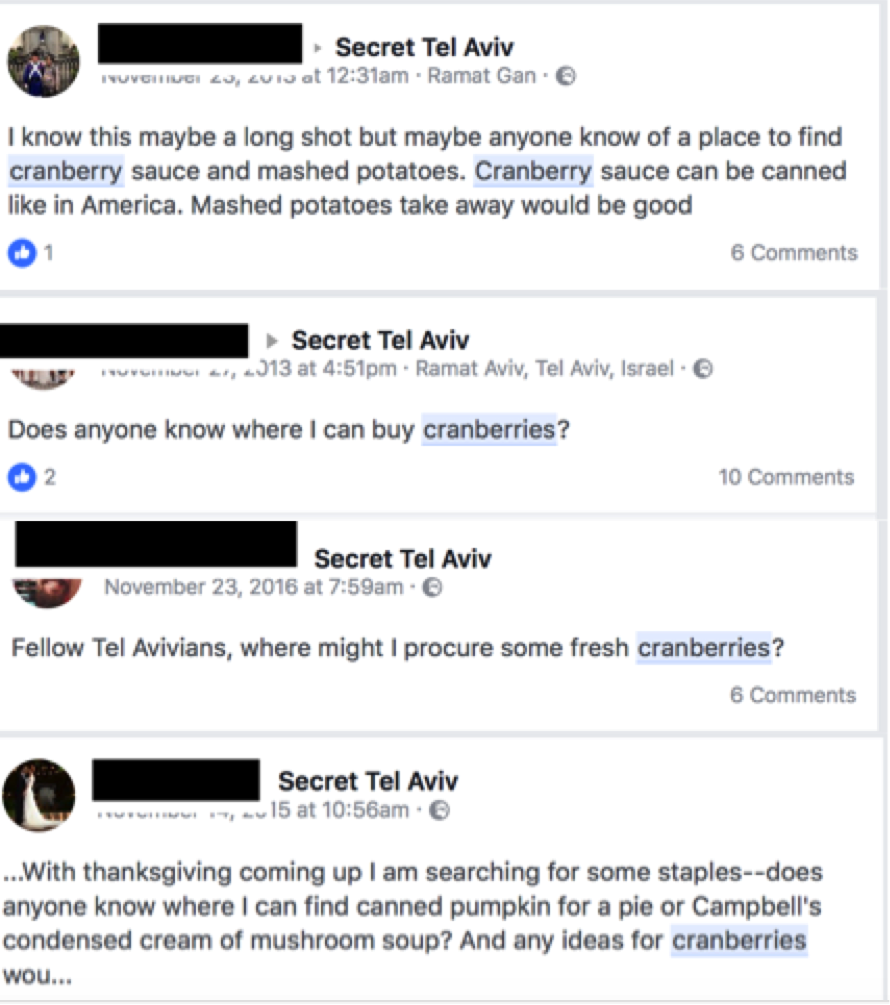 Even if the unthinkable were to happen and you weren’t to find cranberries, life would go on, right? As long as you have a turkey, which is its own adventure. Since Israelis don’t buy whole turkeys, you have to make a special request to the supermarket or butcher (a week in advance to be safe) and ask them not to cut it. You might pay 300 or 400 NIS (make sure you’re seated before converting that to dollars) AND you might even discover that your Israeli oven doesn’t fit a big bird. Hey, nobody said life was easy.

No oleh (immigrant) remains 100% American, so it’s fitting that we put our own Israeli twist on the day. Since Thanksgiving is a normal Thursday here, its proximity to the weekend means we all just push it back a day and celebrate Friday night. Voila…Shabgiving! If it’s your custom, you can begin with the traditional Sabbath prayers or if you’re the creative type, you can make up your own, like “hamotzi stuffing min ha’turkey.” (Note: To this date, no one has ever actually done this.)

Actually, Thanksgiving dinner would be more fun if we ran it like Passover Seder. You want pumpkin pie? Go find it.

A Shabbat meal is always nice, but let’s not lose focus: tonight is about the traditional holidays foods. Turkey, stuffing, green beans, pumpkin pie, and more. Which brings us back to the yams, marshmallows, and bending over backwards to explain to the locals why a country with such expensive health care would ever eat them together.

And speaking of the locals: just as our Israeli friends open their doors to us for holiday meals, it’s only fitting that we do the same and welcome them to our feast. Keep in mind that they’ll be confused and bewildered by our bizarre food combinations. So why waste them on their unappreciative palettes? Give them some oatmeal and a taco shell and they won’t know the difference. “This is our traditional food, Sivan, which our forefathers have eaten for thousands of years. Now turn to page 45 and lead us in the bracha over the 4th cup of gravy.”

Jokes aside, it’s a great time. So maybe we don’t have the Macy’s Day parade, football at a normal hour, or the proverbial crazy uncle who you only see once a year and argue politics with. This country is tiny, you can see him every weekend if you want (or send him daily texts through the family WhatsApp group).

What we do have is a few hours of camaraderie, community, and a chance to remember the traditions of where we came from and how delicious it tastes. And just remember: no matter how many carbs you ingest, you’ll burn them off running around town for cranberries.

About the Author
Since making aliyah in 2006, Benji Lovitt has performed stand-up comedy and educational programs for groups including Jewish Federations, Chabads, synagogues, Masa Israel Journey, and Birthright Israel. His perspectives on aliyah and Israeli society have been featured on Israeli TV and radio and in publications such as USA Today, Time Magazine, the BBC, and more. Benji has worked as a cross-cultural trainer with groups including the Ministry of Foreign Affairs and Masa Israel and is a popular presenter on the Limmud International circuit. During 2014's Operation Protective Edge, his humorous observations on the war led to his being called in Israel "the only reason to go on Facebook.”
Related Topics
Related Posts
Comments
Advertisement