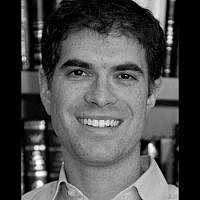 The Blogs
Yehuda Sarna
Apply for a Blog
Please note that the posts on The Blogs are contributed by third parties. The opinions, facts and any media content in them are presented solely by the authors, and neither The Times of Israel nor its partners assume any responsibility for them. Please contact us in case of abuse. In case of abuse,
Report this post.

Being the chief rabbi of a nascent Jewish community, especially in an Arab country, takes a lot of explaining. One of the people who congratulated me early on was New York Times journalist David Brooks, who often joked that being a conservative columnist at the Times was like being the Chief Rabbi of Mecca. “Mazal tov,” he said in this video clip, “from one chief rabbi to another”.

I have become accustomed to all the questions people naturally ask: How did that happen? Do they really need a chief rabbi? Who appointed you? What do you do?

Here is my story.

I received my formal semichah, rabbinic ordination, at Yeshiva University in 2004. But a different moment of ordination actually occurred during my studies, in September of 2001. I was working as a rabbinic intern at the Hebrew Institute of Riverdale, teaching Daf Yomi and organizing the early morning services. On the morning of September 12, Rabbi Avi Weiss, the Senior Rabbi, walked into shul covered in dust and ash from being at Ground Zero all night. He asked if I would come back downtown with him. I was 23 years old.

“But I am just a student. The police won’t let me through.”

“You are right,” he said. “Come with me.” We walked together to his office. He took out a piece of stationery and wrote on it, “Yehuda Sarna is a rabbi at our synagogue.” He folded it, placed it into an envelope, and handed it to me. “Now you are a rabbi. Let’s go.” 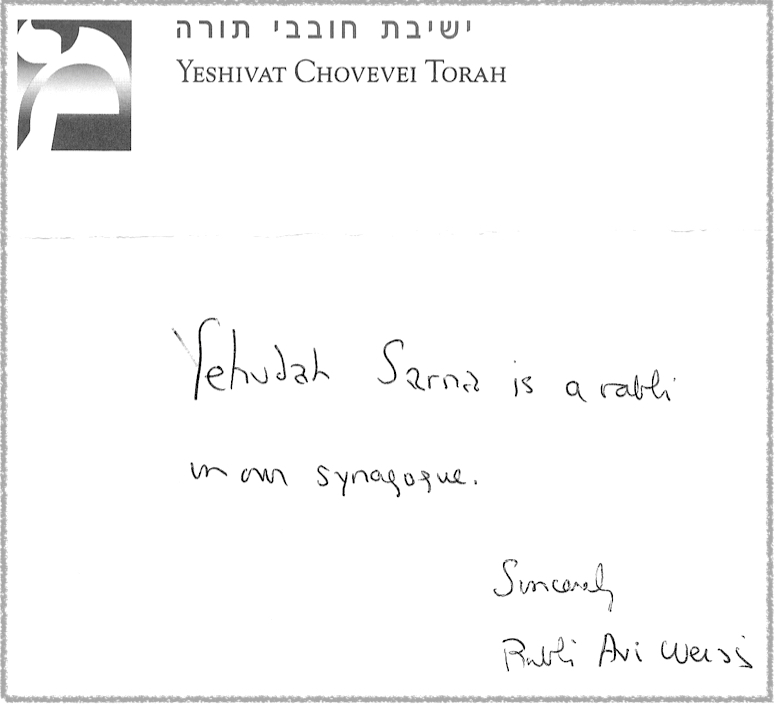 “Yehudah Sarna is a rabbi in our synagogue. Sincerely, Rabbi Avi Weiss” Detail of the note from Rabbi Avi Weiss that allowed Sarna access to Ground Zero following the 9/11 attacks. (Courtesy)

Looking at the letter now, I realize that Rabbi Weiss never dated it. In fact, it’s power is timeless.

The scenes of the rescue effort are still vivid to me. But perhaps what stuck with me most was the feeling of not having a script, of not knowing what to say as I tried to comfort and support rescue workers. So much of my learning and training had been around prescribing the right formulas, gestures or actions. Here there was no script. Perhaps that was my destiny: to be a rabbi in spaces where no script has yet been written.

In 2002, I began working at New York University’s Bronfman Center for Jewish Student Life, a Hillel affiliate. NYU was in the midst of transforming itself into a “global network university” with campuses all over the world. In 2008, John Sexton, then President of NYU, announced that Tel Aviv and Abu Dhabi would host new NYU campuses. John invited me in 2009 to come to Abu Dhabi to interview high school students looking to gain admission to NYU Abu Dhabi. I agreed, but under one condition: I am being invited as the rabbi of the university and therefore would not conceal my Jewish identity in any way.

I continued to come for “Candidate Weekends” several times a year, utilizing my time there to minister to Jewish students, staff and faculty, as well as to explore beyond the confines of the university. In 2015, I heard there was a group of Jews in Dubai, a neighboring emirate, meeting every Shabbat in local homes and I reached out to meet them.

I recall our first meeting well. I was set to give a class to the community on Hanukkah, which was to fall in the coming weeks. We discussed the proper placement of the Hanukiah. Ideally, the menorah should be outside the home, near the door, to publicize the miracle. But in a place where Jews are fearful to reveal their identity, it belongs inside. “Which is it for you?” I asked.

The twenty or so Jews in the room originated from as many countries. The responses varied. Some concealed their identity. Some were open. Some were open, but insisted that their children keep it a secret. And some were in flux.

Joining me at the class was a colleague and good friend from NYU, Imam Khalid Latif. When the conversation turned to the question of whether we could establish a dedicated place for Jewish prayer, Khalid said, “Look, we live in the United States. It is often not so easy in a post-9/11 climate to get the right zoning permits to build a mosque. A lot of people don’t want mosques built, and when they do get built, sometimes people try to burn them down. But that doesn’t mean we stop trying.”

Soon thereafter, Ross Kriel and company leased a villa to serve this exact purpose, to be the first synagogue in the UAE. I continued to advise members of the community as they navigated the path of building Jewish community in an Arab country, which became public in articles in Bloomberg and in The Times of Israel in late 2018.

The Year of Tolerance

The UAE government announced that the year 2019 would be themed “the Year of Tolerance,” headlined by an official visit by Pope Francis. His Highness Sheikh Mohammed Bin Zayed announced plans for an “Abrahamic Family House,” a multifaith campus with a church, mosque and synagogue connected to each other by gardens and an educational center. The Ministry of Tolerance published a book entitled “Celebrating Tolerance,” with chapters detailing the local histories of each religious minority in the UAE, including the Jewish community. The Jewish community was rapidly becoming visible, ready or not.’

This increased visibility, as well as the natural increase of Jews coming to the UAE from all over the world, prompted the community to draft a constitution and hold elections for leadership positions. I was asked unanimously to serve as Chief Rabbi, which I accepted in March of 2019, and subsequently received letters of endorsement and blessings from Rabbi Jonathan Sacks, Rav Shlomo Amar, and others. I thought that the bulk of the excitement of the year had passed. In fact, we were just getting started. 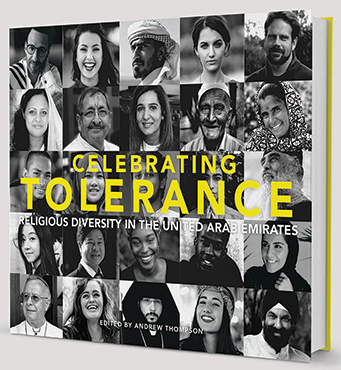 “Year of Tolerance” book produced by the UAE government. Ross Kriel, President of the Jewish Community of the Emirates, is seen in the upper left corner.

In early April, back in New York City, John Sexton asked me if I would speak at a book launch for the book “Celebrating Tolerance” at NYU moderated by the UAE Ambassador to the United Nations, Her Excellency Lana Nusseibeh. I took the opportunity to share with the audience some of the challenges the Jewish community was confronting at this stage of its growth. Lana caught me afterwards, looked me straight in the eyes, and said, “If you ever need any help, do not hesitate to call me.” I was incredulous.

I did call her and we set up a meeting. But before that meeting took place, she asked me if I would speak at a luncheon the UAE was hosting on May 2, 2019 at the UN Headquarters. The event was set to be the 50th anniversary of the Organization of Islamic Cooperation (OIC), which consists of 57 member states, constituting “the collective voice of the Muslim world” (according to its mission). The topic of conversation? How to fight hate speech, protect holy sites, and build on efforts made to promote tolerance among Muslim populations. The other speakers? The Permanent Representative of the Holy See and Secretary General Antonio Guterres, who, coincidentally, was celebrating his 70th birthday that day.

Guterres’ birthday was not the only coincidence of the date. In the Hebrew calendar, that day also turned out to be Yom Hashoah, Holocaust memorial day. I was allotted five minutes. Could I talk about the Holocaust to over 50 ambassadors from Muslim majority countries? Then again, could I not?

I decided to go for it. I shared the story of Mohammed Helmy, an Egyptian doctor in Berlin who defied the Nazis to save a Jewish patient, Anna Boros. He recruited a friend to forge conversion documents for Anna, and then held a mock wedding for her and an Egyptian friend in the hopes of procuring her an Egyptian passport and one-way ticket out of Germany. Dr. Helmy was recognized posthumously as the first Arab “Righteous Among the Gentiles” by Yad Vashem. My message to the ambassadors was simple: we all need to stand up for each other against hate and we can do it because we have done it before.

As I walked out of the luncheon with Sara Aeder, my chief of staff, I stopped on the steps. “Did this just happen? Did Lana actually trust me to go up in front of 50 ambassadors? Did we all have a conversation together about how to combat radicalization and hate speech?” I will never, ever forget that moment.

Reciting a prayer for an Arab army

Shortly thereafter, I received a message from the UAE embassy in Washington, asking if I would say a few words at an “Interfaith Iftar” at the end of May. To my amazement, Ambassador Otaiba introduced me as Chief Rabbi and gave me the floor. I had several versions of speeches prepared. Instead, I mostly just read the prayer for the welfare of the UAE which is recited every week in the synagogue in Dubai. I paused before I read the words “and its armed forces” to think about the irony of a Jew reciting a prayer for an Arab army. 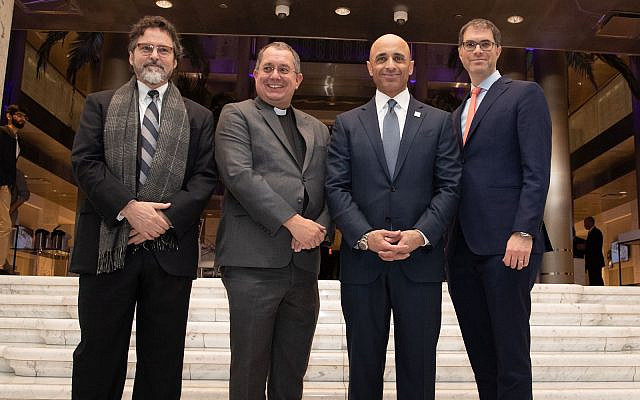 Left to right: Hamza Yusuf, Reverend Andy Thompson, UAE Ambassador to the US, Yousef Al Otaiba, Rabbi Yehuda Sarna at an interfaith iftar at the UAE Embassy in Washington, DC. May 14, 2019 (Courtesy)

Over the past year, I’ve had the privilege of building on these and other relationships with Emirati leaders and visionaries. I’ve represented the Jewish community among other religious leaders in the region; participated in research-action groups on violent extremism; shot videos for the Ministry of Culture; dialogue with the architects and designers of the Abrahamic Family House and spoke at a National Day of Prayer addressing the pandemic. I have been warmly received by UAE ambassadors and consuls general around the world.

Even as I write these words, I can hardly believe I the things that have happened to me. But these stories are not about me, not just about the Jews in the UAE, but also about global Jewry and the world. With the Abraham Accord, we are not commemorating the cessation of hostilities; we are celebrating a family reunion, a bond of trust, and a shared mission to the world. Although I don’t have the exact script for taking us forward, I will do my very best.

About the Author
Rabbi Yehuda Sarna is the Chief Rabbi of the United Arab Emirates. He is Executive Director of the Bronfman Center for Jewish Student Life at New York University (NYU), the University Chaplain for NYU and an Adjunct Assistant Professor of Public Administration in the Robert F. Wagner Graduate School of Public Service.
Related Topics
Related Posts
Comments