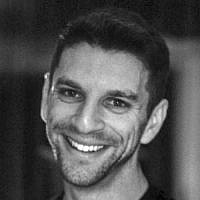 The Blogs
Ben Mendes
Apply for a Blog
Please note that the posts on The Blogs are contributed by third parties. The opinions, facts and any media content in them are presented solely by the authors, and neither The Times of Israel nor its partners assume any responsibility for them. Please contact us in case of abuse. In case of abuse,
Report this post.

This week Israel honors its 23,816 fallen soldiers and victims of terror attacks. I recently wrote about my Passover Seder during quarantine, relating to the story of how I lost a friend in a terror attack (which can be read here). I think it’s safe to assume that many of us living in Israel (and probably many living outside of Israel) have either lost someone, or are close to someone who has.

It’s no secret that Israeli society can be extremely divisive: there are many segments of the population who have strong opinions which they don’t hesitate to voice. However, on Yom HaZikaron (Israeli Memorial Day) the mood shifts. Nearly all are affected no matter where they come from. On this day we unite to mourn and support the families who were permanently changed due to the sacrifice and ultimate price paid by their loved ones.

My parents, who decided to move our family to Israel from New Jersey in 2003 out of Zionist ideals, often reflect on how Memorial Day in Israel contrasts with Memorial Day in the United States. American Memorial Day has largely become a holiday to promote sales, while in Israel all businesses shut down from the evening until the following day, so that most Israelis can attend  memorial services. For those who don’t know, a two-minute siren is sounded at 8 PM on the evening before Memorial Day throughout the entire country, followed by a repeat of this at 11 AM the following morning. As the siren wails plaintively, everyone stops what they are doing. Even cars on the highway pull over and the drivers get out of their cars and stand, heads bowed, until the end of the siren.

In 2012, on Yom HaZikaron, when I  was in the third and final year of my military service in The Combat Engineer Corps of the IDF, my unit took part in the memorial service at the Kiryat Shaul Military Cemetery, near Tel Aviv. This cemetery is the second largest military cemetery in Israel after Mount Herzl in Jerusalem. Each soldier was assigned to the grave of a fallen Combat Engineer soldier. We were each given  a map of where the grave is located, as well as a pamphlet with a short bio of the soldier to whom we were assigned. The idea was to be there to greet the family of the fallen soldier that was assigned to you.

The soldier that I was assigned was Yaakov Menashe. Yaakov was born in Istanbul, Turkey, in 1947 where he studied chemistry and graduated with honors. He moved to Israel on his own in 1970 to a Kibbutz where he worked as a chemist and later joined the IDF’s Combat Engineer Corps as a lone soldier. His commanders wrote that he “volunteered often, and was loved by all.” Yaakov played a major role in the battles that took place in Golan Heights during the Yom Kippur War. In 1975 while on reserve duty, Yaakov was killed at the border of the Golan Heights and Syria.

On that warm May day in 2012, after finally managing to navigate my way around the massive, very crowded cemetery, I finally found Yaakov’s grave. Sweating in my uncomfortable dress uniform, I stood at the grave, where I was supposed to greet the fallen soldier’s family. The scene I had entered was unexpected and interesting. The graves of my assigned area belong primarily to soldiers who have fallen in wars and campaigns dating back to the nineteen-seventies and earlier. As a result, the same families have been meeting in the same exact place every year on Yom Hazikaron, literally for decades. I was able to see that these families of the graves all around me had become quite close to  one another over the years. This was obvious based on their warm greetings to each other as they began to arrive at their respective graves.

“No one is coming,” a middle-aged man standing at the grave adjacent to Yaakov’s grave, said to me. “We’ve been coming to the same spot for over twenty years, and no one ever comes to that grave.” While disappointed that I wouldn’t get a chance to greet Yaakov’s family and hear more about him, I couldn’t help but feel that this could finally be the year that someone does come — perhaps his sister who lived in Haifa according to the pamphlet, or an old friend who had served with him. I therefore chose to stand my ground and wait until after the ceremony (the siren I mentioned earlier, a speech from the Minister of Defense, followed by a 21-gun salute, and finally, the solemn prayer for the dead.)

The man who was standing at the neighboring grave was right, and true to his word, no one showed up at Yaakov’s grave, and just like most Israelis, my mindset began to shift towards the night’s upcoming Independence Day festivities. This is a bizarre and beautiful thing about Israel. Yom HaZikaron is followed immediately at sundown by Yom Haatzmaut (Israeli Independence Day,) celebrating the State of Israel’s independence since 1948. Every city sets up food stands and music, and famous Israeli artists perform in parks and stadiums throughout the night all over the country. We immediately go from one of the saddest days of the year to one of the happiest.

I recently spoke to a native Israeli whose uncle was killed in action during The Yom Kippur War. She told me how her mother was only 13 when it happened, and that this is obviously a very emotional time of year for their whole family. I asked her how her mother deals with this sudden switch from terrible sadness to extreme festivities throughout the country, and this was her mother’s response: “That’s life, that is the reality. Life is full of good and bad, and one needs to know how to make the transition from pain and sorrow to happiness in order to survive and move on. While we’ll never forget, and this pain will be with us forever, you can’t let it bring you down. This switch to festivities is actually a good thing. Despite all of the pain, it’s important to celebrate and be happy.”

About a month  later, I was lucky enough to accompany a Birthright trip as a soldier. Toward the end of the trip, our group was taken on a tour of the Mount Herzl Cemetery, and the soldiers on the trip were asked to share their experience of Yom HaZikaron as a soldier in the IDF. After finishing my story of standing at a grave that no one was ever going to visit, one of the participants on the trip asked me if I was going to return to Yaakov’s grave next Yom Hazikaron. To be honest, up until that moment I hadn’t given this any thought at all. I was finally due to finish my three year service in only a few months, and by the following Yom Hazikaron I would no longer be a soldier. As anyone who has done time in the IDF can attest, the army becomes  your entire world, and it’s very difficult to imagine the world after finishing. Throughout our service, most of us are imagining ourselves after being discharged on a beach in Thailand. Indefinitely. 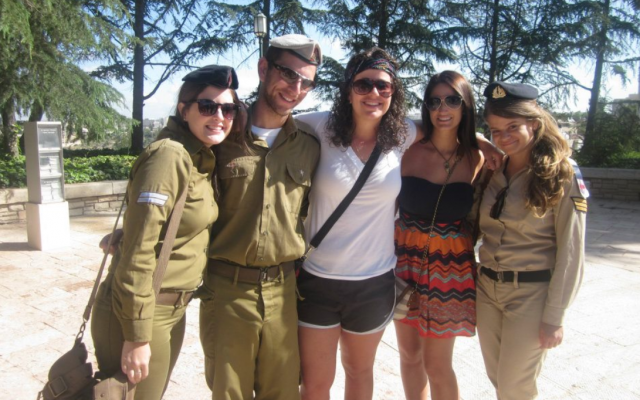 On Birthright, at Mt. Herzl

The following year on Yom HaZikaron, I decided I would indeed go back to Yaakov Menashe’s grave. Some of the surrounding families even recognized me from the previous year and were surprised to see me there. I went back the following year after that, and so the tradition was born. My mother began accompanying me and sometimes my younger sister joined us.

We first go stand at Yaakov’s grave and then when the ceremony is over, we go visit the graves of my father’s parents who are buried in the adjacent civilian cemetery, and then we get falafel at the little falafel stand right outside the cemetery.

Sometimes there is a soldier from my unit assigned to Yaakov’s grave and he fills me in on what’s happening at the base I served at for nearly three  years (apparently the food has improved drastically since I was there.) However, some years we are the only visitors that Yaakov Menashe gets. I have visited Yaakov’s grave every year since 2012, and I am proud to think that should anyone ever show up to pay homage to Yaakov, he will have company and learn that Yaakov has not been alone on Yom Hazikaron, for many years now.

This year, due to social distancing and the Corona situation, will be the first year since 2012 that I won’t be attending a service at the cemetery, but I definitely plan to visit Yaakov’s grave next year, after we return to normalcy. Every soldier’s grave should have someone visiting on Yom HaZikaron, and I consider it a huge honor to be at Yaakov’s grave for the ceremony. 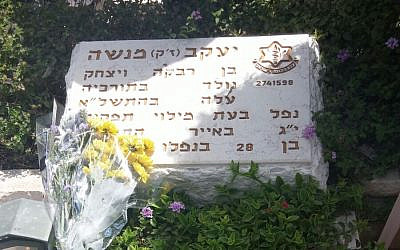 About the Author
Ben is both American and Israeli: born to a religious and Zionist family who moved to Israel in 2003, when he was 13. He has since served in the IDF (Combat Engineer Corps), and graduated Hebrew University where he earned a degree in Hospitality. Throughout his studies and afterwards Ben has worked in 3 different hotels in Israel, and most recently a boutique resort in Fiji (from Tel Aviv).
Related Topics
Related Posts
Comments