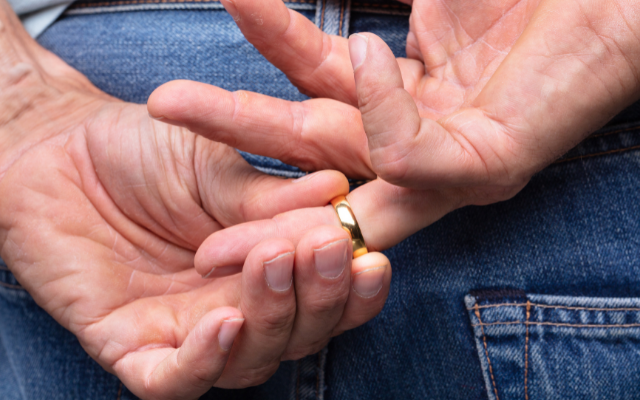 Infidelity is a touchy subject, both in how it’s defined and how it affects divorce.

Before we discuss how infidelity affects divorce we have to define it. Not so easy. And that’s because it is currently understood in so many different ways. If you’re in a traditional marriage and you have physical relations with someone of the same sex as you, is it infidelity? If you’re in a same-sex marriage and you cheat with someone of the opposite sex, is it infidelity? There are also questions about what is considered a sexual relationship. What about kissing someone else? Is being emotionally attached to someone other than your spouse, infidelity?

One could get really bogged down in the semantics before even beginning a discussion of the legal ramifications of infidelity as far as divorce is concerned. And in terms of legal arguments in family court, that sometimes happens. But not in the rabbinic court which is bound by the traditional definition.

For the purposes of this discussion, we’ll be going with that definition. Infidelity is a sexual relationship with someone outside of the marriage, even if it only happens once.

When Secrets Get Revealed

There is a saying. “When alcohol goes in, secrets come out.” But, do you know where secrets are revealed without alcohol being involved? In divorce in court. How one conducts themselves in their private life can have tremendous consequences in a divorce.

Consequently, during divorce proceedings (and even in the event that the spouses utilize mediation to come to an agreement), we attorneys are obligated to probe the family’s secrets. How much does each spouse really earn? Are there savings or property hidden away? What about investments in foreign countries? The more we know about the private goings on in a family, the better we are able to represent our clients. So, one of the questions attorneys ask in their first meeting with a client is whether or not there has been any infidelity – on either side. The answer will affect the strategy a lawyer uses to get the best settlement for his client.

Is Infidelity Grounds for Divorce?

The three main aspects of divorce in Israel are asset division, child custody and child support. These can be settled in mediation, or if that doesn’t work, through litigation in either the secular family court or the rabbinic court. A Jewish couple is required to go to the bet din for the actual absolution of their marriage. For a couple where one or both are not Jewish, the divorce aspect will be settled in family court. While there are some differences, in both courts the effect of infidelity on a final settlement can be quite dramatic depending on the circumstances.

In the rabbinic court where the grounds for divorce are defined by halacha (Jewish law) and rabbinic case law, adultery is clearly stated as a basis to end a marriage; even though it is not easy to prove. Here, a woman who has committed adultery is not entitled to her ketuba money. This is the amount stipulated in the religious marriage document that the husband would pay the wife if they get divorced. There is no alimony in Israel other than what is written in the ketuba so this would not apply in the family court. A father is however, required to support his children until their 18th birthday in both courts.

Both courts take infidelity seriously and make their decisions about assets division, child custody and child support accordingly. They examine the negative financial consequences for the family resulting from the indiscretion. Child support payments may be changed. Assets, rather than being split equally, may be adjusted. They consider whether or not the offending party’s conduct has put into question their ability to be a responsible parent. An offending parent may lose out on full custody or even shared custody because of his or her actions.

Alternatively, there have been cases in family court where judges haven’t considered the infidelity relevant at all and decisions are made without taking it into account.

Can Infidelity Be Legally Justified?

People can justify almost anything if they feel it’s for a good reason. But there’s a big difference between emotionally rationalizing behavior and proving that it’s legal. And judges are obligated to examine facts, not feelings when a case is presented in court. Surprisingly, one may find lots of emotional reasons why cheating on their spouse is understandable. But, it’s up to the judge to make the final decision.

The fact that one of the spouses has committed adultery doesn’t always come up in a divorce case, depending on the circumstances. Notwithstanding, it is extremely important for you to share everything with your attorney. Yes, even the embarrassing details. If your lawyer is blindsided in court, it could make a huge difference in your final settlement. And as difficult as it may be, I always advise my clients to try and hold their emotions in check whether sitting at the negotiating table or appearing in court. I have witnessed a number of surprises revealed in the heat of the moment.

There was a case recently that reached the bench of Judge Nimrod Felix, of the Jerusalem Family Court. A woman was suing her husband for divorce. She could have kept quiet about her infidelity. Her husband was unaware of it and her child had not suffered any consequences because of her actions. If it had remained undisclosed she would have shared in the equal division of the couple’s assets. But she became angry in court and chose to lash out at her husband with a disturbing fact.

She taunted him with the news that he was not the father of their 5-year-old son. His biological father was one of the woman’s coworkers who was aware of the fact that the child was his. She claimed she was motivated to conceive the child with someone else after learning that her husband was sterile. She argued that her actions should not be considered infidelity because her husband had deceived her by concealing his sterility.

The husband, in turn, brought an infidelity suit against her and asked for 650,000 NIS. He claimed compensation for the money he had spent to support the child. And expressed his severe mental anguish and emotional pain of disconnection from the child. He said he felt humiliation, shame and a huge blow to his personal self-esteem.

The judge declared that this was not actually a claim for infidelity but rather for paternity fraud. He said the wife failed to prove the husband was aware of his sterility. And, even if he had been aware there were other solutions they could have explored together to bring children into their lives.

The judge set compensation at 275,000 NIS with an additional 25,000 NIS to cover the father’s legal expenses. He recognized the husband’s humiliation, the blow to his dignity and to his personal self-esteem. The sum wasn’t higher because the husband couldn’t show evidence that he had supported the child. Nor could he disprove the mother’s claims that she in fact, was the one providing for the child.

One Size Does Not Fit All

As with many aspects of the legal system, when dealing with a divorce, things may appear one way on the books while being left up to the interpretation of the bet din or the family court judge when it comes to their application. There are many variables in each situation that make it almost impossible to determine ahead of time how infidelity will affect the outcome of a divorce.

But several things are clear; tell your attorney everything, choose the court you file in very carefully, and keep your emotions in check.

And may I suggest you consider the consequences of infidelity on your spouse and your children, before you act.