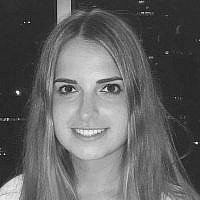 The Blogs
Hadar Langerman
Apply for a Blog
Please note that the posts on The Blogs are contributed by third parties. The opinions, facts and any media content in them are presented solely by the authors, and neither The Times of Israel nor its partners assume any responsibility for them. Please contact us in case of abuse. In case of abuse,
Report this post.

This past month Israel celebrated its 70th year of independence. Whilst this was a joyous time for Israelis, the Palestinians marked it with protests at the Gaza border starting on March 30th. These accelerated in their violence as ‘Nakba’ day, the Palestinian term for the creation of the State of Israel, which translates as ‘the catastrophe’, approached. Palestinians, orchestrated by Hamas, marched up to and tried to cross the Gaza border with the aim of entering and waging violence inside Israel. They set fire to tyres and kites, creating a thick, polluting smoke so that the visibility of Israeli soldiers guarding the border was compromised, allowing the 40,000 protestors a greater likelihood of entering Israel. Despite global media outlets labelling these protests as ‘peaceful’, they were far from it.

The Gaza protests were organized by Hamas, a terrorist organisation that seeks the destruction of Israel and the killing of Jews around the world. They also arranged for buses to take as many civilians as possible to the border. This occurred alongside the opening of the American Embassy in Jerusalem on May 14th, which had sparked outrage from Palestinians who claim the city in its entirety. Both of these events marked 70 years of Israel’s independence.

The media left out crucial contextual points on the threats to Israeli livelihood. For example, many Israelis live very near to the border and it was therefore vital that the IDF protect their civilians who were vulnerable to being killed in their villages and kibutzes just a few miles away. Israel, like any other democracy, has both a right and a duty to defend its civilians.

These protests have, however, left a heart-breaking death toll over the last six weeks. The majority of the deaths occurred on May 14th, with 50 out of 62 of the deceased being named as Hamas operatives, as confirmed by senior Hamas leader Salah al-Bardawil. Nonetheless, the international media omitted this crucial detail about the identity of the deceased; that they were in large part Hamas operatives. The lack of context and information on the deceased from media outlets lead to a troublesome lack of support of the IDF’s actions in protecting Israeli civilians. If these Hamas operatives were not stopped, they could have marched through the border and murdered Israeli civilians, “ripping out their hearts”, in the words of Hamas founder Yahya Sinwar.

But despite this truth, death is still upsetting. The saddest of the deaths are those of young children. The true questioning, however, should be to Palestinians who are bringing young children to a war zone where injury and sometimes death is inevitable. After all, they were warned by leaflets dropped in Gaza by the IDF, alerting Gazans to potential lethal danger if they approached the border. Golda Meir put it best when she said: “there will only be peace when they love their children more than they hate us’’. This means protecting children rather than allowing or even encouraging them to participate in this kind of protest.

Last month, a London event called ‘Kaddish for Gaza’ included thirty-five activists standing outside of parliament, reading out a list of names of those killed in Gaza and reciting Kaddish (the Jewish mourning prayer) for them. One of the organisers at this event justified it by saying: ‘‘By Jewishly mourning the lives lost, we were not condoning terrorism, Hamas or violence of any form. Rather, we were facing up to the ugly reality of what the Occupation of the West Bank and Gaza by the State of Israel results in time and time again.’’

Despite the organiser’s view, by saying Kaddish for Hamas operatives that were killed, they were rationalising terrorism. It is perplexing that they do not hesitate to say Kaddish for Hamas terrorists while being so reluctant to point out the evident danger posed to Israeli civilians by the violent actions of Hamas. They are so quick to criticize Israel at any opportunity, yet fail to condemn Hamas for putting the lives of innocent Israeli civilians at risk. Hamas and other terrorist groups in the Gaza strip have since been consistently firing rockets at Israeli civilians. It is unjust to suggest that Israel willingly sought harm to the Palestinians as they used restrained tactics and tried to prevent death as much as possible; with most of the casualties being known Hamas operatives. The media has reinforced Hamas’ attacks on Israel and falsely laid blame with the IDF.