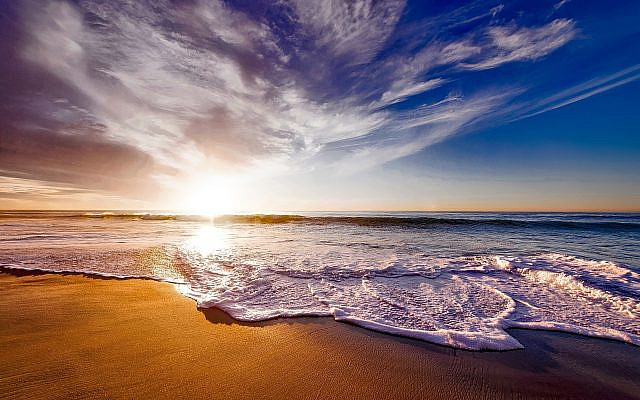 The beach at sunset. Image by David Mark from Pixabay

On February 21, the Israeli Ministries of Environmental Protection, the Interior and Health jointly asked the public to refrain from going to any Mediterranean beaches on Israel’s 121 mile (195 kilometer) coastline, until further notice, due to a spill of hundreds of tons of tar. Beachgoers must stay away, at a time when Israelis are finally emerging from an extended lockdown and seeking the critical and soul nourishing peace of the sea.

This unprecedented action comes after an oil and tar spill from a ship at sea around February 11. The spill has so far killed whales and sea turtles, and sickened human volunteers who tried to contain and clean up gobs of tar floating onto the beaches.

Scientists note that such spills don’t stay local or only on the water’s surface. This spill is impacting the broader Mediterranean Sea and nearby Lebanon, and could ultimately impact all levels of organisms that keep the Mediterranean ecosystem in balance. Though ships in Mediterranean waters off Israel are tracked by the Israeli government and European marine monitoring agencies, many days after the disaster authorities still don’t know which ship spilled its oil and tar, thus preventing efforts to contain any more potential damage. 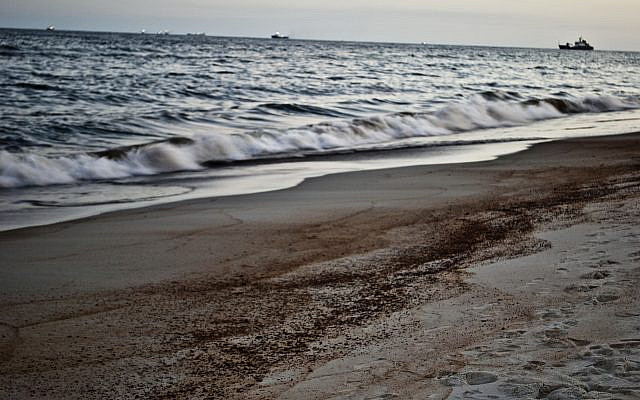 Beach with oil, image by June Hanabi from Pixabay

The new spill in the Mediterranean is both tragic and predictable. It’s tragic because of the toll on ocean and coastal wildlife—and the still unknown impact on people living near the beaches. Tar is known to be both toxic and carcinogenic because it contains high levels of benzene, a hydrocarbon.

The spill is predictable because we choose to live a lifestyle suffused with petroleum. In Israel, the U.S. or anywhere, when we dig deep in the depths of the earth and dredge up dark matter like oil and tar deposited hundreds of millions of years ago, we need to recognize that this matter could end up despoiling natural places like our delicate beaches. Oil spills are an inevitable consequence of our fossil-fuel intensive lifestyle. When ships run on oil, and countless barrels of oil and tar are transported long distances, there is always a risk of some spilling on land and in the ocean.

A giant fin whale that washed up after the Mediterranean spill was found to have viscous black fluid in its stomach, and most likely died from the tar. Jonah the Biblical prophet found himself in the belly of a different whale, and chose to accept his holy mission of calling for society-wide repentance. If Jonah had found oil and tar in the belly of the whale that swallowed him, what would he have prophesied about fossil fuels? What is the toxic pollution in the belly of the whale messaging to us? As Dr. Alon Tal wrote in a Times of Israel blog, “even this most powerful of creatures cannot survive when its only home is contaminated with the debris of human progress.” 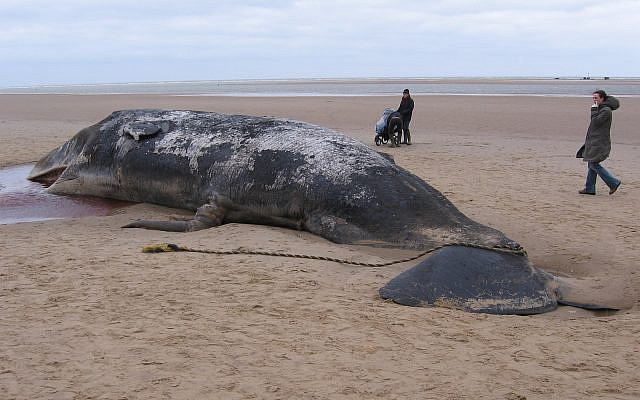 The enormity of this environmental fallout should give us pause in our society’s headlong embrace of oil and gas. It may be surprising to learn that the Israeli government’s Europe-Asia Pipeline Co. (EAPC) seeks “to turn Eilat into an oil and gas import and export hub.” As Sue Surkes reported in the Times of Israel several months ago, EAPC “signed a memorandum of understanding with the United Arab Emirates joint venture MED-RED Land Bridge to transport oil and related products from the Gulf to Europe. The oil will be transported by ship from the Persian Gulf to a Red Sea terminal in Eilat, and from there, via an aging overland pipeline that runs through the country’s Arava and Negev deserts, to Ashkelon on the southern Mediterranean coast. From Ashkelon, the oil will be reloaded onto tankers for shipment to markets in Southern Europe. There are also plans, still at various early stages, to use the Eilat terminal to transport the bonanza of natural gas found in the Mediterranean to the Gulf and the Far East, including talk of a possible liquefaction plant.”

And as Globes reported, Israeli Energy Minister Yuval Steinitz “hopes that Chevron will be interested in involvement in construction of the EastMed gas pipeline.” The plans are “for 120 oil tankers to begin delivering oil from the Persian Gulf to Eilat. From there, 30 million tons of oil a year will be piped to Ashkelon to be shipped via the Mediterranean to Europe,” as Dr. Alon Tal of Tel Aviv University writes. 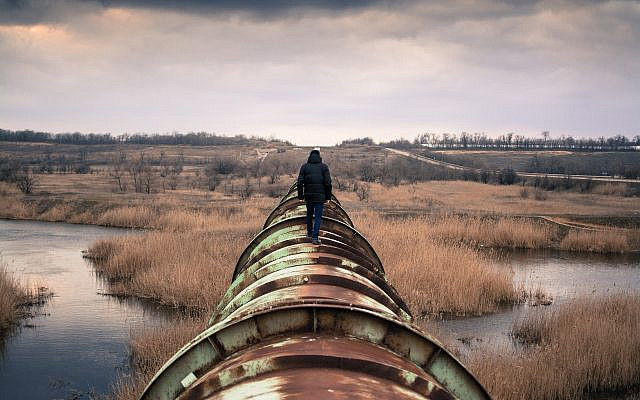 An aging overland pipeline, oil offloaded from and reloaded onto tanker ships…what could go wrong? Six years ago a pipeline of the Israeli government-owned Europe-Asia Pipeline Company ruptured, releasing about 1.3 million gallons (5 million liters) of crude oil into the ecosystem of southern Israel, including the Evrona Nature Reserve. Hundreds of scientists warn that the new pipeline deal will imperil Eilat’s critical coral reefs, which have proven more resilient in the face of climate change than the coral of the Great Barrier Reef.

In the face of fossil fuel disasters and governmental unwillingness to pull back from the precipice, what guidance can age-old spiritual wisdom of the Bible offer us? Genesis chapter 14 verse 10 states: “Now the Valley of Siddim was dotted with bitumen pits; and the kings of Sodom and Gomorrah, in their flight, threw themselves into them, while the rest escaped to the hill country.” Rabbi Leo Dee and I explore the ecological implications of this verse in Eco Bible volume 1: An Ecological Commentary on Genesis of Exodus, as well as in a prior Times of Israel post. Here’s the Torah of tar: the kings of Sodom and Gomorrah fell into tarry pits of “black gold” or bitumen, also known as asphalt (in Hebrew, chemar). In ancient times as today, surface seepages of this thick, sticky form of crude oil occurred and still occur in a limited number of places in the world, including Azerbaijan, Iran, Pennsylvania, Alberta, and the Dead Sea.

Why does the Torah mention this geological detail in relation to the leaders of these ultimately decimated societies? The Book of Genesis continues, “The invaders [four Middle Eastern kings] seized all the wealth of Sodom and Gomorrah and all their provisions, and went their way” (Genesis chapter 14 verse 11). Once the kings of Sodom and Gomorrah were trapped in the bitumen pits, they lost all of their wickedly gained wealth. The story of the kings stuck in bitumen is a powerful metaphor for our world today.

Bitumen is considered the dirtiest and most polluting fossil fuel, due to the energy required to separate the crude oil from the sand and the carcinogenic chemicals used to thin it for pipeline transport. Canada is the planet’s fourth largest oil producer, and 60 percent of its oil comes from the bitumen of oil sands. In July 2010, the largest oil pipeline spill in US history occurred, spilling over a million gallons of Canadian diluted bitumen (dilbit) into Michigan’s Kalamazoo River. As Inside Climate News reported, “The spill triggered the most expensive [on-land] clean-up in US history—more than ¾ of a billion dollars—and it lingered on for years.”

Today, we and our leaders choose to embrace fossil fuel use by more environmentally safe energy sources like solar and wind. Oil remains our fuel of choice to make gasoline for cars and trucks, jet fuel for airplanes, tar for paint, asphalt for paving roads, and plastics which are filling our oceans with toxic trash that never fully breaks down. 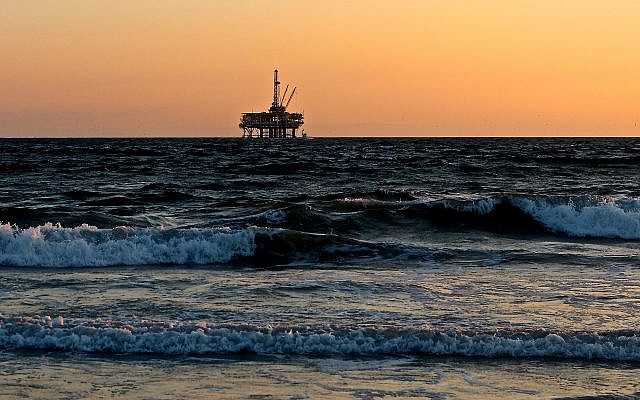 Oil rig at sea, image by C Morrison from Pixabay

The rabbis of the Midrash (around 5th century C.E.) teach that Abraham, the prophet of light, pulled the kings out of the bitumen pits. Abraham provides an example of lifting people from being trapped in fossil fuels. And scientists published a 2017 study and environmental roadmap on how most countries in the world could transition from fossil fuels to 100 percent wind, water, and solar energy by 2050.

To conclude I couldn’t agree more with Rabbi Benjamin Weiner who writes, “The Book of Exodus draws a sharp distinction between oppressor and oppressed—the Egyptian overlord and the Israelite slave. While our world is plagued by such stark imbalances of power, I find myself preoccupied with the way that our society locks us, its beneficiaries, into oppressive roles. My daily routine is sustained by the ceaseless extraction and burning of fossil fuels. When I take stock of this, I want to cry out to God, not as an enslaved Israelite, but as an Egyptian, sickened by the destructive power entangled in my hands.” (as quoted in Rabbi Ellen Bernstein’s The Promise of the Land: A Passover Haggadah)

Deeply embedded in an oil-based lifestyle, we are both victims and perpetrators of oil spills. But at this time of empowered living, we can claim our power and actively steer our collective destiny away from the profit motives of politicians and companies.

Each of us is Jonah inside the whale, whose belly and lungs have had enough of petroleum. We do not need to wait until someone rescues us—or until we run out of fossil fuels—since God is both warning and empowering us now to take steps as individuals, communities, and nations to liberate ourselves of this addiction and live fossil free.

About the Author
Rabbi Yonatan Neril founded and directs the international Interfaith Center for Sustainable Development (ICSD), including its Jewish Eco Seminars branch. Yonatan is coauthor of the bestselling book Eco Bible, published by ICSD, which shines new light on how the Hebrew Bible and great religious thinkers have urged human care and stewardship of nature for thousands of years as a central message of spiritual wisdom. He has spoken internationally on religion and the environment, including at the UN Environment Assembly, the Fez Climate Conscience Summit, the Parliament of World Religions, and the Pontifical Urban University. He co-organized twelve interfaith environmental conferences in Jerusalem, New York City, Washington D.C., Atlanta, Los Angeles, and elsewhere. ICSD reveals the connection between religion and ecology and mobilizes faith communities to act. Yonatan is a member of the United Nations Environment Program's Faith-based Advisory Council, and of the Pontifical Universities' Alliance for Laudato Si' Advisory Council. As part of ICSD's Faith Inspired Renewable Energy Project in Africa, he has been involved in facilitating the development of a commercial scale solar field on church lands in Africa. Yonatan is lead author and general editor of two other books on Jewish environmental ethics including Uplifting People and Planet: 18 Essential Jewish Teachings on the Environment. Yonatan also co-authored three ICSD reports on faith and ecology courses in seminary education in Israel, North America, and Rome. Raised in California, Yonatan completed an M.A. and B.A. from Stanford University with a focus on global environmental issues, and received rabbinical ordination in Israel. He was a Dorot Fellow, PresenTense Fellow, and Haas Koshland Award recipient. He lives with his wife, Shana, and their two children in Jerusalem. He enjoys hiking and being in nature.
Comments