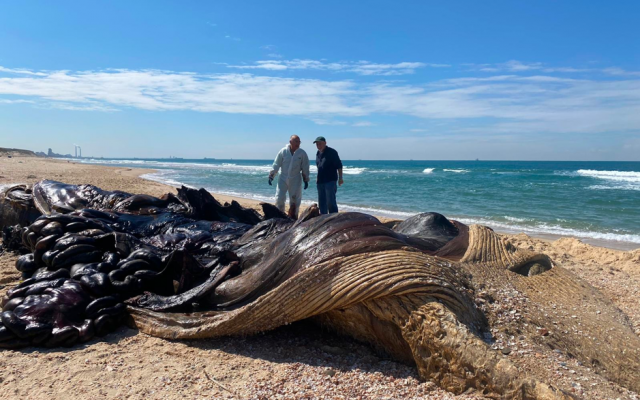 Yesterday, I attended a most unusual autopsy. It was conducted by Dr. Roni King, the chief veterinarian of Israel’s Parks and Nature Authority along with two Hebrew University veterinary pathologists. The experts were trying to understand what had caused a young, 19-ton fin whale to wash up dead onto Israel’s Nitzanim beach.

After they cut the enormous creature open, significant tar accumulations could be identified inside its massive entrails. It will take a while for the laboratories to confirm the prevailing assumption, but all the zoologists on site seemed to share the same diagnosis: death by oil.

The recent oil spill, with its subsequent tar disaster on Israeli beaches, is particularly sad because it shows just how fragile seemingly vast ecological systems are and how tenuous environmental progress is. I remember coming to Israeli beaches as a child. They were chronically filthy from the local sewage that flowed freely into the Mediterranean and the tar — the coagulated oil — which was routinely released from tankers and ships crossing the Mediterranean. I got used to swimming for fifteen minutes and then spending an hour scrubbing my feet with turpentine to get the oily tar off of my feet.

In 1976, this started to change. Israel signed the Barcelona Convention for Protection of the Mediterranean against Pollution and, along with 16 countries around the basin, began to change the way it treated this iconic resource. Ships that had always dumped their oily ballast waters into the sea before coming to port were prohibited from doing so. New requirements for double-hulled tankers dramatically reduced the likelihood of leaks. The beaches became cleaner for people and healthier for marine life.

But this week, decades of steady progress seemed to be erased by hundreds of tons of tar that inundated Israeli beaches. The contamination was traced to an oil spill, presumably released from a ship some 50 kilometers away from the Israeli coastline, although the actual culprit remains unclear. Aerial photographs suggest that any of 10 vessels might be responsible.

The results were reported in news around the world as the largest oil spill to ever hit Israel, with tar deposited along the country’s entire 195-kilometer, Mediterranean coastline. Horrible footage of sea turtles, birds and fish, coated in the toxic oily mess, littered lifeless on the shoreline, filled television screens. But it was the 19-ton fin whale that washed up onto the beach on Thursday that became the defining image of the ecological disaster.

Fin whales are not uncommon in the Mediterranean — there is an estimated population of 5,000. But they rarely venture into the eastern basin and are not among the marine species with which Israelis are familiar. It took three days for the Nature Reserve Authority to assemble a scientific team that could take the necessary tissue samples and offer a report.

Roni King, who oversaw the operation, has been working as the doctor for Israel’s diverse wildlife for decades. He says he has never seen anything like it. King estimates that the whale was somewhat larger than the original estimates, of 17.5 meters — probably closer to 19. 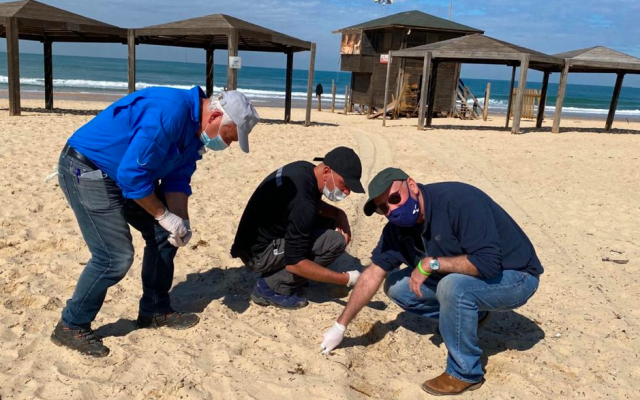 Gazing into the guts of the first whale I had ever seen up close, my initial impression was informed by its massive dimensions, a symbol of the awesome and mysterious ecosystem below the waves. But even this most powerful of creatures cannot survive when its only home is contaminated with the debris of human progress. Lying there, with its stomach sawed open, the young whale most of all seemed vulnerable to me.

Authorities prepared an enormous hole for burial adjacent to the coastline. Bulldozers were brought in to cart away the remains. Presumably, after the flesh decomposes, the bones will be dug up for display in a museum. Like I said, whales are very rare in these parts.

As a professor of public policy, I naturally look for the lessons that might be learned from the ecological catastrophe. Environmental groups are critical of the government’s languid response. For reasons that remain unclear, even though the massive oil spill was identifiable ten days ago, coastguard and environmental patrols only realized they had a disaster on their hand when the oil was already entering Israeli waters, coagulated into millions of tarballs. Had the response come earlier, in the heart of the sea — clean-up would have been far more efficient and damage far less profound. Coordination with European marine monitoring agencies clearly needs to improve.

The Ministry of Environment’s highly professional marine protection team remains underfunded and understaffed. This is a result of systemic government failure. In 2008, the cabinet approved an emergency response strategy which was to have been formalized as legislation with regular funding. The proposed law would have created a far more robust regulatory and pollution response presence, establishing, for example, environmental stations on the Haifa and Ashkelon coasts, like the marine protection post in Eilat. The sad truth is that as long as there is shipping, there will be human error and pollution events.

But like so many of Israel’s official environmental promises, the resolution never got beyond the cabinet room. A politically weak and poorly financed environmental ministry, headed by a litany of politicians who never really wanted the appointment in the first place, was never able to garner the political will to translate the action plan into reality. In 2013, Israel’s state comptroller report took the government to task for the omission. No one was listening.

Notwithstanding the new challenges posed by Israel’s massive natural gas installations, and the threat their oily condensate poses to coastlines but ten kilometers away, Israel’s enforcement capacity along its seashore has not been meaningfully improved. This week’s spill showed just how helpless we are to respond in real time when the hazard is released 50 kilometers away.

In general, Israel needs to be more proactive in its marine policies. Conservation biologists call for 30% of Israel’s Mediterranean waters to be declared marine reserves. Thus far, only 3% have been set aside while there may be plans in the pipeline for another 10 or 15% more. Overfishing in the Mediterranean is chronic: the UN estimates that more than 60% of the sea’s commercial species are being fished unsustainably. Israel needs to do its part.

Most of all, the oil deluge is a wake-up call: although it will take at least a year for clean-up efforts to remove the worst of the tar and for the remainder to dissipate and eventually disintegrate – the environmental ministry still does not define the event as a disaster. (This leaves much of the clean-up efforts in the hands of municipal authorities, who are poorly equipped for this task.) Indeed, the results could have been far worse. For instance, the oil spill did not close down the desalination plants that provide us with drinking water. And while officially declared shut, beaches should be open again for swimming in the spring.

Non-government organizations like EcoOcean and Zalul, along with the thousands of volunteers who spontaneously answered the call,  coming down to local beaches with their gloves and plastic bags over the weekend to physically remove the oily, black muck — actually help. Significant quantities of tar are being removed. The public response reflects the deep appreciation all Israeli citizens share for Israel’s seashore. For millions of Israelis during the Corona lockdown, the crash of the waves and open sandy vistas offered a critical refuge from the suffocation of lockdown.

The pious declarations of politicians like Prime Minister Netanyahu, who visited Ashdod to see the damage first hand, therefore ring particularly empty, indeed hypocritical, when one considers the new reality that the Mediterranean is facing. Beyond the burgeoning, off-shore, natural gas production, as part of the new “Abraham Accords,” 120 oil tankers are to begin delivering oil from the Persian Gulf to Eilat. From there, 30 million tons of oil a year will be piped to Ashkelon to be shipped via the Mediterranean to Europe.

While one understands Israel’s interest in helping its new friends in the Gulf, in a world rapidly moving to an economy based on renewable energy, this sort of myopic, cynical commitment once again puts the government on the wrong side of history – and ecology. It surely gives little consideration to the whales and magical organisms that still need to find their home in an ever-crowded and threatened Mediterranean Sea.

About the Author
Alon Tal is a professor at the Tel Aviv University Department of Public Policy and a veteran environmental activist.
Related Topics
Related Posts
Comments