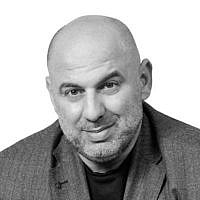 The Blogs
Solomon Amar
Apply for a Blog
Advertisement
Please note that the posts on The Blogs are contributed by third parties. The opinions, facts and any media content in them are presented solely by the authors, and neither The Times of Israel nor its partners assume any responsibility for them. Please contact us in case of abuse. In case of abuse,
Report this post.

During the past few years, Ukraine has made a name for itself as a leading alternative for Israeli companies and Israeli entrepreneurs, searching for high qualified tech workers outside of Israel, whether directly employed or through outsourcing. The ongoing growing shortage of Hi-tech workers in Israel along with the high demands of existing workers have brought many companies- R&D companies and startups to employ talents- developers, programmers and software QA engineers from East European countries, preferably from Ukraine.

According to the Israel Innovation Authority’s report from 2019, nearly 50% of the Israeli outsourcing positions have been fulfilled by workers from Eastern European countries. Ukraine has been leading them as a preferable destination due to its location, work terms, recruitment and employment of workers.

Recruiting local employees and legally employing talents that have left Ukraine did not seem like a secure option, especially as most of the Ukrainian developers have fled the country and scattered all over Europe, mainly in Poland.

For the end of the war doesn’t seem close, and even when the war does come to an end, several months will pass till the Ukraine’s local market will start its economic and employment recovery. The logical conclusion is that Ukraine can’t be the only alternative, therefore it is time to start the search for the “next Ukraine”.

As the war started, a massive movement of Ukrainian talents were able to leave to other European countries, and those that have been outside of the Country in February haven’t returned. The Israeli companies that have been directly employing those talents using their local entity, found themselves in a complicated situation.

After working over 100 days outside their country, the Ukrainian talents have started showing their concern regarding their legal continuance in the countries where they have temporarily settled. The matter of direct employment and taxation in these countries has become their main concern since without a formal direct employer their legal status did not allow them long term legal work

The solution for this situation is the use of direct local employment through outsourcing and out staffing. Direct employment solves the legal status, the rate exchange and the taxation problems all at once. An Israeli product company that in the past could easily open a legal entity in Ukraine and use it to employ tens of workers, has now found itself dealing mainly with the employees’ welfare.

Instead of focusing on developing and promoting their products, the new situation compelled the Israeli companies to open several different entities in several different countries along with bank accounts, hiring local lawyers and accountants, maintaining several offices and preserving the local workers in adjustment to every country and its taxation, work culture, cost of living and mentality.

Since the beginning of the Russian-Ukrainian war there has been a complete change of orientation, a U-turn indeed.

Companies that have been directly employing workers in Ukraine have been closing their local entities and transferring their workers to outsourcing companies. Product companies have already lost interest in HR since the effortlessness and comfort that Ukraine offered them does not exist in the rest of Europe. Talents- rather work for a well-known leading company with an international operating system rather than work for an unknown small Israeli startup. Along with the Ukrainian talents’ concerns regarding local taxation and their legal status, and the companies concerns to meet the European standards and committing tax felonies, outsourcing seems like the only relevant solution.

In addition to the employment of Ukrainian talents outside of Ukraine another problematic matter that rose was the continuation of new recruitments. The war in Europe has not stopped the Israeli companies’ efforts to produce and sell, therefore the need for high quality and qualified workers is still on the rise. As the pressure increased on Israeli and global companies to provide US Dollar salary, work permits and visas throughout Europe, for the outsourcing companies business went on as usual with the possibility of continuous employment for their workers. The only question was- what is the new preferable destination? The answer lies on the other side of the Ukrainian border, in Poland.

Amongst the East European countries, Poland has the most stable economy and reachable living conditions that are not much different from the Ukrainian ones, prewar. The closeness of Poland to Ukraine has made it easier to relocate the talents.  With living conditions and similar employment terms, Poland has made it possible to go on with direct employment of the Ukrainian talents and the companies -all searching for stability and maintaining a normal life.

Poland offers a large population of engineers and software developers. In fact, the Polish Tech community is one of the largest in East Europe with more than 430,000 local developers. The IT market is rapidly evolving at a constant rate of 5-10% and more than 25% of outsourced talents are actively working in the country. Poland also offers several expanded programs intended for startups including the largest platform in Central Europe, founded with assistance from the Polish government financing and various European funds. This specific program offers the companies that enroll a variety of services such as legal support, financing and mentoring.

In the past few years more R&D centers have been set up in the country, enjoying tax benefits up to 70% and only 4% tax on revenue from a product service once issued to the market.

Even prewar, many Israeli companies have begun investing in Poland, enjoying relevant benefits and efficient work procedures. Once an Israeli company wishes to found a Polish company it must prepare an application, a process that takes approximately 4 to8 weeks, next is the awaiting for the decision for 3additional months and once the decision is made- founding the company within days.

The Polish government’s involvement and its aspiration to simplify the complicated work process makes it preferable for entrepreneurs and investors to open a Polish entity.

Even when the war will come to an end, East Europe is facing a long and difficult recovery period, one that will not allow any stability or certainty – which are needed in every employment field.

If in the past the use of outsourcing companies for software development and recruitment was only temporary, today these companies are the foundation stones and a main supporters of the professional activities of every company that sees itself operating in the international market and adjusting itself to the changing circumstances.