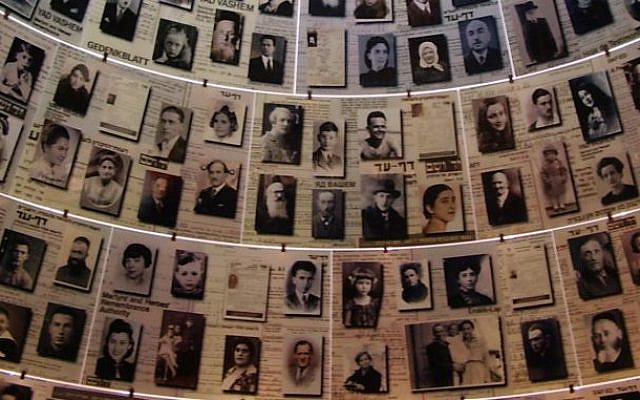 The hall of names at Yad Vashem, one of the places where we re-humanize the Jewish victims of the Holocaust. (Source: Dr. Avishai Teicher, PikiWiki)

“Never ascribe to malice what can be explained by ignorance, confusion, or ineptitude.” This statement was made by Rabbi Geoffrey Dennis[1] in response to a disturbing incident that happened in Texas last week.

In a teacher training in Southlake, a suburb outside Dallas, the curriculum director made a surprising statement: “Make sure that if you have a book on the Holocaust, that you have one that has an opposing…that has other perspectives.”[2]

She was trying to clarify a new law that took effect in Texas in September. The law states that if teachers choose to teach current events or controversial issues, they need to explore the issues from “diverse and contending perspectives” without taking sides.[3] In the abstract, this might sound like a good idea. In reality, this law was specifically designed to prevent teachers from looking at American history through a lens of how racism and other bias has impacted that history. Not surprisingly, the law is ambiguous and confusing.

“How do you oppose the Holocaust?” one of the teachers asked, sounding rather shocked.[2]

A secretly made tape of this conversation was leaked to the media and a firestorm erupted. The Anti-Defamation League and the local rabbis went to work immediately. The school district administrators stoked their own fire by taking days to unwind an obviously indefensible position. After a few days, however, the district superintendent issued an apology, stating that the school district’s teachers and administrators know there are not two sides of the Holocaust.[2]

And that was that.[4] Or it should have been, but the Jewish world was more than a little shaken. “What should we do?” friends and colleagues asked me. “Isn’t there something we should be doing about this?”

At about the same time as this was going on in Texas, my new synagogue in Singapore was talking about antisemitic incidents in their schools. None of these incidents rose to the level of suggesting we make room for Holocaust deniers on our schools’ library shelves, but they were disturbing, nonetheless. Swastikas drawn on lockers, antisemitic jokes, pictures of the Holocaust placed in a yearbook with no explanation, videos about the Middle Ages which baldly stated that the Jews killed Christ.

Our rabbi held a workshop to let Jewish teens and their parents talk about the antisemitism they had experienced. We agreed that ignorance, confusion, and ineptitude could be blamed for most of these incidents.

Ignorance, confusion, and ineptitude accurately sum up what happened in Southlake. I think they also sum up most of the antisemitic incidents I experienced in Texas, as well as the ones that I have heard about in Singapore. Most antisemitic incidents in schools, even the drawing of swastikas on floors and lockers, come from a place of ignorance, not one of malice.

These weeds of antisemitism are, of course, rooted in a past full of malice. Although these ideas are often voiced by the unthinking, they are the same ideas voiced by those with a deep hatred of Judaism and of the pluralism that Jews represent. Therefore, even if antisemitic comments are made out of ignorance, we cannot ignore them. Ignoring such comments allows the unacceptable to be normalized, which opens the door to ideas and actions that are even less acceptable.

“Explain it to me”

When confronted about an antisemitic comment, the offenders often reply, “It was just a joke.” When we object that we did not find it funny, we are told, “You just have no sense of humor.” “What should we do then?” one of the teens at the antisemitism workshop wanted to know.

“You say, ‘Explain it to me,’” I told her. When forced to explain a biased joke, many people recognize that it isn’t funny; it’s just mean. They begin to see the people at the butt of their joke as human beings rather than simply a faceless mass. This simple question, “explain it to me,” can change someone’s perspective. It can turn an uncomfortable interaction into a teaching moment.

Most people who act out of ignorance or confusion are not trying to be mean. They intend to be acting with good will, confused though it might be. I have found that assuming other people are acting out of goodness serves me well most of the time. Assuming goodness allows you to respond with kindness, to make any interaction a teaching moment. Sometimes even when their intent is confrontational responding with kindness can turn a confrontation into a potential connection.[6]

So what should we do?

Whether the perpetrator of the antisemitic incident is a teacher, a student, or an administrator, our goal in the aftermath should be to educate, not to discipline. It should be to educate not just that individual but everyone in the school or district. The way to prevent people from drawing swastikas in school is to teach them what those swastikas truly represent. More often than not, they do not understand the severity of the attack they are making.

Our response to the disturbing events in Texas should not be tsuris[7] over what happened in Texas. It should be to educate ourselves, to intellectually and psychologically arm ourselves so that we can go out and educate our own communities. We must be the watchmen[8], guiding our fellow humans to greater awareness and understanding of each other’s humanity.

[4] Let me be clear – this law is bad and we should be working to oppose it. But not because it says you need to teach both sides of the Holocaust. We should oppose it because it is meant to block the unbiased teaching of the history of people of color in America.

[5] See Reclaiming our strength – the Holocaust from a Jewish perspective

[6] See When you meet a Nazi at a gas station