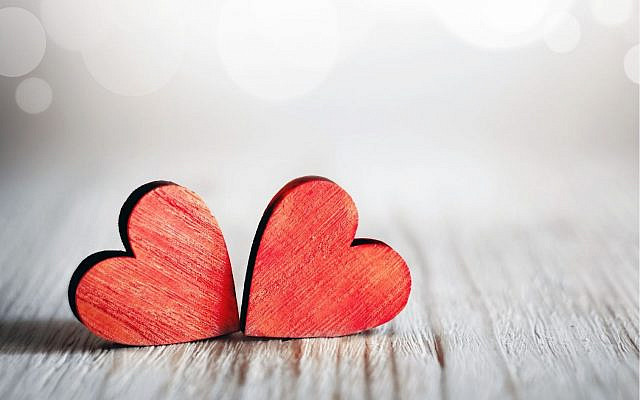 The Jewish Festival of Love.

In Talmudic times 2000 years ago, countless marriages were made as eligible maidens would run through the vineyards with bachelors chasing them. When a bachelor caught a bachelorette, they saw it as a sign from Above that they were a match made in Heaven and would proceed to marry. This fascinating ritual would take place twice a year, on the fifteenth of the month of Av and on Yom Kippur as well. And lest you think that these relationships were short lived, the Talmud confirms that the love formed was deep and long lasting as it states that ‘there were no such joyous celebrations for the Jews as these’.

It’s hard for us to understand how love could be born from such a strange courtship. Were these couples truly intended to love each other just because they were caught in a game of ‘cops and robbers’?!

After many years of marriage, the old adage tells us that ‘familiarity breeds contempt’. Assuming that we did love our spouses when we first met, is it even possible to stay in love?

The secret lies in the unique connection between these two days: Yom Kippur and the Fifteenth of Av. On both of these days, G-d forgave the Jewish People for a major faux pas:

Yom Kippur is exactly 80 days after the Sin of the Golden Calf, when the Jews publicly worshipped an idol soon after receiving the Torah at Mount Sinai. It was on this day that G-d finally acquiesced to Moses’ pleas and declared “I have forgiven per your request’, marking this day forever more as the ‘Day of Atonement’.

The Fifteenth of Av marks the conclusion of the 40 years of wandering that were decreed upon the Jews after they refused to enter the Promised Land. The entire generation that left Egyptian slavery was doomed to die in the desert after the salacious libels of the Spies that scouted the Land. It was on this day that G-d allowed the Nation to proceed to enter the Holy Land.

It is this attitude of forgiveness that holds the secret to enduring love:

Rabbi Chiya was a Talmudic sage with a bad marriage. He and his wife would fight so frequently that everyone knew about their problems. Yet, at every opportunity, he would make sure to buy her beautiful presents. He even made sure that they were perfectly gift wrapped! When his father, Rav, asked him why he tolerated his wife and even spoiled her, he responded ‘because I am grateful for the good things that she does for me’.

No one is perfect. We all have characteristics we’d rather not have. Every relationship has its good sides and its dark secrets. But it’ s up to us to choose on what to focus.

Our ancestor Adam was handmade by G-d Almighty and placed into the beautiful Paradise in the Garden of Eden. Yet, when G-d asked him why he ate from the forbidden fruit, he proceeded to blame the very woman that G-d had created to keep him company!

On the flip side, there were Jews in Auschwitz who would wake up each morning and recite blessings of praise to G-d Almighty for all the wonderful blessings that He had bestowed upon them.

Consider the contrast— Some people live in Hell and see Paradise; others live in Paradise and all they can see is Hell!

Focus on the good. Be grateful for what you have. Life is so much more rewarding if you’re content in every season.

This isn’t just feel-good stuff. It’s real and it works. One of the most lucrative industries on Earth today is marketing- an entire profession built on focusing your attention on the positive sides of a product and steering you away from the negative. It’s not only that perception is 90% of reality, the Torah teaches us that our perception of something actually changes how we feel about it. That’s why we feel safer in a Volvo or more pampered in a BMW.

When we choose to see the good in our spouses, that actually changes how we feel about them. This doesn’t mean that they’re perfect, nobody is. It just means that you are making a conscious choice to be happy.

The Talmud tells of a Rabbi who refused to go to bed at night before he could think of some merit or defense for the defendant on trial the following day. This way he was assured of approaching the case without bias or prejudice.

Imagine if each night before going to bed, you made a conscious decision to identify three qualities of your spouse for which you are grateful. Instead of complaining about what’s wrong, be grateful for what’s right! The Torah tells us that this will transform how you feel about your spouse!

Imagine if each night you could identify one thing that you have now that you wished for years ago. Despite a sometimes rocky relationship with G-d, choosing to focus on what you are grateful for will work wonders on your relationship with Hashem!

You may not be where you want to be but you can look back and be thankful that you’re not where you used to be!

When a housewife once complained to the Rebbe about her husband who didn’t appreciate her, the Rebbe reassured her with the metaphor of a home. He explained to her that though the woman is the foundation of her home, people rarely notice the foundations, choosing to marvel over the finishes and furnishings instead. We tend to take what we already have for granted and to focus only on what we don’t yet have. It’s just human nature. But if we were wiser, we’d be grateful for the foundations that we already do have and we’d be so much happier!

Like the young couples finding true love on the days of forgiveness, when we make the choice to let go of the imperfections and focus on what we love about our spouses, we too will fall in love with them all over again!

Wishing you a month of setting your mind in the right direction each day as you find something to be grateful for.