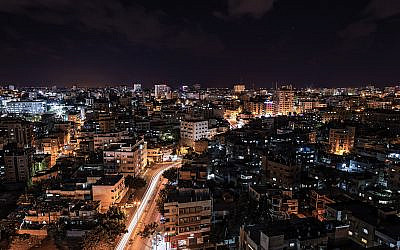 Part 5 of the Partnering for Palestinian Prosperity series

by Jon Simmons Co-Director of i61Collective

When Gazan, Sanabel, graduated with a degree in Architecture from the University of Palestine in 2017, she was under no illusion that the chances of gaining a full-time internship or graduate-entry employment in Gaza were slim.

Home to more than 2 million people, and lead by the internationally declared terrorist organisation, Hamas, Gaza’s territory’s economy has been at the verge of collapse, prior to the economically crippling COVID-19 outbreak. It’s unemployment rate has been pushed to the highest in the world; from 43 per cent in 2018 to almost 47 per cent in the second quarter of 2019. Many economists have highlighted the difficulty in measuring the true extent of the detrimental economical effects of the Egyptian and Israeli blockade on the movement of people and good and services, which has been in effect since Israel pulled out of Gaza in 2006.

According to Steen Lau Jorgensen, World Bank Country Director for the West Bank and Gaza, much of the youth are ‘economically hopeless’, as the current market in Gaza is not able to offer jobs leaving a large youth population unemployed. Almost all of the young and educated that I have interviewed for the Partnering for Prosperity series have said they would jump at the chance to leave to make a better life for themselves. 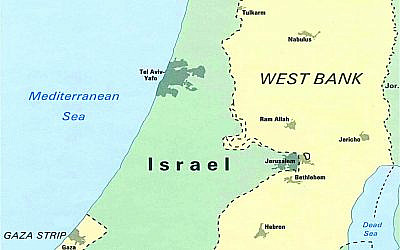 The Gazan graduate and business community have been confronted with a unique challenge: how to harness a notoriously well-educated labour force in a ‘frontier’ economy. Technological and business growth that Israel has enjoyed are thwarted by political unrest and violence in the West Bank and Gaza

Like many Palestinians in their twenties, Sanabel did not let the immediate environment hold back her determination to succeed. Sanabel signed up to Gaza Sky Geeks (GSG) Freelancing academy; where Gazans are trained in an array of sought after digital skills.

With funding from the international bodies Mercy Corps and Google Start-Up, GSG is Gaza’s first coworking space; a hub for local entrepreneurs and freelancers. It is the first academy to provide an essential foundation for its students and members to develop a freelance career building websites and apps for Arab and Western businesses. 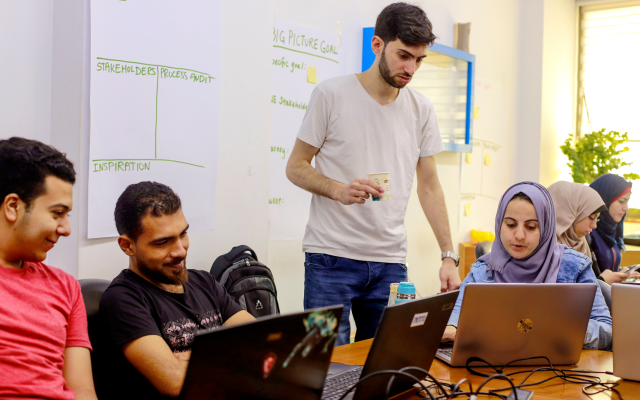 “My first job was a logo design for a law office in India. In the beginning, I remember I used to apply for a lot of jobs. They hired me because I placed the lowest price, which was 600 Indian rupee.  I had no clue this equals only $8. At first, he wasn’t confident that I could do the job well. However, he was pleasantly surprised by the outcome. He rated my work with 5 stars and gave me an additional tip”

Palestinian freelancers can earn on average between $30 to $60 per hour on many of the freelancing and outsourcing platforms. The median daily wage in the West Bank is $28 and just $11 in Gaza, according to the Palestine Economic Policy Research Institute.

Globally there has been a huge increase in the gig economy. In a sign of the rapid shift in the modern jobs market, as many as one in 10 working-age adults now work on gig economy platforms in 2019, up from one in ten as recently as 2016, finds the study from the University of Hertfordshire. 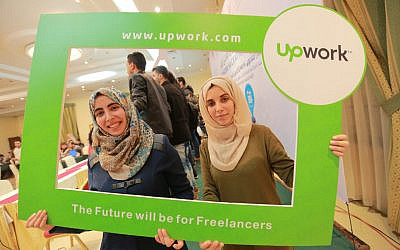 “Many Palestinians are “necessity entrepreneurs,” writes Adam Heffez in his Foreign Affairs article Shark Tank in Gaza. Entrepreneurialism is essential for those who are looking for an alternative to the crushing situation in Gaza.  Businesses are pioneered as a refuge from unemployment. Heffez explains, “That’s why small and medium-sized businesses constitute 98 per cent of the Palestinian private sector and employ almost half of the total workforce.” 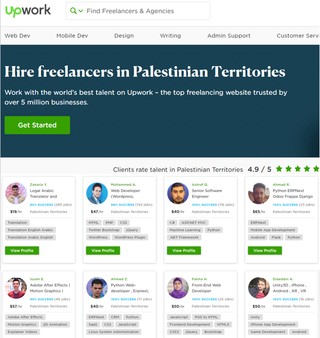 Freelancer: An Australian based platform that claims to be the world’s largest freelancing and crowdsourcing platform. 27 million registered users have posted over 13 million projects and contests to date.

Truelancer: An Indian birthed freelancing platform that has landing pages where talent from the West Bank and Gaza may easily be found.

Empowerment in Business across Gender, Race and Religion

According to the UN, more than half of the women in Gaza have experienced violence at home, and nearly 80 per cent have reported psychological abuse, yet 41 per cent of the entrepreneurs supported by Gaza Sky Geeks are women. Surely empowering women to achieve their full potential in the business world is the right road to equality?

Mr Abu Ewaida, a founding partner of Gaza Sky Geeks, has the credentials to back his positive outlook for Gazans. “Of course I am optimistic, there is no reason why the Israeli start-up nation should not reach Gaza as well. If all the youth, regardless of religion, nationality or geographic location join hands together — the world will be a better place for all. If we have a technological development for artificial intelligence and there is an Israeli company that deals with that, why shouldn’t we join hands out of mutual interest?”

“There is a grassroots desire for this to succeed, from around the world,” says Montauk, manager at Gaza Sky Geeks. “People want to see new solutions in Gaza, and they believe in the potential of entrepreneurship”

The UK Government has committed to help rebuild Gaza and the West Bank after the years of war and neglect by Hamas; pledging £38 million over five years (2018-2023) to support economic activity. This is more than double the amount of UK aid support previously provided for economic development in the West Bank and Gaza.

Elizabeth Shassere, author of Why I Mentor Tech Entrepreneurs in Gaza writes,

“I meet people who are used to overcoming extreme challenges while still full of optimism and hope for their futures. I witness people making things happen and making do with limited materials and resources. I see teams coming together to create opportunities for themselves in Gaza that many of us take for granted every day. “

Despite all economic and socio-political challenges, the realities of the start-up economy in Palestine remain promising. During the past two years, it has become clear that the Palestinian talent pool is growing, the start-up ecosystem pipeline is improving, incubators’ expertise is developing. We can see that with active encouragement from Western and Israeli businesses and consumers, Palestinians can be supported to shift from a donor dependency economy to an economically thriving, entrepreneurial and technically skilled region.

Now that we know how simple the process is, we can all play a part in extending our supply chain, and talent pool considerations, by employing Palestinians through freelancing.

Register your email address at openpalestine.com to receive releases on how we in the West can support Palestinians in their positive creative endeavours.