FIGHTING FOR FEMINISM – PALESTINIAN WOMEN THAT HAVE TRAILBLAZED FOR EQUALITY

How can a region truly flourish when the door of opportunity is only open to 50 percent of the population? In a region of the world with a poor track record for gender equality, some Middle Eastern women are defying the odds that are stacked against them.

In this series Partnering for Palestinian Prosperity, we follow on from the first article – Supporting Palestinian Businesses from Overseas by taking a closer look at Palestinian women who have battled the patriarchal system. These leaders are leaving a legacy and opening the door to a large number of Palestinian women that are leading in entrepreneurship and technology startups.

A recent report by The World Bank on the technology ecosystem found that there are 241 active startups in the Palestinian Territories of the West Bank and Gaza. This presents a significant increase from the 100 startups that Barack Obama referenced in his famous Jerusalem speech in 2013. According to most of the Palestinian entrepreneurs interviewed for this series, this promising development has been due to the tenacious work ethic of the Palestinian people and the high educational standard.

“Women are more prepared, they are eager to succeed, they are willing to go the extra mile and they are working harder to develop themselves,” says Palestinian Digital Entrepreneur Hassan  Qasem, founder and Chairman of Limitless KWB; Co-Founder and Managing Partner of Lime.

The tech startup ecosystem in the West Bank and Gaza 2018, World Bank Report. 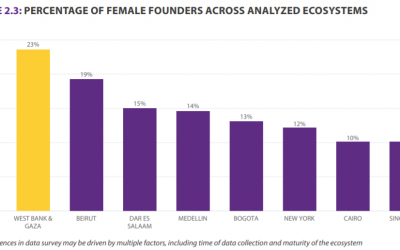 Who are these Palestinian forerunners for feminism, overcoming multiple cultural limitations and inspiring others to lead in technology entrepreneurship? Here are some of the key players that are running the good race..

Named by Forbes Middle East as one of the “Top 100 Most Powerful Arab Business Women in Listed Companies in 2012”, Ms. El Jack is a Senior Management and Business Development specialist with over 29 years of leadership experience in the Middle East and the USA.

Since moving to Palestine she has held several senior positions in leading companies – serving as the first and only female CEO and General Manager of publicly held Palestinian companies and Vice President of Investments in Siraj Fund Management Company, for example.

Palestinian property tycoon, Bashar Masri, saw Huda’s talent and recruited her in 2010 to help him establish Palestine’s first private equity fund, Siraj. Huda explains that due to Bashar’s quality of being gender blind in business, she was helped to advance in her own right as a recognized business leader in the region.

El Jack also served as CEO of Wassel Group, a publically traded on the Palestine Exchange (PEX) with a market cap of $13M and over 15,000 shareholders. Wassel Group is by far the largest Palestinian Logistics, Distribution and Corporate Support Services player in the country with offices. Throughout the West Bank, Gaza, East Jerusalem and Amman, Jordan.

With American Israeli Business Partner, Itai Kohavi, Huda established the International Peace Accelerator (IPA ) a US-based NGO. IPA takes a fresh perspective as an independent, non-governmental, non-partisan and unbiased organization, which is able to break down barriers to leadership within the conflict situation. The IPA’s initial focus is the Arab-Israeli-Palestinian conflict, particularly between the Israelis and Palestinians, and is supported by a growing number of international groups such as the Kellogg alumni, a large European university, along with leading academics and business people.

If the above wasn’t enough to stretch even the most capable, Huda has recently taken on the role of Managing Director of the “University of The People” in Arabic. UoPeople is the world’s first non-profit, tuition-free, accredited, online American university, which is dedicated to opening access to higher education globally. Huda joined the organization to establish and launch the university in Arabic in 2020.

When I asked Huda what more can be done by the West and by Palestinians to create a more inclusive culture, Huda said that Palestinian leaders, both publicly and privately, need to do more to create professional women’s network that mentor young women – preparing and empowering their participation in the board room.

Ambar is the Chief Operating Officer for Palestine’s startup investment fund, Ibtikar. It was thanks to Amleh’s pioneering work and fundraising that Ibtikar was first established, as she helped to design and structure the fund. Located in the de facto capital of Palestine, Ramallah, Ibtikar fills the funding gap faced by Palestinian entrepreneurs between seed and venture capital. 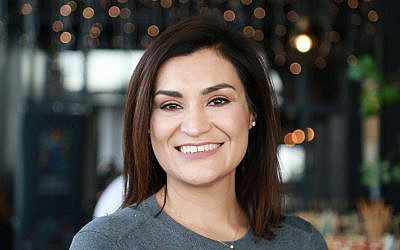 Ambah is the programme manager for Palestine for a New Beginning (PNB), a non-profit company focused on entrepreneurial development. Through PNB, Ambar organizes the yearly Celebration of Innovation, a Palestine-wide competition for entrepreneurs. Ambar negotiated a strategic alliance with Global Entrepreneurship Week (GEW), a yearly celebration of entrepreneurship, held simultaneously every November in over 140 countries throughout the world. She also negotiated a Strategic Alliance between PNB and Leaders Organization to support their digital entrepreneurship programs, including the FastForward Accelerator the first startup accelerator in Palestine.

At the young age of 17, despite objection from the local community, Lana went to the US study, choosing to return to Gaza as an engineer. In a very male-dominated field, her first job was managing a contractor in Gaza, where the contractor would not even look her in the eye. After successes in her field, she then went on to work for the United Nations. 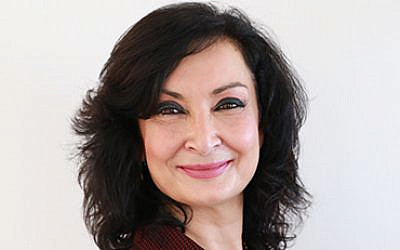 Lana has been the Country Director for Global Communities since 2003, leading the successful development and implementation of multiple developments and humanitarian assistance programs. For seventeen years, Lana fulfilled a series of roles with progressively increasing responsibility with the United Nations Development Program/Program of Assistance to the Palestinian People (UNDP/PAPP). In 2015, the BBC named Lana as one of the 100 most inspirational women in the world for the positive example and the hope she provides for young Palestinians, producing a short film.

Manal Zraiq is a Palestinian businesswoman and leader of one of the most innovative projects in the Middle East. She is an influential figure in national, regional, and international groups that promote women business leaders.

Today Manal is a key figure in the Bashir Masri’s Rawabi city project, the only privately-owned billion-dollar city in Palestine. The project makes a huge step in addressing Palestine’s unemployment problem, creating between 8,000 to 10,000 jobs in the construction stage and between 3,000 to 5,000 permanent jobs in tech and retail for the city’s inhabitants.

Manal continues to go beyond her own career success to promote economic empowerment and entrepreneurship for other Palestinian women, mentoring several rising stars. Manal is also a founding member and former Chairperson of the Palestinian Business Women Forum. BWF’s mission is to strengthen the role of businesswomen as leaders in the Palestinian economy through advocacy, networking, and the provision of business services.

Sign up to i61collective.com to be the first to receive releases on how we in the West can support Palestinians in their creative endeavours.

About the Author
Jon co-founded I61collective, a movement in the UK that facilitates grassroots creative projects in Israel and the West Bank. In the spring Jon supported the opening of the International Prayer Room in Bethlehem. The aim is to encourage Westerners visiting Israel to spend time in the West Bank, and find creative space for sanctuary. During the spring tour Jon met with Palestinian businessmen and women in the West Bank, to try to understand what they need from Western consumers and businesses to help them and other Palestinians build a financially independent and prosperous future. This inspired me to write a series of articles called Partnering for Palestinian Prosperity. The aim of the series is to demonstrate that under very challenging circumstances, Palestinians have persevered to build businesses and viable ventures that are worthy of active encouragement and investment. In 2018, Jon co-lead a group of international and local musicians as part of Music on The Wind tour, performing live to communities on ‘both sides’ of Israel and Palestine. The aim was to invest in the people through the healing and restoration power of live music, regardless of their background. Jon is also the founder of israelinvestment.org, a community that helps UK investors make informed decisions when investing in asset classes in Israel. Jon is passionate about the power of using business to bring cohesion between Israel and the Palestinian Territories.
Related Topics
Related Posts
Comments