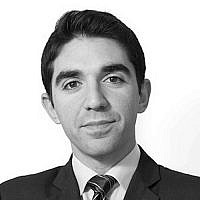 The Blogs
Gilad Kabilo
Think deeper.
Apply for a Blog
Please note that the posts on The Blogs are contributed by third parties. The opinions, facts and any media content in them are presented solely by the authors, and neither The Times of Israel nor its partners assume any responsibility for them. Please contact us in case of abuse. In case of abuse,
Report this post.

As yet another election looms, prospective challengers and newcomers can do three things to make sure nothing changes. A satirical column.

With general elections in March now a certainty, we have a chance to look back on the mistakes of past contenders who had hoped to unseat the government but failed, and identify the critical steps for contenders, new and old, who want to ensure the status quo. Reflecting on the last few election cycles, there are three critical things candidates and parties can do to fall short of their political goals yet again.

Minimize your options as soon as possible. Israel’s Knesset consists of 120 members — chess pieces on an ever-changing chessboard on which the political game is played. To win, it is vital to have as many options as possible by playing with the full range of pieces on the board and finding unexpected ways to utilize each piece. Therefore, to lose the election, a candidate will begin by immediately clearing the board of their own playable pieces by alienating and boycotting whole parties, sectors, and other politicians as soon as possible.

Before putting forth proposed solutions to the myriad of problems facing the nation, the prospective loser will first make clear who they will not, under any circumstances, partner with to form a governing coalition. This can, and usually does, including any and all Arab MKs, the entire ultra-Orthodox community, and even the country’s largest political party, along with its longest-running and most popular leader. Telegraphing an a la carte approach to governing by announcing boycotts early and often will ensure minimum maneuverability in the day after the election and perpetuate the status quo. More importantly, it will indicate the candidate’s flat refusal to work with communities that, like it or not, are an inseparable part of the country.

Make it personal. Elections have been about many things – economic issues, security concerns, the status of Jerusalem, and so on – but the last few have been about one man. To ensure falling short of votes (and Knesset seats) yet again, prospective challengers should make sure that this election continues in the same vein and run yet another highly personal campaign asking people to choose between Israel’s longest-serving leader and someone that they, relatively speaking, just met. Like it or not, Netanyahu brings a strong record and an unparalleled biography that plays on the heartstrings of many Israelis. He is hard to compete with on personal terms and his achievements as Minister and Prime Minister give many voters reasons to forgive him for his other shortcomings.

Therefore, those who wish to electorally underperform will repeat Bibi’s name as often as possible and ask voters to entrust them with leadership based on fanciful promises and clever tweets. They will not form a credentialed and cohesive team that has delivered on promises to the Israeli people, nor will they run an issue-focused campaign on responsibly managing the pandemic or providing economic relief to one million unemployed Israelis and untold thousands with closed of failing businesses. They will not give Likud voters the chance to switch parties without forcing them to frame their years of support as a mistake. They will fail to realize that many have lost trust in a legal system that has overstepped its mandate and a media ecosystem tainted by groupthink. Most importantly – they will continue to show themselves as contenders who stand only against one man, and not for much else.

Play the short game. It is a long way to Balfour Street, yet many contenders spend their time working on shortcuts, and some lose interest once the road gets too long. We have seen time and time again as new players enter the political arena on the merits of their name recognition or military credentials, and stumble once the rubber hits the road. While sudden entrances and sprints to the top have happened – most recently with the outgoing US president – this is not a strategy for success. Leadership requires learning, experience, and many years of hard work. Most egregious is the tendency of new parties and candidates to reach dizzying heights of support, putting them within reach of coalition leadership, before crashing down as the voters’ hopes make way for their bitter disappointment.

To ensure that their aspirations for premiership die in utero, new candidates should take their shot at the top seat as soon as possible, with little or no political, parliamentary, or ministerial experience. They should fail to build a strong and loyal base for their party or for themselves and neglect building trust over at least several years of strong performance and tangible success that improves Israeli lives. If their party inevitably loses support for a time, as all parties do, they should immediately abandon it or merge it with some new brand, instead of playing the long game and proving their trustworthiness by sticking to their guns, learning from their mistakes, and wandering the desert of the opposition for a while. This will ensure public scorn for their opportunism and show their voters that if the candidates themselves do not believe in what they are doing – voters shouldn’t either.

By adhering to these three principles, candidates can help lift the boredom of unemployment and intermittent quarantines for millions of Israelis by ensuring repeated election cycles for the foreseeable future. Let’s hope they don’t read this.

About the Author
Gilad Kabilo is a graduate student at Harvard University and editor of the Harvard Journal of Middle East Policy and Politics (JMEPP). A strategist, writer, and activist, Gilad has led global campaigns for Jewish organizations, worked with military leaders on Israel's national security strategy, and advised thought leaders on Jewish outreach and engagement. He lives in Washington, DC with his wife and two sons.
Related Topics
Related Posts
Comments